‘Wonder’ is sappy and predictable, but you should take your kids anyway. 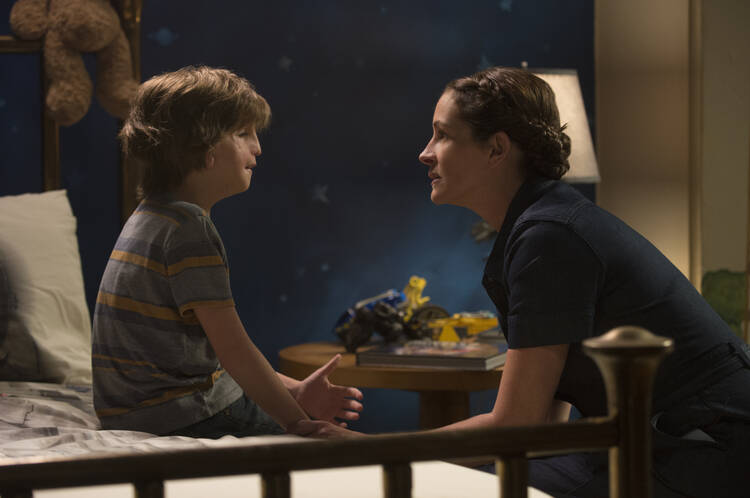 When the dog died, I said to myself, “They are gonna run out of trowels if they keep on laying it on this thick."

It’s not really a spoiler to reveal that the family dog dies halfway through “Wonder.” There can be no true spoilers in “Wonder,” possibly the most predictable movie ever put to film.

But that’s okay. It doesn’t set out to be Chekov. “Wonder”has a simple, specific goal in mind: to remind children (and adults) that kindness matters; that people are not always what they seem; that we all need mercy sometimes; and that strength and goodness ripple outward. And it achieves that goal.

The story, based on the popular novel by R. J. Palacio, centers on August Pullman (Jacob Tremblay), who is about to enter fifth grade at a new school, after having been homeschooled by his mother (Julia Roberts).

August has severe congenital facial anomalies, and has undergone countless surgeries to help him function and to make his face look more normal.

“Wonder” is a tween melodrama on a mission of mercy.

It doesn’t look very normal, though, and he certainly knows it. His tiny body shrinks at the prospect of showing his scars and oddly-shaped features at this new school, which comes complete with an arrogant bully who instantly shows his true colors.

“Wonder” leaves no emotional or dramatic trope unturned. Its intended audience is kids about the same age as the ones in the movie. For their sake, the colors are all vivid, characters are all drawn in clear, obvious strokes and inspirational maxims are delivered on a platter. It is, in short, a tween melodrama on a mission of mercy.

Usually, I’d rather expose my kids to a movie that’s too risqué or too violent, rather than a movie that cynically manipulates their tender hearts. But “Wonder” does not do this. It’s broad, and it’s calculated, but it’s not emotionally exploitative.

The movie doesn’t entirely shy away from the undeniable struggles of the boy’s life, either. A tearful Auggie asks his mother if it’s always going to matter to other people that he looks different, and she admits, “I don’t know.”

Another difficult truth: These loving, sacrificial parents inevitably neglect their older daughter, Via (Izabela Vidovic), as they devote themselves to their fragile son. Via is the most nuanced character in the movie. She loves August, and understands that her needs are not as urgent as his—and yet she does need more attention, and it is not forthcoming. Young viewers may feel that she does not entirely get what she needs, even after the movie has applied one of its tidy bows to her story arc. (She does get a boyfriend, though.) I hear from parents with special needs kids that this imbalance of attention is a constant concern, and there’s no good way of correcting it. So maybe the movie got that right, too.

“Wonder” insists we can learn something from, and even enjoy being with, someone who once frightened, repelled or disgusted us.

I struggled with the casual acceptance of the Pullman family’s wealth. If August had been born to poor parents with shoddy insurance, and the mom couldn’t afford to put her arty dissertation on hold to stay home, this story would have fallen to pieces. But it is, as I say, a melodrama, not a documentary.

“Wonder” flows skillfully through the seasons. It brings August from his first difficult school days, when he's unwilling to shed his beloved astronaut helmet; through Halloween, when he suffers his first betrayal; through Christmas, when he learns that other family members (and, sigh, the dog) have problems, too; past summer camp, where the last of his schoolmates' prejudices are cracked open; and deposits him tidily on the doormat of graduation, where he actually wins a literal medal.

The headmaster (a crinkly, bearded Mandy Patinkin) awards it to him for being the kind of person whose strength brings out the good in others. The music swells, everyone cheers, and out pops one final fortune cookie maxim reminding us to be kind, because everyone is fighting a great battle.

“Wonder” insists we can learn something from, and even enjoy being with, someone who once frightened, repelled or disgusted us. And so it was with the movie itself. There were things in it that frustrated and irritated me. I didn't want to like it, and I wanted to punch the soundtrack in the face.

But even from a movie like this, you can learn something, even enjoy it. I do need to hear, one more time, that kindness matters; that people are not always what they seem; that we all need mercy sometimes.