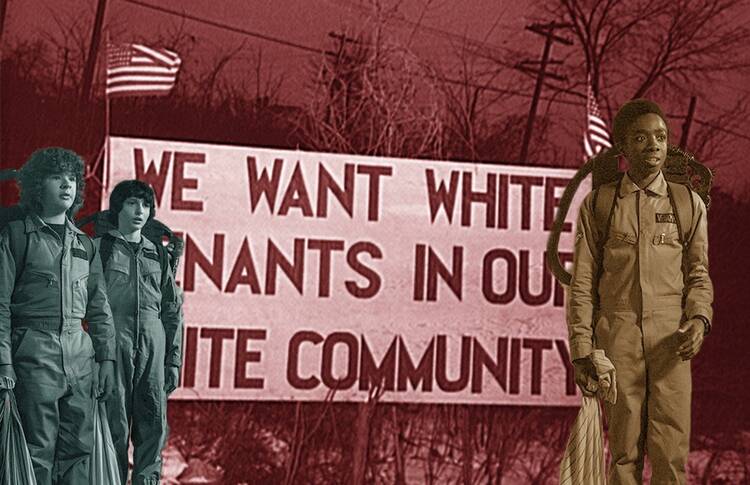 Front: Lucas, Mike, and Dustin from Season 2 of Stranger Things. Back: A sign erected by white tenants seeking to prevent blacks from moving into a housing project in Detroit, 1942. (Netflix, Wikipedia Commons)

There is much to love in the binge-worthy Netflix series “Stranger Things.” It offers an authentic portrayal of teenagehood, intelligent plotting, ’80s nostalgia and some genuinely touching moments. But the show also reflects an undercurrent of fear and hostility to federal government authority. The danger of centralized authority is a familiar theme in science fiction and fantasy. A distrust of government runs deep in American culture. Rebellion against tyranny is the story Americans tell ourselves about how we came to be. In comic book terms, it is our origin story. It’s not just the 1980s that are evoked in “Stranger Things”—it’s the 1770s.

Yet the real-life men who led the rebellion against Britain were deeply complicit in the sin of racism. Many owned slaves or sought to violently expand their new republic across a continent already inhabited by native populations. Today many Americans fail to consider the implication of the sins of the past or how we may benefit them from those sins. Many prefer the myth of our inherent goodness, a myth “Stranger Things” reinforces.

Season 1 of “Stranger Things” opens with four young boys playing Dungeons and Dragons. When I first watched the show, I immediately noticed the character of Lucas, the only character of color in the series who is named on screen. Lucas is a rare representation of a young boy of color enjoying an all-American boyhood—just like the white kids. (Geek culture is generally very white, and I can attest to the difficulty of being a geek of color.)

But Lucas is also underdeveloped. We only see his family once and they have no lines. (Season 2 makes up for this, when a sister and parents are introduced.) And Lucas’s race barely figures into the story. Even in Season 2, the intense hostility he encounters from the older brother of Max, a white female friend for whom he develops feelings, is left strangely unexplained. Imagine if the show’s creators chose to investigate the different ways Lucas and his friends grew up in Hawkins. Could Hawkins be a place haunted not just by the Upside Down, but by the ghosts of our country’s racist past?

There is so much to explore. How, for example, did Lucas’s family get to Hawkins? How aware of his ethnicity is he? What do his parents do? How did their neighbors first welcome them into the neighborhood? We do see Lucas’s middle-class home, so we can safely guess he shares the same socioeconomic background as his peers. We also see that his is one of the few African-American families in Hawkins. This is, of course, sadly true to what many small towns in the United States are like. The reason for this is simple: deliberate attempts by whites to prevent African-American and other minorities from living in their towns.

In 2015, the real-life town of Goshen, Ind., passed a resolution acknowledging and apologizing for being a “sundown town.” The term refers to places where racial minorities, especially African-Americans, were subject to violence, sometimes backed up by local laws, if found in town after sunset. In 1890, the black population of Goshen had been 21; by 1910 it was two. Here was a slowly emerging black world stifled and driven out of town to make room for the nice small town whites would build for themselves. The Goshen City Council’s resolution catalogued these and other wrongs as part of their apology.

Could Hawkins be a place haunted not just by the Upside Down, but by the ghosts of our country’s racist past?

Official sundown towns are a thing of the past. But desegregation was not an easy (or complete) process. Where integration did succeed, it often required the intervention of the federal government, most dramatically with troops enforcing court orders to desegregate schools. This history has everything to do with much of the resentment and fear of the federal government that we encounter in American politics and culture. It is no accident that the cry of “state’s rights” has been associated with resistance to civil rights legislation and court orders. The Confederacy itself—its cause the preservation of slavery—cloaked itself in the language of states’ rights and resistance to tyranny. Fighting tyranny has always been an American fantasy. And that fantasy has also been a narrative mobilized in the pursuit of racist ends.

If Hawkins were real, it might have been a sundown town, like the real town of Goshen. That might explain why Lucas is so racially isolated. But these are not truths “Stranger Things” is interested in exploring. This is the true importance of Lucas. He is far more than a token; his presence is central to the show’s appeal. Lucas allows the viewer to enjoy the fantasy of rebellion against the government without conjuring the ghosts of Jefferson Davis and George Wallace.

This is not a takedown of “Stranger Things.” I love the show. But it is fantasy, and not because of the monster from another dimension or its evil government agents. What is most fantastical is the idea of racial innocence, even of interracial friendships, separated from the context and reality of the nation’s racial past. In Season 2, we even see a black child pretend to shoot Police Chief Hopper with a toy gun. In real life, similar actions have gotten black and Latino children killed.

“Stranger Things” allows viewers to indulge in an idealized, comfortable vision of its past. But if we turn a critical eye to our own history, even within fiction, then perhaps we can begin to see how the sins of the past have shaped our present. There is no solid data on how many communities were sundown towns. You might live in a former sundown town today and not even know it. We need to dig into the history of our beloved towns, especially if we look around and see few people of color. If we can investigate the injustices of our pasts, then perhaps we can finally begin to make progress in seeking forgiveness and reconciliation.
More: Racial Justice / History / TV

Antonio De Loera-Brust is a Joseph A. O'Hare Fellow at America.

I think you’ve given the writers some food for thought for season 3.

Great article Antonio! It gave me a lot to think about. I was also interested in the approach to race in the show, especially given the young characters dialogue in season 2, episode 1. As the boys dress up as the Ghostbusters, they expect Lucas to have dressed up as the only black ghostbuster from the movie. That moment set me up to see the show in racial terms and made me think that Max's brother's rage towards Lucas was racialized.

I was around Elliot's age when E.T. came out and was so completely absorbed in that movie world that it wasn't until the car ride home when my older sister was pointing out the similarities to Biblical stories that "my eyes were opened" in a similar way you propose here for STRANGERS THINGS.
I had similar thoughts about the glaring exception that Lucas and then Lucas with red-head Max had in their "American small town." But being older than I was when E.T. came out, I chalked it up to the fact that the suspension of belief for this world/town is simpler than in real life. So there are a lot of "what-if's" or "how comes..." that I left aside. After all, it's hard to believe the this Faustian pact of the Upside Down is held in place by the likes of the town Sheriff and Dr. "Paul Reiser."
But your comments on sundown towns hits home. I grew up on the Jersey Shore in a catholic town. I was, and perhaps still am, the only asian boy to grow up there during the early 1970s to 1980s. Across the street was the Warren Hotel (now gone, but preserved in Robert Deniro's ONCE UPON A TIME IN AMERICA). Seasonally it was staffed by Irish waitresses up front and black labor from the Carolinas.
They both worked long, hard hours. But the former would sometimes be visible walking downtown or crowded into beach cottage rentals and participated in regular shoretime night life.
The latter showed up once on the boardwalk to swim (the beach is after all, one block away). And the cops showed up to enforce the fact that (at the time) the beach was private and only for Warren Hotel guests.
I grew up working with the Irish as a busbuy, talking to the black workers in the kitchen or out of the windows in the back of the hotel from my yard across the street.
It wasn't exactly a sundown town. But I was the only Asian boy. Externally, I imagine I must have looked a lot like what Lucas does to us viewers. But if we expand the context beyond what the show has showed us so far--you'd see more of the Upside Down. It was just across the street or a block away at the beach.
We were a Catholic town. An Irish town that had gotten passed "No Irish Need Apply." But growing up there, people often apologized to me in advance, when they were going to tell a "black" joke.