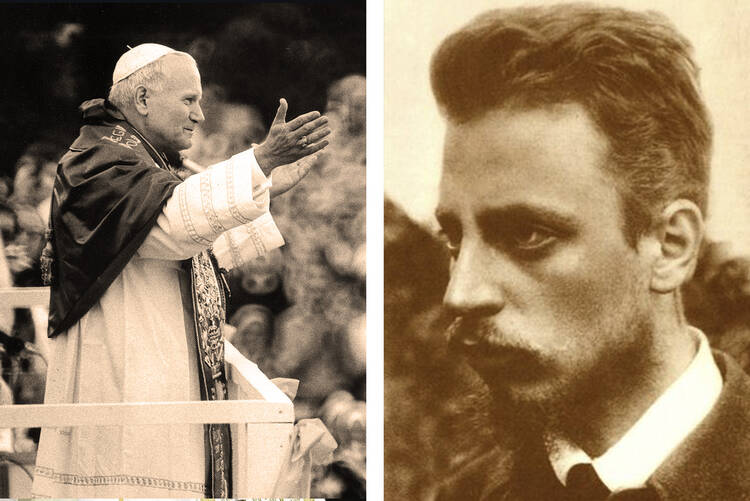 Things aren’t all so tangible and sayable as people would usually have us believe; most experiences are unsayable, they happen in a space that no word has ever entered, and more unsayable than all other things are works of art, those mysterious existences, whose life endures beside our own small, transitory life (Rilke, Letter 1).

When I was 15 years old, one of my high school friends lent me his copy of Rainer Maria Rilke’s Letters to a Young Poet. Published in 1929, these 10 letters—addressed to Franz Xaver Kappus—function as meditations on the artistic life. “If...one feels one could live without writing, then one shouldn’t write at all.” Passages like this inspired my dreams of becoming a filmmaker.

But I had not yet lived. I eventually went to film school for college, but I graduated feeling less of an artist and more of a technician and critic. College was also a time for me to fall in love. It was messy. I was an immature wreck. Now that I am 27 years old, like Rilke when he wrote the Letters, do his words feel more true?

I remembered Rilke while I was reading St. John Paul II’s Letter to Artists for the first time recently. John Paul explores the relationship between artists and the church. Both Rilke and John Paul are speaking to those who struggle with the question of giving one’s life to art.

How many people deceive themselves into thinking they are solitary geniuses? True solitude is about humility, not arrogance.

“Love is difficult,” writes Rilke in the seventh letter:

That is why young people, who are beginners in everything, are not yet capable of love.... Loving does not at first mean merging, surrendering, and uniting with another person (for what would a union be of two people who are unclarified, unfinished, and still incoherent—?), it is a high inducement for the individual to ripen...to become world in himself for the sake of another person; it is a great, demanding claim on him, something that chooses him and calls him to vast distances.

Instead of a distraction, for Rilke, love beckons us to encounter someone. In discovering the other person, we discover ourselves. But in this mutual discovery, the distances between two lovers is exposed. Paradoxically, love’s difficulty consists in sharing one’s solitude. To love is to learn how to be alone together.

Like love, solitude is about an encounter. The artist must confront his solitude. “Ask yourself...: must I write?... If you meet this solemn question with a strong, simple ‘I must,’ then build your life in accordance with this necessity,” Rilke writes in the first letter. Artists ought not to think of themselves as better than their teachers or peers but should instead experience their “necessity,” or vocation, as freedom. And in their freedom they will imitate God, who freely loves us so much it is as if he could not do otherwise.

If God creates us in his image, then we become that image by being creators ourselves.

According to John Paul II, if God creates us in his image, then we become that image by being creators ourselves. “The human craftsman mirrors the image of God as Creator,” he writes. This is beautiful if one already believes in God. But what about our “modern era...marked by the absence of God and often by opposition to God?” he asks. It seems pretty obvious that the church needs art, but does art need the church?

In his correspondence with Rilke, Kappus struggles with the belief in God. Rilke responds:

Ask yourself, dear Mr. Kappus, whether you have really lost God.... What justifies you then, if he never existed, in missing him like someone who has passed away and in searching for him as though he were lost?... Why don’t you think of him as the one who is coming, who has been approaching from all eternity, the one who will someday arrive, the ultimate fruit of a tree whose leaves we are? (Rilke, Letter 6)

For Rilke, God is not something that one possesses once and for all. He is more like a horizon of encounter toward which we walk. The way we internalize and share this path is through symbols, images, words and music. These are theological questions that have anthropological implications.

By working with symbols, both religion and art help us understand who we are and what our place is in this world. Just as Jesus Christ not only reveals who God is but also “fully reveals man to man,” John Paul writes, humanity “in every age, and even today, looks to works of art to shed light upon its path and its destiny.”

So, does art need religion? There is neither a clear nor easy answer. But insofar as both ask questions about how we relate to that which we are not, they will forever cross paths. For Rilke, though, the question is more important than the answer. “Don’t search for the answers, which could not be given to you now, because you would not be able to live them,” he writes in the fourth letter. “And the point is, to live everything. Live the questions now. Perhaps then, someday far in the future, you will gradually, without even noticing it, live your way into the answer.”

Live the questions now. Perhaps then, someday far in the future, you will gradually, without even noticing it, live your way into the answer.

John Paul II finds an ethic of the artistic life when reflecting on the parable of the talents and the way we share our gifts. This ethic consists in recognizing that our talents are gifts from God and it is our responsibility to hone them for the greater glory of God and his kingdom. I would extend that ethic even further. For example, the artists—whether explicitly religious or not—that I admire the most have resisted the temptation to give answers. Rilke’s Letters ultimately do not answer anything. They make you question your own way of living. It is like the Book of Job where the friends’ answers appear ideological when compared with God’s questions at the end. The invitation is, as Rilke writes in one of his poems, “You must change your life.”

Rilke’s words are still a mystery to me. I read him as a high school student looking for answers. Rereading him this summer, I found questions to reexamine my life. This one seemed particularly resonant: “Don’t think that the great love which was once granted to you, when you were a boy, has been lost; how can you know whether vast and generous wishes didn’t ripen in you at that time, and purposes by which you are still living today?”

The Theology of the Body Reconsidered
Sean Salai

For John Paul II, art reveals a lot about the artist. “In producing a work, artists express themselves to the point where their work becomes a unique disclosure of their own being,” the pope writes. Without a doubt, Rilke discloses his deepest self throughout his Letters. But I cannot help thinking about Kappus. He recognized Rilke’s Letters for what they were: not some powerful piece of advice but an epistolary poem.

The artist can strive for beauty and truth but he does not get to choose when—if ever—his work becomes art. A writer is only as vulnerable as the reader that dares to meet him. Perhaps, it is this beautiful encounter that is meant by the phrase John Paul II quotes from The Brothers Karamazov: “Beauty will save us.”

"It seems obvious that the church needs art"? Not obvious to me. At least, no more than any other community does. The era when the church was a great sponsor of art -- was hospitable to great creators of it -- is centuries past. Since 1950, only Olivier Messiaen comes to mind as a great artist whose creativity was bound up with the Church and his place in it. Others?

mmmm, since the church was made for man, not man for the church, the important thing is vication. thus it would be proper to say “ the glory of God rests in
man being fully alive”. now since art
is natural to man, as a vocation- meaning
the purposeful action of an individual soul in its duty to act upon Gods gifts to him- it is logical art is the expression
of faith forfilled ( Dante, Cezanne, Hopkins , Mozart ) , and a necessary condition to Justice. There can be no justice w/ o Mercy and the resulting
gratitude is expressed via
mystic, family, or artist expression.
St john of the Cross does both art n mysticism. etc.
for Catholics “ need” is not a negative
( as it is in utilitarians thought) but
rather the call to express the joy of full
life, man fully living ( saint Ireaneus )