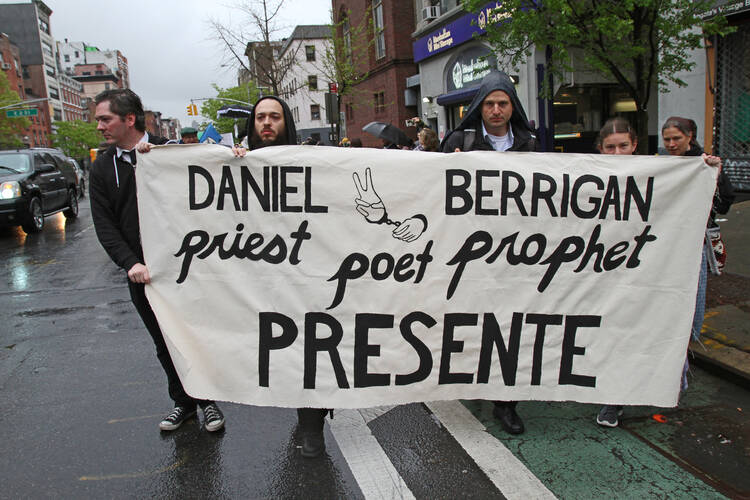 Mourners participate in a peace march on May 6 prior to the funeral Mass of Jesuit Father Daniel Berrigan in New York City (CNS photo/Gregory A. Shemitz).

As we mark the first anniversary of the death of Daniel Berrigan, S.J., on April 30, we seem to be in a season of protests: voters showing up in droves to town halls held by their congressional representatives, spontaneous demonstrations at airports against President Donald J. Trump’s travel bans, and both immigrants and women asserting their importance by striking or staying home from work. It is easy to imagine Father Berrigan among the protesters, linking arms in the street.

The state of social justice poetry is also strong. Some of today’s most lauded young poets have taken up the mantle once worn by activist poets like Berrigan, Adrienne Rich and Amiri Baraka.

Berrigan worked passionately for peace and antinuclear causes from the Vietnam era onward, even facing arrest in 2003 at age 81 for trespassing during a demonstration at an armed forces recruiting station in Times Square in New York. His poetry, most often in free verse, reflected his Catholic faith, while it also questioned injustices and urged action to end them.

Poets still write work that addresses tough questions: How do we live and act in solidarity with our neighbors, welcoming the stranger?

Poets still write work that addresses tough questions: How do we live and act in solidarity with our neighbors, welcoming the stranger? How should the government and larger society treat individuals, especially those who live in poverty or in any way are vulnerable? And how can we reform flawed institutions?

One organization, called Split This Rock, hosts workshops and a biennial festival of “socially engaged poets,” as well as an online database of poems. Its mission is to encourage “poets to a greater role in public life,” and plenty have answered its call.

Some socially concerned poems have gone viral through social media, like Ross Gay’s “A Small Needful Fact.” In 15 compact lines, Gay forms a poignant image of Eric Garner, a man who died after being placed in a chokehold by New York police:

Is that Eric Garner worked

for some time for the Parks and Rec.

perhaps, that with his very large hands,

perhaps, in all likelihood,

he put gently into the earth

some plants which, most likely,

some of them, in all likelihood,

and feed small and necessary creatures,

for us to breathe.

The single sentence here moves slowly, interrupted by clauses like “perhaps” and “in all likelihood.” We know Garner’s story, but Gay tells us something new: that Garner worked for a horticultural department. Gay heightens the sense of tragedy in the final image of plants that make it “easier/ for us to breathe,” which calls to mind Garner’s plea, captured on video: “I can’t breathe.” The poem does not preach an explicit call to action but instead encourages readers to see Garner as a human being worthy of breath.

According to a 2014 study, reading poetry activates parts of the brain related to memory and introspection, stirring the emotions much the way music does. Poems like Gay’s—or other “poetry of witness,” as it is sometimes called—can remind readers of inequities and prejudices and inspire them to work for justice.

At first glance, the Catholic tradition of social justice activism is not as evident in contemporary poetry as it was in Berrigan’s time. The concerns of these poets often overlap with Catholic social teaching, but not always. In this environment, few poets call themselves “Catholic poets,” even if they otherwise identify as Catholic.

Natalie Diaz might be a good model for an alternative “Catholic poet” fitting this age. The author of a much-praised book of poetry, When My Brother Was an Aztec, Diaz has won numerous awards. As a member of the Gila River Indian community, she works to preserve the Mojave language and has spoken about a need for environmental justice for the Standing Rock Sioux Reservation and Colorado River communities. In a 2015 poem, she writes, “My river was once unseparated. Was Colorado. Red-/fast flood. Able to take// anything it could wet—in a wild rush—// all the way to Mexico.// Now it is shattered by fifteen dams/ over one-thousand four-hundred and fifty miles,// pipes and pumps filling/ swimming pools and sprinklers// in Los Angeles and Las Vegas.”

Her poems also describe going to Mass and use images of rosary beads, statues of the Virgin Mary and holy water. In “Reservation Mary,” Diaz creates a Native American character, Mary Lambert, whose life story echoes the Virgin: pregnant and unwed, later wanting water to be turned into “E & J Ripple” wine. Some of Diaz’s most powerful poems describe a fraught relationship with a drug-addicted brother. “My parents crossed fingers// so he’d never come back, lit novena candles/ so he would,” she writes in her book’s title poem.

Diaz’s poetry does not identify itself by devotional or dogmatic statements (in fact, some Catholics might object to subject matter like her portrayal of her female lover’s body in religious terms). Instead, she shows the sacramentality of everyday life and the challenges—including poverty and drug addiction—sometimes faced by the marginalized. Her work typifies a vibrant, varied literary culture interested in the ways in which differences matter and even enrich our experience.

Such empathy is voyeuristic and empty if readers fail to take any further action.

In an interview in 2012, Diaz described her experience growing up with both Native American and Spanish Catholic traditions: “In my house, there is enough room for all of those cultures, for all of our religious beliefs, for all of our different kinds of expressions of faith, and so for me that’s exactly the way I write. I can mix images from my reservation with images from my Catholic faith, with words in Spanish, with words in my Mojave language and other influences.”

She also warns, in a recent interview with Kenyon Review, that she is “skeptical of what witness has become in poetry,” in part because she is wary of empathy, which she calls “selfish.” “We can’t have empathy for the people we drop bombs on because we aren’t afraid bombs will be dropped on us,” she says.

In other words, social justice poetry can fail if people who are privileged and safe feel that just because they have read a poem about war, they have experienced the feelings of those who are terrorized by war. Such empathy is voyeuristic and empty if readers fail to take any further action.

Moving beyond insincere empathy is on the mind of another poet who serves as a model for the new Catholic poet, Philip Metres, the first recipient of the George W. Hunt, S.J. Prize for Excellence in Journalism, Arts & Letters, an annual award given by America Media to writers under 50 who “employ a Catholic imagination in their writing.” Metres’s influential book of poetry, Sand Opera (2015), arose out of a Lenten devotion reading the stories of those who were imprisoned in the notorious Abu Ghraib prison in Iraq. As he told Vatican Radio, “I thought of it as a Lenten project because...the torture itself echoes for me the greater story of Lent and Easter season, the great pains that Jesus endured and his death.”

In the final poem of Sand Opera, “Compline,” Metres strings together images from the 2003 Iraq war as the speaker prays that “Every improvised explosive, Talon & Hornet, Molotov / & rubber-coated bullet, every unexploded cluster bomblet,// Every Kevlar & suicide vest & unpiloted drone raining fire/ On wedding parties will be burned as fuel in the dark season.”

The poem concludes: “My God, my God, open the spine binding our sight.” This is the instinct of today’s socially concerned poems: to open the sight of their readers, to serve as witness to suffering and injustice. 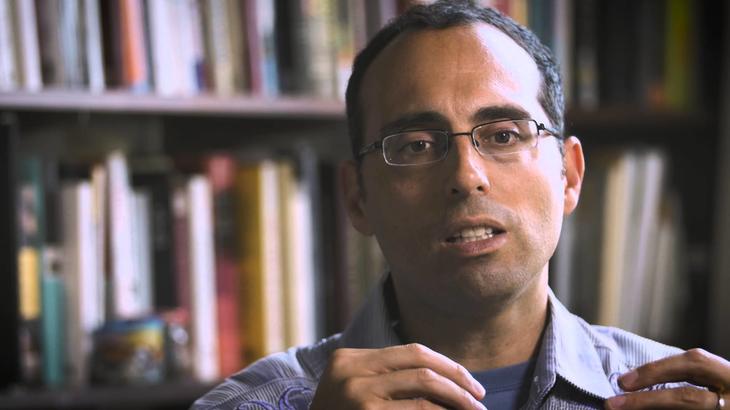 We can include here other Christian poets who have expressed God’s call to justice in their poetry. Maria Melendez Kelson, for example, a Quaker poet and author of two books, has been featured at the Split This Rock festival. Her sonnet “Love Song for a War God” shows the complicated nature of poetry responding to issues of injustice or war: “We have learned that all men’s tears/ are not created equal,” the poem says. “We were wrong/ to offer flames to quell your fires. Still,/ I must dismember you inside this song.” She speaks directly to the god of war, acknowledging that violent conflict has disproportionate effects and attempting to “dismember” war within the act of writing the poem. However, the speaker is complicit in a way, as part of the “we” who waged war.

Many of Kelson’s poems fall within the genre known as ecopoetics (poetry concerned with environmental issues) and illustrate elements of Latino Catholic culture. In “Oda a Doña Lancha,” she describes a woman taking a statue of John the Baptist to a creek where she “baptizes The Baptizer, bathes/ her San Juanito in that little creek to increase/ the likelihood of downpours/ in these months of drought.” Water is also a concern in “Llorona’s Guide to Baptism,” from her first book: “As for the water: any creek/ with fish storing enough mercury/ to damage a human fetus/ will do.” In these poems, Kelson points out that the instrument most associated with baptism, water, has been damaged by industrial runoff or dried up in particular regions because of climate change.

Just as Catholic social teaching calls us to cooperate with believers of different faiths, so too could we consider poets like Kelson as speaking to Catholics about issues we share in common. In one of her most powerful poems, “Good Friday,” she shows us what it is to be human, created in original sin and freed only by someone else’s suffering: “Jesus I want my sins back,” the speaker says. “If you take away my inordinate cravings,/ what the hell’s left?...?/ I want them all back if they’re/ so To Die For. Else shred my palms,/ wash my face with spit, let the whip/ unlace my flesh and free the naked blood,/ let me be tumbled to immortality….” It is impossible to separate ourselves from our sins unless we acknowledge how we share in the sufferings of Christ.

In 2012, fewer than 7 percent of adults reported reading poetry during the previous year. However, a vibrant literary subculture exists for those interested in social justice issues and hungry to feel a renewed sense of activism. This socially conscious poetry may be preaching to the choir in many cases, but perhaps this is what it should do. The choir needs a fire lit under it too.

Lisa Ampleman, the managing editor of The Cincinnati Review, is the author of a collection of poems, Full Cry, and a chapbook, I’ve Been Collecting This to Tell You. Her poems and prose have appeared in the journals Poetry, Image and Notre Dame Review.

I was on active duty during the 1960s, and I remember the Berrigan brothers in a different light than how they are now extolled.