Disney parks want us to escape reality, but real-world conflicts are sometimes unavoidable 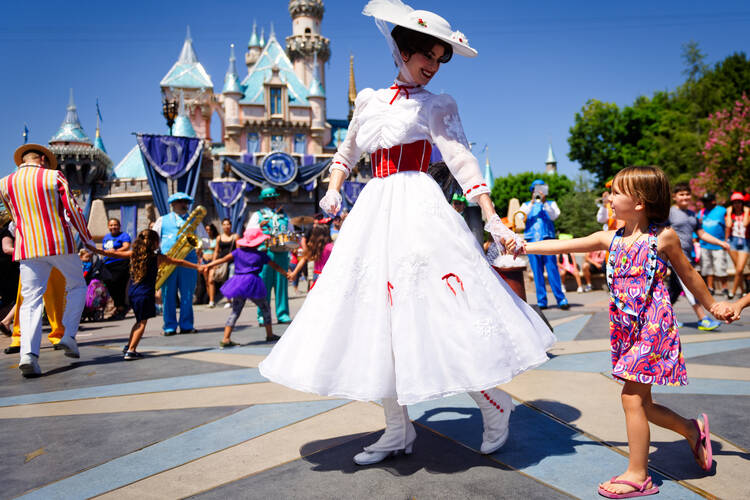 Mary Poppins smiles at a young child as she leads a line of children in song and dance in front of Cinderella's castle during Disney's 60th Diamond Celebration. (iStock)

On June 29, Disney announced that as part of its ongoing renovation of old attractions, it would be removing the “wench auction” scene from its popular Pirates of the Caribbean ride.

Many people online have expressed outrage. “Never have any of these wonderful scenes ever made me think of negative things!” wrote one fan on the Disney Parks Blog. Another posted, “I want to point out that the attraction was never meant to be historically accurate. The attraction has always been about the FUN, ROMANTICIZED side of piracy.”

Some in the press have also seemed to question the decision. The Los Angeles Times called it “a PC makeover.” The Orange County Register wanly noted, “While the scene has long been a favorite of many Disney fans, it has occasionally been the brunt of criticism for what some believed to be a ‘sexist’ approach to women.” (Really, O.C.R.? The best you can do is air quotes and “some believed”?)

Nor is this the only political tussle Disney parks find themselves in at this time. Rumors circulated in May that Disney and White House staff were in conflict over the script for the animatronic version of the president to be placed in Walt Disney World’s Hall of Presidents attraction, with some suggesting Disney would be cutting the speaking portion entirely. Disney has since confirmed that the animatronic Donald Trump will in fact speak.

A major part of what makes Disneyland “the happiest place on Earth” is the lengths to which it goes to keep out the conflicts and issues of the real world.

A major part of what makes Disneyland “the happiest place on Earth” is the lengths to which it goes to keep out the conflicts and issues of the real world. Controversial clothing is not allowed. Alcoholic drinking options are limited. The park is even designed in such a way that you cannot see or hear anything outside it. This is not meant to be just another amusement park; it is your very own Magic Kingdom.

At the same time, you can only get in and out of Disneyland via Main Street, a quaint, idealized version of Walt Disney’s Missouri hometown. Many of its earliest attractions—the Mark Twain Steamboat, New Orleans Square, Tom Sawyer Island, and the aforementioned Hall of Presidents—likewise attempt to transport visitors into classic Americana. (Disneyland’s “Great Moments with Mr. Lincoln” includes an animatronic Abraham Lincoln performing some of his greatest speeches.)

All of which is to say, a wholesome vision of the United States is baked into the park’s DNA, one that is hopeful, communitarian and 1950s-provincial. (See: “It’s a Small World.”) And as much as Disney parks want to help us to escape reality, conflicts and occasional alterations would also seem unavoidable.

All of which is to say, a wholesome vision of the United States is baked into the park’s DNA, one that is hopeful, communitarian and 1950s-provincial.

Are changes like this a bad thing? It depends on how we understand ourselves and the United States. To label a move “politically correct” is to argue it is on some essential level false, a sort of moral posturing to score points. Sometimes that critique deserves a more serious airing than it gets (even if accompanied by heaping helpings of insults like “social justice warrior” and “snowflake.”)

But it is also true that to be human is to be engaged in an ongoing process of self-discovery. We never see ourselves all at once or fully. Rather, new experiences provide new information, which cause us to adjust how we think and act. Friends realize they are in love, people discover they want a different career and post-credit scenes in superhero movies become the worst thing ever.

Likewise, the fundamental principles of our country persist; but individuals and events have challenged us to face their deeper implications. How can we say that everyone has the right to life, liberty and the pursuit of happiness and then treat some as property, force others to work in dangerous conditions or deny whole groups the right to vote? On one level U.S. history is the ongoing story of our country’s struggle to see and overcome the relative inadequacy of its practice in light of its principles.

Now, we are just talking about one scene on a children’s ride; we are not exactly solving misogyny or human trafficking here. To that extent maybe Disney’s critics have a point. Hop off your high horse, sunshine; if you want real change, get to work.

But on the other hand, self-awareness is like the sketch of the young woman looking away that also turns out to be a profile of an older woman’s face: Once you see the problem, you can’t unsee it. There may have been some halcyon age when we could all look at the Disney’s Pirates ride, with women being chased around their burning homes by leering fat men with cutlasses, and think, “You know, this is really funny.”

But while some may still feel that way, may even cling to moments like the “wench auction” precisely because they embody that reassuring escapism that Disney promises and delivers, our world has moved on. And the challenge for us is to change with it. Drink up me hearties, yo ho.

Imagine if the ride had a "slave auction" rather than a "wench auction". There would be outrage, and I don't think anyone would describe it as the "FUN, ROMANTICIZED side of piracy".

"The attraction has always been about the FUN, ROMANTICIZED side of piracy.”

Piracy is just a bunch of boys-will-be-boys guys out having a good time selling women. What's so wrong that? #drippingsarcasm