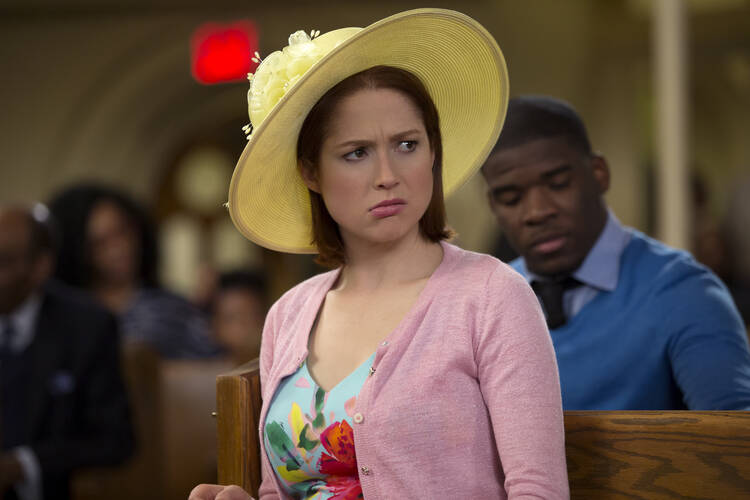 When it comes to television shows, I am an embarrassingly late adopter. I have only seen the pilot of “This Is Us.” I know, you think it is amazing, watch it with your family and are crying right now just thinking about it. I nod warmly in your direction, affirm you as a human being and still will not watch it.

It took me three years to get beyond the pilot of “Breaking Bad.” (A chemistry teacher drug lord—really?) I have only seen shows about “real” housewives or house renovations when I have visited my parents. And to this day, I refuse to watch “The Big Bang Theory” (and I say this as someone who loves science, Bob Newhart and comic books).

Imagine a sitcom about a modern Cinderella but instead of being beaten down by a mean stepmom she has been abducted by a cult leader.

Given my track record, Netflix’s “Unbreakable Kimmy Schmidt” was not likely to be a show that I would ever view. Imagine a sitcom about a modern Cinderella, as ridiculously upbeat as a Disney princess, but instead of being beaten down by a mean stepmom and her wicked step-sisters she has been abducted by a cult leader and held in an underground bunker in Indiana for 15 years with three other women he has convinced he has saved from the apocalypse. We meet Kimmy as police bring her and the other more or less brainwashed women into a world that, they are surprised to find, has not only not ceased to exist but also no longer appreciates a solid high five.

In other words, it is your typical fish-out-of-water, small-town kid comes to the big city kind of tale, with the twist that the kid has some serious PTSD issues.

But when “Kimmy” debuted two years ago, it did have one major selling point: It was created by Tina Fey and Robert Carlock, makers of the fantastic NBC sitcom “30 Rock.” And right from the start, the show seemed to exist in the same hilariously weird universe as its predecessor. Fleeing the attention of being one of the “Indiana Mole Women,” Kimmy (Ellie Kemper) moves in with the gay, aspiring Broadway star Titus Andromedon (Tituss Burgess) in a run-down, drug-infested part of New York City called East Dogmouth. Their landlady (comedy legend Carol Kane) grew up as part of a human diorama in the Tenement Museum. Kimmy’s boss (Jane Krakowski) is a WASPy trophy wife who has no interest in her children. And Kimmy’s room is actually a closet. But she is excited; she has a bedroom with a door!

Like “30 Rock,” the writing is quick and screwball and loves to take everything that is ridiculous about life one step further.

This is a world where Teddy Ruxpin dolls scream “white lady,” pharmaceutical executives drink from “Mordor” coffee cups, Sean Penn is just a story made up to scare kids and N.F.L. football owners watch music videos of their mistresses lying on convertibles while singing “I ‘Spensive.”

Like “30 Rock,” the writing is quick and screwball and loves to take everything that is ridiculous about life one step further. “You make Patti LaBelle sound like Barry White,” Dionne Warwick tells Titus about his singing in season three. “And I should know because I’ve done EpiPens on both of them.”

Everything that was sad or infuriating becomes silly, relatable, even human. We are all trying, and we are all fools.

But even as “Kimmy” is emphatically about this hopeful woman moving forward through this bizarro world, it also continues to draw on the trauma of her abduction. The second season is a standout, as a binge-drinking shrink (played by Fey) helps Kimmy see that a major part of what she is dealing with is not the bunker at all but the fact that her mother did not save her. The finale, in which Kimmy confronts her rollercoaster fanatic mom (Lisa Kudrow), is not only hilarious (the entire confrontation takes place on a rollercoaster) but in its own way quite real. “You were a bad mom,” Kimmy shouts at one point. “And you were never there for me. I packed your lunch every day. And you never ate the fruit!”

I once vented to another Jesuit about trouble I was having with someone. He responded with perhaps the oddest suggestion I have ever heard: “When I’m really angry at someone, I try to imagine them as a muppet. It’s very difficult to feel threatened by muppets.”

In a way, “Unbreakable Kimmy Schmidt” is that idea applied writ large. It takes on pretty much everything about life that is hard—poverty, loneliness, old rich white men who somehow still run the world despite having at this point a ridiculously bad track record, break-ups, not knowing what you want to do with your life, being held hostage for 15 years, TV shows that use flashbacks to make you think you want to cry when you don’t, you really don’t—and makes it all so much bigger and more absurd. As a result, everything that was sad or infuriating becomes silly, relatable, even human. We are all trying, and we are all fools.

The world of Kimmy Schmidt looks nothing like how most of us would imagine the kingdom of heaven. And yet, having witnessed its optimism, wackiness and unexpected heart, I wonder. As Fey’s Liz Lemon would say, I want to go to there.

Without any animosity or insult intended (sincerely like Kimmy), it is just amusing that her look in this particular photo reminds me of someone in the Trump administration.