Sports and Morality: When Death comes to the JV basketball star 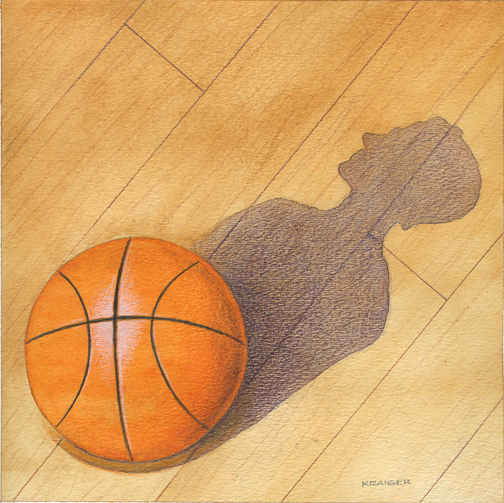 We hated Bernards High School. Hated their pretentiously pronounced name, their zone defense and their lanky coach, whose white vest clashed with his team’s red uniforms. The varsity team was going to lose later that night—their losing streak would extend for another full year—but our junior varsity team usually had a chance.

Not this time. Bernards took J.V. seriously, and they had Colin Kelly. I’d heard whispers of him from guys on the track team, especially the high jumpers. He was only a sophomore but looked like a senior in college. He wasn’t particularly big or built, but he looked mature, a man in a teenager’s body. He was fast, and he cut to the basket with determination, his freckled face scrunching from the slightest exertion.

Colin scored 12 of his team’s first 16 points: three layups and three mid-range jumpers. He hadn’t missed a shot yet. During the time out, our coach turned to me and said I would cover the infamous number 25. This was no time to argue. I took my assignment and was promptly embarrassed. Colin drove past me with a smirk, and the next time down, popped a jumper in my face. I shot up a wayward hand to block, but it was a worthless attempt. By the end of the first quarter, I was exhausted, only had a handful of points, and we were down 27 to 6.

I couldn’t stop Colin Kelly that night. I never got another chance. Months later, when I asked a friend if Colin won the high jump at our dual track meet, he said Colin was dead. My mom clipped the obituary notice in the paper the next day. He was 16.

Athletes are not supposed to die. I knew they did not live forever—I’d seen Pride of the Yankees, heard stories about Roberto Clemente and Thurman Munson—but absence was something other than death. Death was final, and until 1997, I had never personally known an athlete who died. I heard that Colin had a heart attack in a supermarket but never knew for sure.

Some people thought it must have been steroids. I am sure the reason was more prosaic—a health condition that had been dormant for years, maybe. Still, everybody on my team quit downing their afternoon protein shakes, and I stopped gulping grape juice and creatine.

Yet we didn’t stop training.

Whippany was, in fact, more of a soccer town than a basketball one. It was full of Italian and Portuguese kids who played long past dark in our trimmed suburban fields or ventured to the dusty fields of Newark’s Ironbound section. When I think about the two sports I played in those days, soccer and basketball, my relationship with both Colin Kelly and the limits of the body is brought into sharper relief.

When I played against someone better in soccer, someone faster and stronger and more skilled, I could resort to other tactics, such as well-timed slide tackles. Those takedowns were never clean, but the referees didn’t seem to care. It was easy to hide a foul under an overcast sky, shade a heel in rain-soaked grass. We were hard-nosed bruisers who bled through our shin guards and snuck elbows during free kicks. If we didn’t have the skill to overwhelm our opponents, we simply had to fight with everything we had.

Things were different on the hardwood. We could be dirty on the soccer field, but we had to be more graceful and clean on the basketball court. We couldn’t win games with sheer force, throwing elbows and bruising through the defense. If we fouled, it happened out in the open and we were whistled down. We were exposed.

Colin didn’t need brute force. He excelled because of his pure athleticism. Had I played him in soccer, maybe I could have taken him. He probably would have seemed mortal on a soccer field, like the rest of us, and his eventual death a bit less shocking. But basketball was his game, it was where he peaked and where he seemed more alive than the rest of us.

Around the same time, I learned that Jim Fixx, the noted marathon runner and writer, had died during a run. Football players in the South were collapsing during practice. Only a few years earlier, Loyola Marymount basketball star Hank Gathers died during a game.Our coaches eased up on conditioning, and I no longer went for my midday runs in blistering heat. I had always thought that sports were a safety net. If the body was moving and sweating, it could not possibly die.

But athletes are not always in motion. Bodies fatigue, muscles weaken, hearts are fragile; it is the end of a sprint on a track’s straightaway, how the lungs lift and breath stops for a moment. The barest glimpse of a life come to halt. We expect the oxygen to come back, to settle our shoulders and ease us off the track and back to our cars and lives, but it doesn’t always happen that way. Sports can push us to the brink, can push us off that cliff. Maybe that is the subconscious appeal of straining the body: how we might tempt death through a game.

If the wider world is unpredictable, at least sports have boundaries and fouls and rules. Sports can surprise us, but those surprises are more often pleasant than painful. We want to believe that we can move like wild—that we can sprint and rebound and defend—and then we can leave the game on the court. Yet our hearts likely know otherwise: The desire to excel on the court is the desire to transcend our bodies. We not only want to push ourselves, we want to break free of our skin. An athlete at the top of his or her game not only has mastered their body but has left their body behind.

Still, great athletes like Colin inhabit fragile bodies, as we all do. The best aren’t supposed to die at their peak, but they do. There is a fine line between pushing one’s body and running it into the ground.

I still remember how it felt when Colin burned past me toward the basket, that second of scholastic public hopelessness—that feeling of being in the presence of true talent—and somehow that memory feels like an ode, an offering.

Nick Ripatrazone is a teacher and the author of several books.

@nickripatrazone
Show Comments (
1
)
Comments are automatically closed two weeks after an article's initial publication. See our comments policy for more.
Lisa Weber
4 years 10 months ago
A 16 year old athlete who died of a heart attack mostly likely had an undiagnosed congenital condition - like long QT syndrome. When someone exceptional dies young, it seems especially unfair. It's difficult to reconcile such deaths with the idea of a loving God.