'Heal the Living' and the miracle of organ donation

'Heal the Living' and the miracle of organ donation 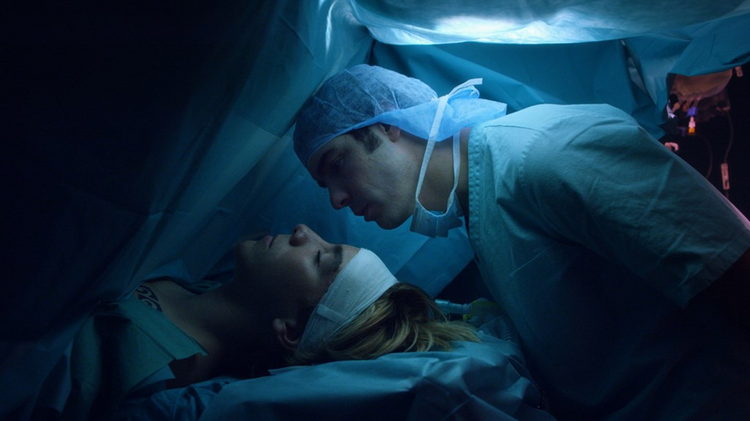 A scene from 'Heal the Living'

It is almost dawn as 17-year-old Simon (Gabin Verdet) pops out of his girlfriend’s bed, dresses and, with one glance back, drops out her window and takes off on his bike. Joyously racing through the streets of the French port city LeHavre, he meets a friend, who races along with him on his skateboard, until they pull up at the beach and join a third pal for a plunge and surf on the arrogant ocean waves. Dawn lifts the darkness as they mount their surfboards and the sea roars like a team of angry monsters daring the young men to defy them. Simon dives deep and the camera shoots him from below. Is Simon drowning? Is he going to die? Yes, but not now.

Exhausted, the boys catch a bus back to town, Simon and his friend resting their heads on one another’s shoulders. The driver, tired, keeps blinking. In a flashback we see Simon meet a pretty girl at a trolley stop and race her trolley up a steep hill on his bike so he can kiss her at the top.

Simon’s parents have been called to the hospital. As spouses, they are separated, but their son, lying shirtless and silent, attached to wires and tubes, brings them together at his bedside. He is brain-dead, and, as they depart, the medical specialist, Thomas (Taher Rahim), takes them aside and delicately invites them to sacrifice Simon’s organs so that somewhere, someone else may live.

Their immediate reaction is shock, but their answer is yes. This is a film with very little dialogue, but we know the characters intimately by watching them in these most intimate moments, and in these moments we are being invited to love them.

There is hardly a religious word in all of “Heal the Living,” but the film doesn’t need them.

Miles away in Paris, the heart of Claire, a fragile, middle-aged woman, a former musician with two college-age sons who love her and a husband somewhere whom she has not seen in a long time, is failing. Sometimes she has to be carried up a flight of stairs.

What follows, back in LeHavre, are scenes unique in the history of cinema. Thomas asks the assembled surgeons to pause as he bends down and whispers into dead Simon’s ear an affectionate message from his family and friends. If and how this message is heard depends on the faith of the audience.

We watch as the scalpel cuts into Simon’s bare chest, gloved hands help open the wound and snip snip delicately at veins and muscles, and human hands plunge into the hole and lift this beating central engine of life from its home, quickly bury it a box of ice and pass it to waiting officers who rush it to the airport and take off for Paris.

"Frantz" may be the most Christian film you will see this year.
Raymond A. Schroth, S.J.

There, men on motorcycles speed it to the hospital where Claire’s body has been sliced open to receive it. Outside the operating room her two sons, exhausted, rest their heads on each other’s shoulder. Again, the theater audience has the disturbing—yet beautiful—bird’s eye view as the gloved hands lower Simon’s gift into the opening.

I am reminded of the great film “Jesus in Montreal,” in which a troop of local actors re-stage a passion play outdoors and in the pageant resemble truths in the lives of the actors. Somehow the crucifixion scene is violently interrupted and the cross topples and the young man playing Jesus is killed. The last scene is a hospital operating room where the actor’s heart has been transplanted to give life to another person. Consistent with the whole film, this is also seen as symbolic of Jesus’ resurrection. Jesus lives on in this person.

There is hardly a religious word in all of “Heal the Living,” but the film doesn’t need them. The images of young men resting on each other’s shoulder, sons protecting their mother and hospital personnel noted for their tenderness also suggest the Biblical references to the “body of Christ.” Katell Quillévéré, the film’s director, has called it “an ode to the living.” She concludes: “A heart stops beating in one body to prolong the life of another...an incredible journey, on which one human being becomes aware that they are a link in a chain, part of a whole. Connected.”

I am glad to be past the age where anyone is likely to want my organs when I die. I know that organ donation saves lives, but there is still a repulsive aspect to people being parted out like an old Ford when they die.

“Healing the Living” offers to readers, certainly to me, a gentle, yet vigorous soul-massage. Its verbal scrapple cuts deeply into my imagination making tangible its spiritual blood flow in sync with the Heart of Jesus to its last beat on the Cross, embodying all who would submit through faith to Jesus’ blood – transplant, transfused with the living character of Redemption. Very appropriate to Easter’s message now being celebrated.

Jesus has said there is no greater love than giving of one’s life so that another may live – it is in effect the highest love, the greatest charity. Is it possible that such a donor would not gain everlasting life? I don’t see how such a gift would not be gloriously acknowledged in the Land Beyond The Stars, by the loving God who provided humanity with the spirit-survival of His Blood-transplant on Calvary!

Also, as I see it, the Blessed Eucharist is another “transplant” example by a Jesus, this time a Jesus Glorified “Body-parts” transplant of His entire Body, Blood, Soul and Divinity, “transplanted” so to speak through Communion, His Body transfusing new life, Divine Life, into our souls, one with the Sacrifice of Calvary touched on above. Absolutely nothing better! I don’t know if there is such a thing as “devotional theology” if so applicable hopefully to what I am trying to say. Let the more scholarly decide.

I wish I were able to offer any useful body part of mine, giving life to another through transplants. But realistically I am much too old and besides useful parts have been damaged by infirmities. I am consoled in knowing that one of our son’s has offered on his Driver’s License any of his useful parts in case of fatal accident. May this happen as God may design, hopefully not through a highway accident, or in some other dreadful way.

Bruce: May I make a suggestion: If your state has a donor designation opportunity, do sign up. You might be surprised what parts of us can be used to save the life, or give a good quality of life to someone. And transplant medicine is improving and growing every year. (And sometimes, parts that cannot be used for transplant might help a researcher improve the medicine involved. My belief is that I have no use for these organs; if they can help someone, then I am for it.
Blessings,
Pr chris

Raymond A. Schroth is books editor at America.