The beliefs changing the world of 'American Gods' 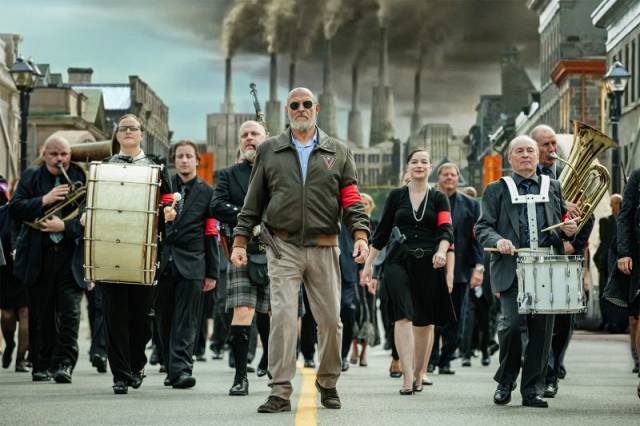 When we throw out the term belief, we often assume everyone is talking about the same thing. One of attractions to a show like “American Gods” is that it purposefully toys with that concept and explores the assumptions that are at work in our lives. While it can be disconcerting, as we see in Episodes 5 and 6, dissecting belief is essential. Our beliefs change us and our world.

Send us your thoughts and reactions either via email or in the comments so we can add them to the conversation. Each week we take a look at a new episode. You can read our take on Episode 2, Episode 3 and Episode 4. You can also read Father Jim McDermott’s take on Episode 1.

Jim McDermott, S.J.: So Shadow is basically us, humanity, in this whole equation. And Odin keeps asking him if he believes because that’s what he needs to survive—he just needs one of us to keep remembering him.

Alex Guyton: Neil Gaiman has been fairly open about originally writing Shadow as a “vessel character”—someone easy to pour ourselves into as readers, to feel as though we’re discovering this weird universe with him. He’s been given a bit more of his own personality in the show than the book. As Jim notes, it’s still easy and seemingly intentional that we can see him as a stand-in for any of us, or humanity as a whole. This is an excellent way to invite viewers to reflect on their own beliefs, just as Shadow does, which I suppose is why we’re all in this chat room together.

Jim: The rules of this world are still somewhat unclear, so I don’t know if this is right, but it seems to me like belief is the energy that fuels the gods’ ability to do anything in the world. But once they have that energy, they can do whatever they want to whoever they want. Eat a hot dog, wipe out an entire police station. Yeesh.

Alex: Yeesh indeed. Also, just because something isn’t born out of “material reality, matter, energy and the laws of physics” doesn’t mean it can’t have a massive effect on objective reality once it has come into being. Ideas, norms and beliefs—humans give them power, then they shape the reality we live in, and then more often than not they end up having power over the humans that created them.

Eric Sundrup, S.J.: The interplay and questions about the power of norms, ideas and beliefs is one of the things that always keeps me watching shows like this. I love exploring the contours of “reality.” Are ideas real? Does it even matter? They change us and they influence us, so is that what marks “reality.” Then you start debating about god: Is god real? Is god an idea? Does that matter?

Alex: I think the notion of ideas shaping reality is the most interesting to me when applied to the new gods, especially Mr. World.

Alex: He’s globalization—what could better threaten the existence of the old gods than the force that homogenizes everything and scrubs out as best it can the differences between cultures and countries?

Eric: And then in Episode 6, we get to see none other than Mexican Jesus (not to be confused with “white, Jesuit-style Jesus” from Episode 3. He certainly provides a contrast to the sacrifices the other gods feed on. Ironically, I caught myself being angry that he didn't smite/block or otherwise destroy the people shooting at the migrants. Part of me wanted him to react like other gods and fight, but then that’s the difference isn’t it.

Jim: It starts with the typical god-stuff, people pray to him and he shows up. And then, as in the end of the episode, we get this war between deities (though we don’t see Vulcan in the opening, each gun is in a sense him). And Jesus loses, gunned down; but then as we pull away we get the wounds, the crown of thorns and finally the Sacred Heart (with halo). Which to me is suggesting unlike other gods, Jesus is “empowered” by his willingness to sacrifice himself.

Alex: The religion of the migrants (one of gratitude, and “more pure” according to the producers’ remarks post-episode) versus the religion of the gunslingers (a worship for self-protection) seemed to mirror Selim and Laura’s discussion in the taxi later on. Selim prayed to give thanks, while Laura only ever prayed to ask for things. I’ll be interested to see if the show is setting up those two schools of belief for a reason or if it was just meant to be something for us to reflect on.

Eric Sundrup, S.J., is an associate editor and director of audience development at America. He is overjoyed that reading and watching “America Gods” now counts as “work.” @sunnydsj

Jim McDermott, S.J., is a screenwriter and the Los Angeles correspondent for America. @PopCulturPriest, tinyletter.com/jimmcd