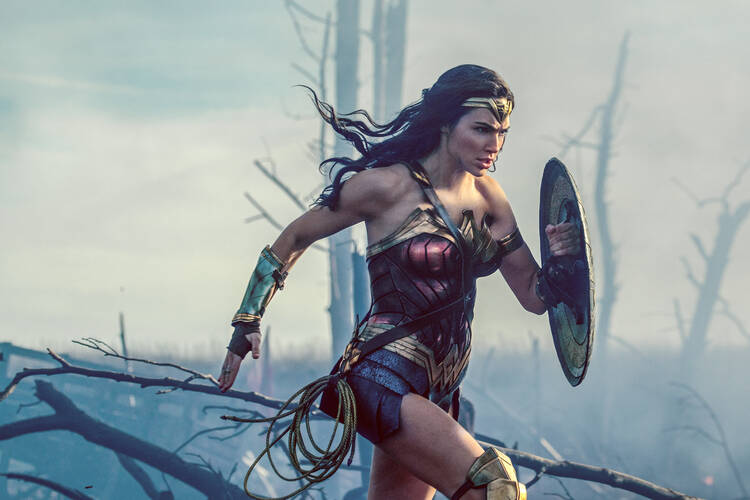 Since 2008, both Marvel and DC Comics have developed intricate cinematic universes built around the Avengers and the Justice League. They have released 19 action-packed films and, until this weekend, not a single one focused on a female superhero. The prevailing reason given is that a female-driven movie could not draw enough of an audience. In a tight 2 hours and 21 minutes and with more than $233 million in earnings worldwide, “Wonder Woman” dismantles the prevailing wisdom and dares you to underestimate her.

There are plenty of examples of mediocre or bad male superhero movies; they are dismissed and everyone moves onto the next movie. If “Wonder Woman” had been panned, it would have been used as proof positive that female superhero movies are a bad investment. The pressure is immense, and there is no room for error. A by-product is that women are held to a higher standard.

In Sunday’s women-only showing at Brooklyn’s Alamo Drafthouse, I watched with fascination as we were transported to Themyscira, the land of the Amazons. These women exude strength. They do not need men to protect them, and when their island is attacked by German soldiers from World War I, they band together to defend their home. When Diana Prince (Wonder Woman) sets off on her mission to kill Ares, the God of War, who she believes to be behind the Great War, she enters the world of humankind and finds it dominated by men. You feel Diana’s discomfort and confusion as she sets foot in London, where she is expected to be quiet and stand in the corner. She does not care that she does not belong in a London war room; she will not be silenced—and happens to be the only one in the room capable of reading the German code book.

Some critics have lamented the lack of supporting female characters once Diana leaves Themyscira, but I think director Patty Jenkins captures something true and infuriating about women who inhabit male spaces—the stakes are high, and you are often alone. Walking into male space, alone and vulnerable, can be terrifying. When a naïve Diana enters the British war room, all the men are shocked a woman has broached their arena. Diana does not know she does not belong, and she does not care. This scene is one of many that seem quaint but, in reality, provide much inspiration women and girls still need in 2017.

I am a theologian who knows well the experience of being the only woman at the table. “Wonder Woman” beautifully captures the intensity and frustration of this experience, as well as the feeling of greater responsibility for those not allowed in the room.

There is an almost knee-jerk reaction when women enter into supposed male spaces. The backlash on Twitter of men outraged by Alamo Drafthouse’s women-only showing is one example. The reaction to “Fearless Girl,” the sculpture of a young girl facing down Wall Street’s “Charging Bull”is another. Just this May, in order to defend the integrity of the bull, another artist installed a statue of a dog urinating on “Fearless Girl.” What is at stake here is the right to define the space.

Cultural fights about female sexuality, women’s rights and domestic ideals have often been waged on the pages of her comic.

In the Gospels, one of Jesus’ most radical choices is his use of women as witnesses. From Mary Magdalene to the Samaritan Woman at the Well, Jesus trusts women to tell his story. In fact, if it were not for female witnesses, preserving an account of the crucifixion and resurrection would have been quite difficult as it was the women who did not flee. Unfortunately, women’s space in the Gospel narratives has not been celebrated for much of Christian history. The most blatant distortion is the maligning of Mary Magdalene as a repentant prostitute, a claim with no grounding in Scripture. Her strength and witness in otherwise male cultural and religious spaces were less threatening if she could be reduced to a female stereotype.

Over the last 75 years, there have been many attempts to weaken or diminish Wonder Woman. In the 1940s, she was reduced to the position of secretary of the “Justice Society.” Last year, the United Nations enlisted Wonder Woman as a special ambassador for empowering girls but dropped the campaign after critics objected to the use of an “overtly sexualized” character as a role model for girls.

Ignore the critics. The spiritual journey of 'Iron Fist' makes it worth watching.
Jim McDermott

Cultural fights about female sexuality, women’s rights and domestic ideals have often been waged on the pages of her comic. Yet Wonder Woman has persisted. Comic cinema may be a fundamentally male space, but Wonder Woman was rated “the most powerful superhero” by Entertainment Weeekly. For me, the heart of the reason why is not her superhuman strength and bulletproof cuffs but her commitment to truth and justice. Winning is not her goal; peace is. She is a warrior seeking to end war itself.

In many ways, it felt as if the hopes and frustrations of an entire gender rested upon Wonder Woman’s shoulders this weekend. It is an impossible standard for any individual movie or woman to live up to. Gal Gadot’s portrayal of Diana captures this vulnerability and frustration. She is motivated by a deep desire for justice, love and peace. She wants to kill Ares to rid the world of conflict. Ultimately, she realizes that she cannot achieve that goal. The path laid out for her was not possible, and instead, she finds hope and beauty in humanity despite the darkness that looms beneath. Real strength is ultimately not power over others but power in the service of love and justice. She cannot rid the world of all conflict, but she continues to fight for those who cannot fight for themselves.

Meghan J. Clark is assistant professor of moral theology at St. John’s University in New York. She is author of The Vision of Catholic Social Thought: The Virtue of Solidarity and Praxis of Human Rights (Fortress, 2014). She is a member of America’s board.

I find it concerning that this reviewer does not treat the story more seriously as a forum for ideas and the film's main vehicle for (its own vision of) truth. While it should always be lauded when mainstream films place female characters front and center, and I applaud the film's ability to invite us into the difficult (and all-too-familiar) waters of female disempowerment in male spaces, the story's flaws are too great for me to regard this film as little more than schlocky Hollywood pandering.

When we see Wonder Woman don her armor and leave Themyscira, we can't wait to watch her claim the mantle of "most capable Amazon badass" from Robin Wright's Antiope. This obviously means lots of breathtaking hand-to-hand combat and an ever-increasing body count. While this is hardly new for the DC cinematic universe (see Batman v. Superman for a bewildering loss of life) this violence culminates in the final confrontation between Diana and Aries. Before destroying her half-brother and restoring peace to the world rent by war, she tells him powerfully that "Love is stronger than hate," before blowing him to smithereens. Of course there is a sort of primal satisfaction in seeing the bad guy destroyed, but let's linger on that message for a second. True, the words "Love is stronger than hate" are true in the purest sense of Christian simplicity; they summarize Jesus' message and form the basic architecture of the emerging Kingdom of God. Yet in Wonder Woman we see this message appropriated into a scenario that plays into our less-than-noble notions of retributive justice. Walter Wink wrote extensively on the "Myth of Redemptive Violence" that plagues Western storytelling. It sustains our cinema today and can account for the violent and overwhelming pushback my own people have received for hundreds of years at the hands of this nation's government (speaking as an Indigenous person). It also makes us cheer when we see Aries dissipated into nothing. There is nothing of the radical choice George Lucas made in 1981 when he allowed his hero Luke Skywalker to fulfill his Jedi mission not by destroying his Sith enemy, but by allowing Darth Vader to be redeemed by self-abnegating love. We see more and more dead Germans pile up, alongside Turks (and other baddies) and we cheer, as we have done throughout time.

Yet a lingering sense of disquiet within me calls me to reexamine the historical context of Wonder Woman's story. I give mainstream Hollywood credit for including the horror of World War I, with its barbed wire, chemical weapons, and moonscape battlefields the backdrop for much of the action. Yet any casual student of history will remember that the First World War was anything but redemptive: it was a slaughterhouse on a global scale that swallowed a generation, millions of men, women, and children silenced and a continent crippled. The victory at the end of the film rings ironically hollow when we remember the effects of the Armistice: 1919's Treaty of Versailles, which laid the economic groundwork for the failed Weimar Republic and the rise of an even more sinister and devastating threat to the world. Sure, Wonder Woman blew up her half-brother and ended the war. Are we thus supposed to forget the concentration camps, the death marches, the human wave attacks, and the nuclear terrors that followed?

For the record, I found Guardians of the Galaxy 2 a far more redemptive, humanistic, and ultimately "Christian" movie in that it allows us to inhabit a space of incorporating our allegiance to Jesus far more than in Wonder Woman. Plus, the entertainment is driven by likable characters, not whiz-bang story. But I digress. I can comment on that film another time.

I am so glad to see a female-led superhero movie do well. I will put this on my list of films to see. Women have definitely struggled to have a voice and to be respected as leaders. I'm actually producing an almost all-female superhero comedy feature and we are trying to get funding right now. The film is called The Go-Girls and we have an IndieGoGo campaign going on right now at: https://igg.me/at/gogirlsfilm (If it's alright for me to share this.)