What '13 Reasons Why' gets wrong about suicide 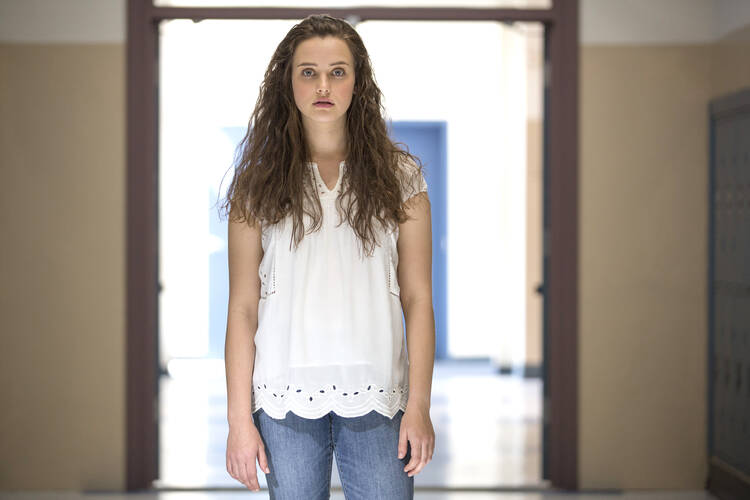 If it takes a village to raise a child then it takes one to kill a teenager, as well, or at least that is the premise of Netflix’s provocative new series, “13 Reasons Why,” based on Jay Asher’s 2007 book of the same name. The show depicts the series of events that led to the suicide of high school student Hannah Baker (Katherine Langford). Each of the 13 episodes follows Hannah’s classmate Clay Jensen (Dylan Minnette) as he attempts to understand Hannah’s death while listening to the tapes she narrated telling the stories of the 13 people she believes are responsible for her death. This is not TV viewing for the faint of heart or any other parts of the soul for that matter.

This is not TV viewing for the faint of heart or any other parts of the soul for that matter.

“13 Reasons” has created a storm of controversy and incited outrage from numerous sides, including members of the Catholic community who claim that the series romanticizes suicide and does nothing to show the role mental illness plays when a person takes his or her own life. Quang Tran, a Jesuit priest with a background in suicide prevention counselling, says that though the show ‘’has good intentions, teenagers who are at risk should not watch without care and support, as it could be triggering.’’ Father Tran also finds the show’s use of Hannah’s posthumous narration as not giving adolescent viewers the proper perspective on the finality of suicide. ‘’The permanence of death must be emphasized for children who developmentally do not understand death,’’ Father Tran says. ‘’Even teens with a better understanding may not have the maturity to accept the reality of death’s effects.’’

What is intriguing is that while the series has created much hoopla since its release on March 31, the book, which was published for the young adult market a decade ago, never raised an eyebrow. To be fair, the subject matter is much more common in the young adult book market, and so does not stand out nearly as much. But it also speaks to the reality of Netflix’s pervasiveness and a viewer’s ability to binge an entire series in under 24 hours, leading to an amplification of intensity in a culture with an already voracious appetite for consuming all forms of media all the time.

"13 reasons" is an indictment of contemporary society and the values we hold.

But “13 Reasons” should not be consumed mindlessly; it is an indictment of contemporary society and the values we hold. The world of the fictional Liberty High and its privileging of white men and objectifying and marginalizing of women is a microcosm of the world in which we live. If nothing else, the series serves as an excellent catalyst for conversation; and indeed, that is how this show should be watched—especially by adolescents—in dialogue with others.

The primary problem with the show is in its solution. Suicide serves as vindication for Hannah, the last word of a young woman simmering with deep seated (and justifiable) rage. Hannah begins and ends angry and alone, and while the 13 people she implicates have the opportunity to start over again, she does not. Suicide is not the answer, and “13 Reasons”is ambiguous at best at relaying that message.

What may be the series’ biggest strength is also its biggest problem. The show does an excellent job of showing how the community failed, not just Hannah, but several of her peers. In the world of “13 Reasons,” as is often the case in the real world, women are violated, silenced and ignored. However, in tackling the very relevant topics of bullying, rape and substance abuse, it also raises the question of just how much culpability does a community have in a suicide.

The show is very clear in its vision that others were responsible for Hannah’s death, but that view does not seem to be in sync with a subject as complex as suicide. Certainly, the community has a role to play, but this seems to discount volition and free will entirely, which is particularly important in a scenario such as Hannah’s, where there seems to be absolutely no evidence of mental illness. The series attempts to make a very cut and dried case out of a situation that can never be cut and dried, and in doing so, takes away all culpability from the one person who could have prevented it from happening. Ultimately, the answers that “13 Reasons” provides are not answers at all and leave the audience with nothing but confusion and despair.

I am glad to read this. I started watching this series on the recommendation of a friend, but never got more than 3 or 4 episodes into it. It seemed that Hannah had made a sort of puzzle / joke out of her death (and life), leaving her friends and community in confusion that they had no way of working through. The underlying premise being that life is trivial and can be tossed at one's whim.

Reminds me somewhat of the suicide of the woman with terminal brain cancer. When things get rough, just pull the plug. There is no indication that these people have even a hint of the mysterious gift & promise that their lives hold for others. Or the trust that they will be carried.

I wonder if this series could be used as a teaching tool for Catholic h.s. ethics courses?

There is an article in the NY Times today about the series. Seems that it is a trigger to teens who are at risk for suicide, not unlike the "copycat" syndrome that happens when one person commits suicide, others follow.

Here is the link to the NYT article: https://www.nytimes.com/2017/05/01/well/family/for-families-of-teens-at-suicide-risk-13-reasons-triggers-concerns.html?hp&action=click&pgtype=Homepage&clickSource=story-heading&module=second-column-region&region=top-news&WT.nav=top-news

Thanks--this is a timely article. It seems that this series is NOT a teaching tool for h.s. school students!