‘Only God can make a tree’: The Catholic behind the famous Arbor Day poem 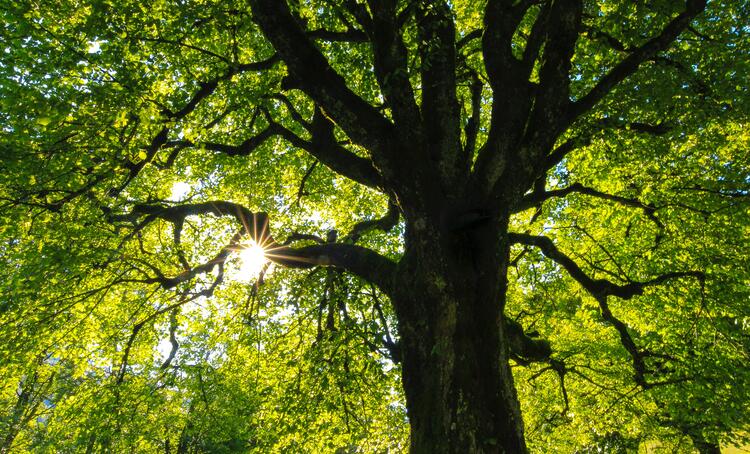 Photo by Jan Huber on Unsplash

It might interest you to know that at least three of the 12 people who have rest areas named after them on the New Jersey Turnpike have some historical association with this magazine. The Vince Lombardi rest area, near Exit 18, is named for the Jesuit-educated Hall of Fame football coach, who, among his many other accomplishments, was a lifelong subscriber to America. The rest stop near Exit 7 memorializes our 28th president, Woodrow Wilson, who played a major role in a minor diplomatic kerfuffle that got America briefly banned in Ireland. And the stop between Exit 8 and Exit 9 is named for Joyce Kilmer, a poet and essayist whose byline appeared in these pages six times in 1915 and 1916.

Most folks won’t recognize Joyce Kilmer by name, but his most famous poem may ring a bell. Many sixth-graders still memorize its 12 simple lines, just as I did, words that will no doubt be heard again at thousands of modest ceremonies this Arbor Day (Don’t bother Siri: Arbor Day is April 28). The poem is titled “Trees.”

I think that I shall never see
A poem lovely as a tree.
A tree whose hungry mouth is prest
Against the earth’s sweet flowing breast;
A tree that looks at God all day,
And lifts her leafy arms to pray;
A tree that may in Summer wear
A nest of robins in her hair;
Upon whose bosom snow has lain;
Who intimately lives with rain.
Poems are made by fools like me,
But only God can make a tree.

I confess that I like the poem. I say “confess” because it’s supposed to be embarrassing that I do. Most modern critics consider Kilmer’s work naïve and saccharin; fine for grade schoolers, but not the sort of thing Serious People read, let alone recite. Not just modern critics either: Ogden Nash, the mid-20th-century master of light verse, once famously parodied “Trees” with a similarly-structured homage to billboards.

Yet John W. Donohue, S.J., wrote in this space in 1993, that while “even mild academic critics turn into werewolves when they consider the popularity of ‘Trees,’ which Kilmer wrote when he was 23, it is quite possibly the best-known American poem of this century.” “Trees” is worth remembering, then, if only because it’s a significant pop cultural artifact. But there are other, less familiar, more important reasons to remember the poem, as well as the poet. For one thing, this manifestly theistic work is that of a former atheist whose Christian faith and literary vocation were forged in the crucible of his daughter’s losing battle with polio. "If what I now write is considered poetry,” he said, “then I became a poet in November 1913,” which just happened to be the month and year in which Kilmer became a Catholic.

For one thing, this manifestly theistic work is that of a former atheist whose Christian faith and literary vocation were forged in the crucible of his daughter’s losing battle with polio.

The faith that had rescued him from his despair also led Kilmer to enlist in the army just a few weeks after the United States entered World War I. One hundred years ago this spring, Kilmer wrote his last words for America, traded in his pen for an M1903 Springfield repeating rifle and sailed for France with New York’s Fighting 59th. As important as his faith had been to him at home, he wrote in a letter to his wife, “I think since I have been in France it has done more for me. It has carried me through experiences I could not otherwise have endured. I do not mean it has kept me from fear—for I have no fear of death or wounding whatever. I mean that it has helped me endure great and continual hardships…. I cannot forget what made me live through them and bear myself like a man.”

An eyewitness report from the Second Battle of the Marne, reprinted in America in 1918, says this: “The battalion advanced into the woods to clear the spot of the enemy. In the course of this advance, I suddenly caught sight of Kilmer, lying on his stomach on a bit of sloping ground, his eyes just peering over the top of what appeared to be a natural trench. We called to him, but received no answer. Then I ran up and turned him on his back, only to find that he was dead with a bullet through his brain.”

We should remember Joyce Kilmer not just on Arbor Day, but on Memorial Day as well. And if one day your child comes home from school, eager to recite the few lines of Kilmer’s she learned that day, be sure to tell her the rest of the story; how this simple, faithful poet gave his life for God and country, in a country not his own, beneath trees that only God had made.

One day on my way home from work I stopped at the store to pickup a few things. As I got out of my car I thought,"I'm unwinding like an old man." My second thought was, "I'm old enough to qualify for Medicare, I an call myself old."

That was a few years ago, and I call myself old, which is probably why I recognized the name of Joyce Kilmer.

Yes, the poem is truly for children and those looking for something simple to contemplate, is that a bad thing?

A fellow who claimed some literary background, a master's in literature I believe it was, once told me T.S. Eliot's poem, "The Waste Land" is considered by many scholars to be the best poem in the English language." Then he said you have to have the author's notes beside you to truly understand it.

My response, any poem that requires anything else to understand it is not worth reading.

By my standards that makes "Trees" better than "The Waste Land", and thus better that what many consider the greatest poem in the English Language.

Oh forget the critics, you are the critic who matters.

Also, it was the Fighting 69th. I'm going to look up the movie with James Cagney on Ebay. Probably there.

I remember reading this poem when I was very young and I like it, too. It may not possess the intricacies of "The Rime of the Ancient Mariner" or "Hamlet," but it appeals, without pretense, to the heart.

“A Tree grows on the Marne,” America magazine, Of Many Things, 1 May, 2017. The Battle of Marne was where Joyce Kilmer shed his blood to water the trees in a war that took the lives of hundreds of thousands of Europeans and tens of thousands of Americans, except that of Ben Salmon of Denver who wrote President Wilson: “I refuse to submit to conscription. Regardless of nationality, all men are my brothers…The commandment ‘Thou shall not kill’ is unconditional and inexorable.” ( Found at: www.bensalmon.org). For his refusal he was still forceably inducted, condemned to death, later commuted to 25 years in prison, and later sent to an insane asylum since the U.S. Army considered him such. During his time under observation he wrote some 230 pages of an apologia pro vita mea which convinced the hospital’s psychiatrists that he was indeed a very sane follower of Jesus. Would that Joyce Kilmer had talked things over with Ben Salmon rather than contribute to the tragedy of World War I which set the stage for the many wars the U.S. has fought in the 100 years since then. A yet greater tragedy is the willingness of the U.S. Church to preach that WWI and most wars since have been justified. May the message Pope Francis will give by his visit to Bozzolo and Barbiana, Italy on June 20, 2017 be an opportunity for a conversion of the U.S. Catholic hierarchy and Faithful. It’s time to beatify American Catholic Ben Salmon as Pope Francis honors two Italian conscientious objectors to war.
Fr. Bernard Survil, Ph: 724-523-0291, survil@uscatholicpriests.org 29 April, 2017

I like Trees. Back in the early 80s in Kingsbridge, Bronx, NY where I lived with my wife and children, I saw a tree on Corlear Avenue that looked sick. It was a very large Sycamore with a massive trunk growing on a sidewalk where it had been planted before there was a sidewalk, at least one hundred fifty years earlier. I got the age of the tree which I called “Sister Tree,” or more officially the “Corlear Sycamore,” from the Bronx Historian, who identified that tree from recorded informational evidence. The tree is now at least one hundred eighty years old, with an Apartment Complex built around it and named for it.

As I said the tree looked sick and I decided to do something to improve its health, so I wrote a letter to the editor of “The Riverdale Press,” a Pulitzer Prize newspaper and to make a long story short, a “Save The Tree” neighborhood campaign developed. With help from the Editor of The Riverdale Press, also the Chamber of Commerce, the New York City Parks Department, other political, municipal and local religious leaders too. Schools got involved and money was raised to repair the sidewalk, fence-in the Tree and mount a plaque commemorating “Sister Tree.” From the Parks Department it was discovered that the Tree was Aphid infected and appropriate treatment was given assuring its health and further longevity.

On a given day the neighborhood gathered celebrating the saving of one of NYC’s oldest trees. Religious leaders blessed the Tree, Mayor Koch of NYC came and addressed the venture calling it a sign of environmental sensitivity saying, the neighborhood heard cry of the Tree for help and responded. Channel Seven TV also came and in the evening news that day all of New York shared the news of a Tree saved.

Now My wife and I live in Southeast Costal Georgia and trees abound! Some are very old and gnarled bending as if in sorrow, or adoration of God. Others have branches like arms stretched upward as if pleading for some favor and others dance merrily in the breeze and watching them I want to dance too! There’s a tree in Savannah, two trees really planted so close together that now with massive trunks both hug each other in a lifelong friendship. And there is so much more! Yes, no doubt about it, as Joyce Kilmer said, “Only God can make a Tree!” Thank God for trees, they are as nothing else in nature is, SALVIFIC!