Jesus left us, and so did Richard Simmons. We’d better get used to it. 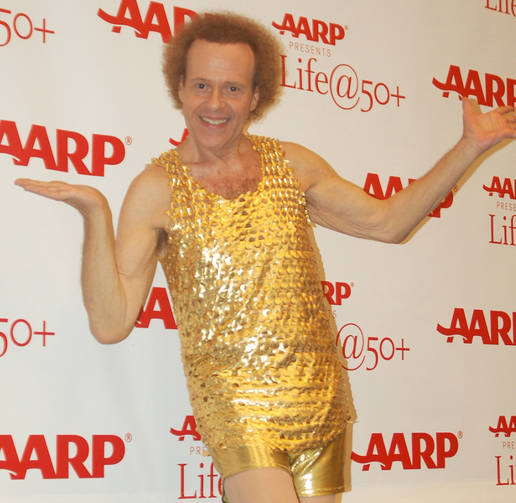 I firmly believe a major story has been cut out of the Gospels—a tale so fundamental that its absence should make us question the veracity of the Bible text.

It is the moment immediately after Jesus announces he is ascending into heaven. If you look in the Gospels, announcement and ascension are pretty close to the same thing. He says he’s going, gives a few parting thoughts, and up, up and away.

There is absolutely no way it went down like that. I don’t care how much Jesus’ resurrection might have changed the disciples’ points of view, having only just been through his death there is no way they would have just accepted that Jesus was taking off again—this time for good.

And, when you think about it, why did he have to go when he did? It’s not like there wasn’t someone minding the store upstairs or something more obviously pressing he had to do. He came for us; we were still here, still in need, and in need in ways that could be enormously improved by his continued presence. Given those circumstances, how could he not stay?

Yes, there was definitely some animated conversation that followed Jesus’ announcement. I’m going to say a few voices were raised, a few tears were shed. And at some point, someone (ahem, Peter) almost certainly grabbed Jesus’ knees and refused to let go.

Easter is not for a few weeks yet, and the Feast of the Ascension is even further away, but listening over the last month to the popular “Missing Richard Simmons” podcast, it has been hard not to think about that untold awkward and uncomfortable moment in the life of Jesus and his disciples.

Launching a public investigation via a national podcast might seem a strange way to check in on a friend.

“Simmons” presents itself as a sort of celebrity version of the hit investigative podcast, “Serial.” In 2014, the hyper-extroverted fitness guru Richard Simmons suddenly withdrew from the world. He stopped teaching fitness classes, stopped coming out to say to hello to all the tour buses, stopped answering phone calls or emails—even from people who had known him for decades. Dan Taberski, a former producer at “The Daily Show,” had been a student in Simmons’s weekly “Slimmins” exercise classes. Concerned for his “friend,” he sets out in the podcast to discover what had happened and whether Simmons is okay.

Now, launching a public investigation via a national podcast might seem a strange way to check in on a friend. But at first, Taberski seems to be coming from a good place. We learn about Simmons’s past, how he had considered becoming a priest and how he saw his fitness work as a ministry. Taberski speaks with many people whose lives were changed by Simmons, many of whom share the host’s concerns for his wellbeing. Various theories are proposed and investigated: Simmons is depressed, perhaps from the death of a pet or perhaps as part of longer-term psychological issues; Simmons is transitioning from male to female; Simmons is being held hostage by his maid, Teresa.

But the longer Taberski goes on, the clearer it becomes that there is far more on the line for Taberski himself than he admits. At odd moments you hear it: a sudden note of heartbreak or desperation in his voice as he wonders once again why Simmons has disappeared. But he can’t seem to acknowledge this sorrow. He is told repeatedly by the few people still in contact with Simmons that Simmons is fine, he just no longer wants to do what he was doing. Still, Taberski can’t let go. There has to be something more, he argues. You don’t just do that to your friends (a.k.a., me).

Facing one’s clinginess, having to let go—it’s the last lesson, the real revelation of the ascension.

It might seem strange to compare the sudden reclusiveness of a hyperactive fitness guru with the ascension of our Lord and Savior. But listening to Taberski I can’t help but think this is what any actual ascension must have been like: people despite all their best instincts not being able to let go—“We just need a little more time!” “I still have so many questions!” “I want you to stay with me forever!” (Peter, you must chill)—and Jesus finally having to cut it off. “I was here to get you started. You have all that you need within you. Now grow up and get to it.” Facing one’s clinginess, having to let go—it’s the last lesson, the real revelation of the ascension.

In this week’s finale, Simmons’s longtime manager, Michael Catalano, finally agrees to talk to Taberski. Taberski wonders whether Simmons has been listening. Catalano says he has heard pieces and is aware of the coverage.

“Do you understand why Richard is so important to me?” Taberski asks, then rushes to add, “And the people that love him?” He also notes that he feels better, having heard now from police and others that Simmons really is okay.

Catalano thinks on this. “I can’t say that Richard feels better as a result of the podcast,” he offers. “I think you’ve really created more worry and speculation.”

Bank Heists and Wiseguys: "Crimetown" is the next true-crime podcast you should listen to
Kerry Weber

A long pause, as Taberski takes this in. And in the silence you wonder if maybe, finally, the semi-creepy stalkery quality of his pursuit, which somanycommentators have criticized, is hitting him. Maybe he is realizing that no matter how warm and affirming and ever-available Simmons had once been, he also had every right to walk away when he felt it was time—and not only that but to expect that Taberski and all of the people Simmons affected should be able to step up and do as he did themselves.

Over the six episodes of this podcast, Taberski has been pushed to this point many times and turned away. Maybe it’s finally sinking in. Maybe this is his moment of revelation.

Finally, he speaks....and offers more self-justification: “I would say he left in a concerning way and that people were worried about him. And a lot of those friendships that might have meant something for him, they just ended. Can you understand their point of view?”

Ah, well. If the Gospel writers had been straight with us, we would know the disciples didn’t handle it well either.

Thanks. But no, nothing is missing in the Gospels. Jesus already had a long, sad farewell discourse with the disciples at the last supper. No use going thru the heartache again. But he did the next best thing: departing spectacularly. It was sad, yes, and angels had to shake them out of their "clinginness". But how about Jesus? He ascended looking toward Bethany (house of friends in Hebrew). Martha & Mary & Lazarus's house was very, very big (remember when Martha complained about Mary leaving all the hospitality chores to her?) But it wasn't nearly as big as the temple, for example. Yet the last thing Jesus saw was his friends ' house. Maybe that's what is missing in the Gospels, how the Father had to snap him out of it. Oh Father, please, please, please send him back soon!

The world is falling apart and Jim McDermott is worried about Richard Simmons. Wonder why the world is a mess. This says it all.

Christ gave us the Church and the Eucharist and the Holy Spirit oversaw it all. That should be more than enough. But apparently not for those interested in Richard Simmons.