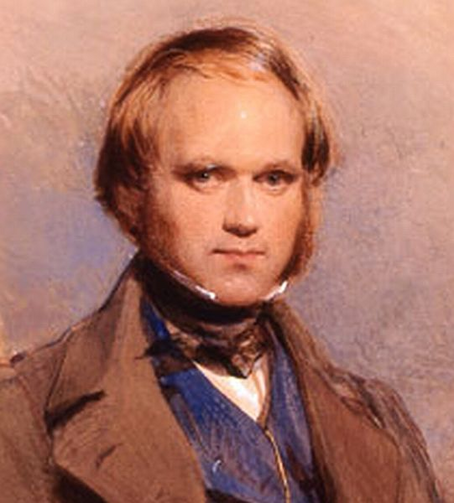 A portrait of 31-year-old Charles Darwin by George Richmond in 1840. (Wikimedia Commons)

Every age,” Ilia Delio, O.S.F., writes,“must discover Christ anew.” In her latest book, Christ in Evolution, she suggests how we might proceed on the road that leads to just that discovery in our own time. Scientific theories, especially the theory of evolution, often pose difficult challenges for Christian believers. With so much new information about the structure of matter and the mechanisms by which the cosmos has evolved, science can now tell the fascinating story of how we emerged from stardust to life to thought. The story’s apparent coherence sometimes leaves believers wondering how God, much less the person of Jesus Christ, fits into this picture. Some have asked: Is the Christ of the Gospels large enough to encompass this kind of universe? And if so, how do we understand the mystery that is Christ in a multireligious world? Grounded in the tradition of St. Bonaventure, who already in the 13th century portrayed the Incarnation as dynamic and closely connected with creation, and in the company of several contemporary mystics and theologians, Delio takes on these important challenges.

Delio, who is professor and chair of spirituality studies at Washington Theological Union, sets the stage for this task with a brief portrayal of the evolutionary picture of the cosmos and with a short history of Christology. Although most Christians consider doctrine regarding Christ as fixed, in fact our understanding of the meaning of Christ has not been static. It has developed significantly over the years, enriched by the questions of each age and often influenced by forces from outside the church. The mystical tradition has also had a role in developing Christology, tending to interpret Christ’s role in the world in a more dynamic way than the traditional systematic theology has done.

Delio compares our present age to the first axial age, that period between 800 and 200 B.C. during which humanity experienced a radical shift in consciousness and, at the same time, established the foundations of the great religions. She claims that we are in the midst of another critical period in history, a second axial age, when humanity must take another major step, one that again requires a more complex religious consciousness. Key to this forward movement, according to Delio, is an understanding of the person of Christ and Christ’s action in today’s world that is capable of transcending cultural differences.

But the intellectual, abstract and privatized approach of Western Christology makes this difficult. Because of it, Delio insists, the theologian who wishes to achieve a deeper understanding of the person of Christ must be first and foremost a contemplative. Only a mystical mind, she says, will be able to break through to the core of the mystery of Christ, to experience the one who transcends the historical Jesus of the Gospels. Only by immersion in the paschal mystery can we experience the fullness of Christ.

Many present-day mystics are pointing the way to this more vibrant and relevant Christology. Instead of opting for a “post-Christian” stance or a superficial religious syncretism that blurs the distinctions between religions, they are broadening our understanding of Christ in new and interesting ways. Delio chooses four dialogue partners to illustrate her point: Pierre Teilhard de Chardin, Raimon Panikkar, Thomas Merton and Bede Griffiths.

Each of these contemporary mystics reveals something of the cosmic and trans-cultural nature of Christ. For Teilhard, Christ is the unifying principle of the universe, the one who draws all things together into himself and gives meaning and direction to the cosmos. He is the form of the universe, the force of love bursting into the cosmic milieu to set it on fire. For Panikkar, Christ is the central symbol of all reality, the one whose power is discovered by experiencing the deep inner center of each human person. Panikkar rejects a one-size-fits-all Christology, encouraging instead diversity in our ways of understanding Christ. Merton focuses on the transcultural nature of Christ, who is incarnate in each person and who, in hisresurrection, has become the finally integrated person. Finally, Griffiths views the Christ event in the context of our present understanding of a larger dynamic and interrelated world and experiences Christ as the self of redeemed humankind.

Each mystic also names the implications of such a Christology. Teilhard asserts that as co-creators we are responsible for participating in the ongoing evolution of humanity. Confronting the problem of religious pluralism, Panikkar promotes open conversation with those who think differently. Instead of discussions about doctrine, though, he recommends an exchange of religious experience as more fruitful. Merton encourages a trans-cultural consciousness that, once having discovered the “true self,” is capable of entering into solidarity with the one perceived as other. Griffiths calls for interreligious dialogue, which he considers a form of mystical experience, and challenges us to rediscover the power of the feminine, that unconscious intuitive dimension of the self that is nurtured by contemplation. All emphasize as essential participation in the mystery of Christ.

Delio also explores what recent developments in artificial intelligence might be saying about us as humans and about our participation in the Christian mystery. A two-edged sword, technology arises out of the very freedom of imagination that allows us to transcend ourselves and to evolve, yet it also bolsters the individualism so prevalent in today’s world. There are plenty of areas for theologizing here: reconsidering the meaning of the death and resurrection of Jesus in light of technology’s striving for immortality, and rethinking the meaning for today of the human as imago Dei, to mention only two. The search for self-conscious life on other planets throughout the universe also provokes us to question the form that incarnation might take in these places if, in truth, there is life in other parts of the universe. Perhaps, as Teilhard once suggested, the human Christ might be simply one “face” of the cosmic Christ.

Delio’s approach to Christology is refreshing and optimistic. With Karl Rahner, she not only believes that Christology must “make sense on the basis of our experience of ourselves and of our world,” but also demonstrates how this might be achieved. In Christ in Evolution, she weaves together the Christological threads that present-day mystics are spinning with those of the tradition in a way that is accessible to the nontheologian, challenging to the biblical literalist and encouraging for all those who wish to participate in the reintegration of the Christ figure into a relevant cosmological vision.

This article also appeared in print, under the headline “Darwin's Gift to Christology,” in the October 13, 2008, issue.