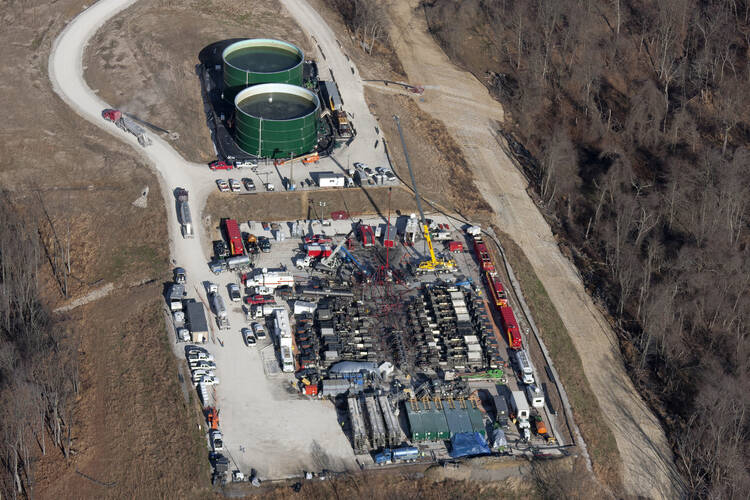 A fracking gas well in the Marcellus Shale formation, which is primarily in New York, Ohio, Pennsylvania and West Virginia and is the largest source of natural gas in the United States. (iStock/6381380)

As an island nation, Ireland gives special significance to water. Folklore tells of swans transformed from humans, bound to lakes for centuries. No town is more than three hours from a coastline where one is drawn to the sea with its “timeless waves, bright, sifting, broken glass,” to quote the poet Seamus Heaney. Water is often the preamble to conversations among both friends and strangers, as the frequency of rain is lamented or inquiries are made of the next forecasted shower.

Given our respect for water resources, it came as something of a surprise when the Irish government—which declared a climate emergency last May—added a liquefied natural gas (L.N.G.) terminal to the European Union’s list of Projects of Common Interest. The terminal is to be built on an estuary of the island’s longest river, the Shannon, a Special Area of Conservation, but the project is on hold awaiting the outcome of a court case over planning and environmental concerns. Planning permission, which was granted in 2008, has expired and critics of this project want the environmental assessments re-examined. The project’s U.S. backers, New Fortress Energy, report the terminal will have the capacity to import from the United States more than six million gallons of “fracked” L.N.G. each day, which is equivalent to the amount of gas currently imported annually.

How do we make sense of a country that protects its water supply by banning fracking within its own borders but is willing to contaminate waters in another country?

Climate activist groups, aided by several high-profile anti-fracking campaigners, including Mark Ruffalo and Cher, have pleaded for the Irish government to reconsider including this project on the P.C.I. list. Many have accused the Irish government of hypocrisy on the subject of fracked gas, a process it outlawed domestically in 2017. The process of fracturing rock to capture gas can lead to the escape of methane, a potent greenhouse gas, and contamination of the atmosphere, groundwater and soil. One scientist who opposes the Shannon River facility says that the carbon footprint of imported L.N.G. is 44 percent higher than that of coal. Fracking also raises concerns about significant health risks, and activists in Pennsylvania are demanding an investigation into high numbers of childhood and young adult cancer cases near shale gas operations.

The opposition to the Shannon L.N.G. facility is grounded in a realization that local actions have global implications. Fossil fuel emissions do not respect national borders. And the fracking for the L.N.G. imported by Ireland will primarily take place in Pennsylvania, further increasing the risk of poisoning aquifers and water tables for low-income communities in that state.

How do we make sense of a country that protects its water supply by banning fracking within its own borders but is willing to contaminate waters in another country? Perhaps considering water as a common good, one not constrained by the boundaries of nation-states, provides a path to enlightenment.

Descriptions of water bookend the Bible. In the Creation story (Gn 2:13), “a river flows out of Eden to water the garden.” In his final description of a holy city within a new heaven and a new earth (Rv 22:1), John tells of “the river of the water of life, bright as crystal, flowing from the throne of God.” Water is central to life-sustaining acts of God, like parting the Red Sea in Exodus 14, providing water to drink from the rock at Massah and Meribah (Ex 17:1-7) and serving as the medium for baptism (Rom 6:1-14).

Water, which is necessary to sustain life, must be understood as fundamental to any concept of the common good. In 2003, the Pontifical Council for Justice and Peace declared that “water is a good that must serve for the development of the whole person and of every person.” Central to this is the idea of a good being available to every person. For the Irish government to continue with the L.N.G. terminal on the basis of energy security for Irish people is to disregard the harm caused to people in Pennsylvania.

Climate and ecosystem breakdown presses us to consider again how decisions made locally make a difference globally.

Defending his position during a parliamentary debate, the minister for climate action, Richard Bruton, argued that “we cannot, as a country, pick and choose which products we take based on their environmental profile.” His department later stated that the Shannon L.N.G. terminal is a private commercial project, and the responsibility for future investment and the operational decisions would be “matters for the project promoter.”

This represents the capitulation of a senior government minister to the forces of the market, where potential profit seems to predetermine the outcome. But in the encyclical “Pacem in Terris,” Pope John XXIII, describing mutual collaboration between states, differentiates between the common good of the nation-state and the common good of the entire human family:

This is the crux of the issue: Relationships between states must be characterized by the principles of truth and justice. The Irish government’s insistence on importing fracked gas reveals the dark heart of neoliberalism, where democratically elected politicians are unable to refuse the provision of new markets for goods that have deleterious effects on the communities where the goods are extracted. In an age of increased populist nationalism, climate and ecosystem breakdown presses us to consider again how decisions made locally make a difference globally. The Catholic Church, in its insistence that water is a common good, is invoking a universal moral principle of profound political significance that hints at how we can engage this global issue from our local perspectives. 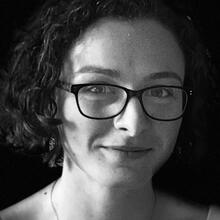 Ciara Murphy is the environmental policy advocate in the Jesuit Center for Faith and Justice in Dublin, Ireland.