Pope Francis to meet Putin for third time in July 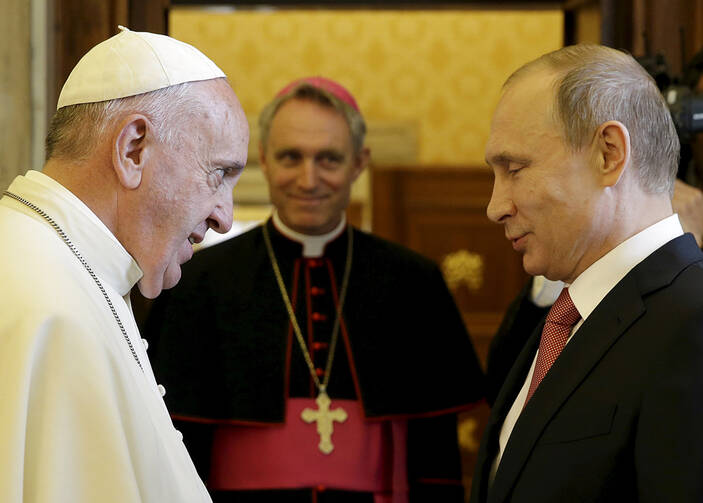 Russian President Vladimir Putin will visit Pope Francis for the third time on July 4, the Vatican announced on June 6.

The two leaders first met on Nov. 25, 2013, and again on June 10, 2015. The fact that they are meeting for a third time shows that President Putin considers Pope Francis an influential player and moral authority on the global stage.

Though the agenda for their private conversation is not known, sources say the situations in Ukraine and the Middle East, particularly in Syria and the Holy Land, will be high on the list, since both have political and religious dimensions that are of concern to both sides. Venezuela is also expected to be discussed.

Both leaders have a particular interest in the situation in Ukraine. Pope Francis has invited the major archbishop, the members of the permanent synod and the metropolitans of the Ukrainian Greek Catholic Church to Rome on July 5 and 6.

The fact that they are meeting for a third time shows that Putin considers Pope Francis an influential player and moral authority on the global stage.

“With this meeting, the Holy Father wishes to give a sign of his closeness to the Ukrainian Greek-Catholic Church that carries out pastoral service both at home and in various places in the world,” the Vatican said in its announcement on May 4.

Moreover, it said, the meeting “will also offer a further opportunity to deepen the analysis of the life and needs of Ukraine, with the aim of identifying the ways in which the Catholic Church, and in particular the Greek-Catholic Church, can dedicate itself ever more effectively to preaching the Gospel, contributing to the support of those who suffer and promoting peace, in agreement, as far as possible, with the Catholic Church of the Latin rite and with other Churches and Christian communities.”

Pope Francis is concerned about the conflict in Ukraine that has gone on for five years and about the failure of the peace agreement reached between Russia and Ukraine in Minsk in February 2015. Some 13,000 people have been killed in the conflict, a quarter of them civilians, and at least 30,000 have been wounded in eastern Ukraine since violence erupted in April 2014, the United Nations Office of the High Commissioner for Human Rights stated in a report on Feb. 25. Russia annexed Crimea in early 2014 in breach of international law, which the Holy See insists should be respected.

Pope Francis and President Putin share a deep concern for the ever-diminishing presence of Christians in the Middle East.

Last month, tensions escalated between Ukraine and Russia when President Putin made it easier for certain categories of Ukrainians and residents of the pro-Russian Donbas separatist areas to get Russian citizenship. His decision was met with strong opposition from the European Union and the United States.

Francis and Mr. Putin are concerned, though for different reasons, about the divisions within the Orthodox world in Ukraine. Mr. Putin, reflecting the position of the Russian Orthodox Church and the patriarchate of Moscow, did not agree with Ecumenical Patriarch Bartholomew’s decision to grant autonomy (the autocephaly status) to the Ukrainian Orthodox Church six months ago.

‘We have set out toward a new Pentecost’: Pope Francis meets with Orthodox leaders in Romania
Gerard O’Connell

Francis, on the other hand, is concerned about the further division within the Orthodox and Christian world. At the same time, he has sought to avoid taking sides in the religious and political conflicts and instead has pushed for upholding the peace accords and has encouraged the Catholic churches in Europe to raise money to help provide humanitarian aid to people on all sides who are suffering from the conflict. The United Nations calculates that 3.5 million Ukrainians will need assistance this year.

Pope Francis, President Putin and the Russian Orthodox Church share a deep concern for the ever-diminishing presence of Christians in the Middle East. They are also concerned at the situation in the Holy Land: the failure to reach a negotiated solution to the Israeli-Palestinian conflict and the question of the status of Jerusalem, both of which have taken a turn for the worse under the Trump administration.

Pope Francis is also expected to press for peace in Syria, where Russia is playing a key role by supporting President Bashar al-Assad in that country’s eight-year civil war.

It remains to be seen whether the possibility of a papal visit to Moscow will be raised, given that Francis has visited several countries in central and eastern Europe since becoming pope. It is known that Mr. Putin wants the pope to come to Russia, but he has yet to convince the Russian Orthodox synod.