‘We have set out toward a new Pentecost’: Pope Francis meets with Orthodox leaders in Romania

‘We have set out toward a new Pentecost’: Pope Francis meets with Orthodox leaders in Romania 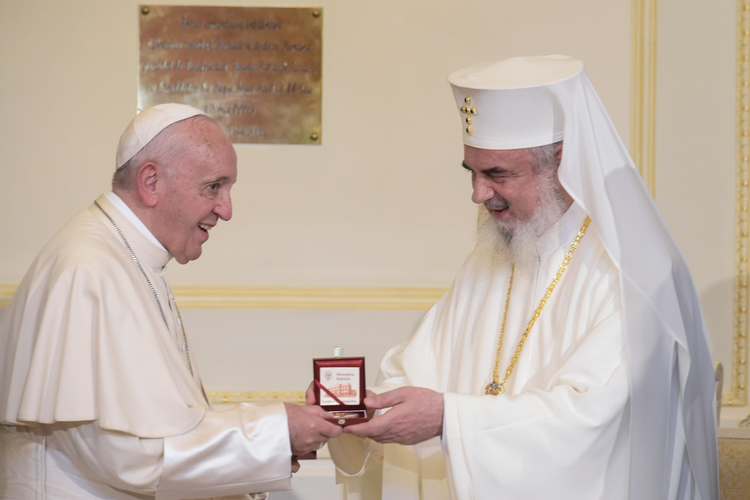 Pope Francis and Romanian Orthodox Patriarch Daniel exchange gifts at the patriarchal palace in Bucharest, Romania, May 31, 2019. The pope is making a three-day visit to Romania. (CNS photo/Vatican Media)

Marking a second historic moment in Catholic-Romanian Orthodox relations, Pope Francis visited Patriarch Daniel in Bucharest on the afternoon of May 31 and told him and the members of the permanent synod, “I have come here as a pilgrim desirous of seeing the Lord’s face in the faces of my brothers.”

His words echoed those of John Paul II—the first pope to come to Romania—who told Patriarch Teoctist and the synod on May 8, 1999: “I have come to contemplate the face of Christ etched in your church; I have come to venerate this suffering face, the pledge to you of new hope.”

Pope Francis’ visit with the Orthodox unfolded in three stages: first, a private face-to-face encounter with the patriarch, then a meeting with the members of the permanent synod where both the patriarch and he spoke, and finally in a visit to the new Orthodox cathedral where the two leaders spoke again and Francis prayed the Our Father in Latin and the patriarch in Romanian, as the synod did not want them praying together.

I had witnessed the meeting between John Paul II and Teoctist in this same building in 1999, and I saw then the empathy, joy and deep friendliness that marked that encounter. I saw something akin to that today. Indeed, what was striking from the beginning of today’s encounter was the real warmth of the welcome given to Pope Francis by Patriarch Daniel on his arrival at the patriarchate and the ease with they spoke together, even joked and laughed. I observed the positive body language, the spontaneous exchanges. It all conveyed an ecumenical message that, to my mind, was more powerful than words. It was ecumenism in action.

Pope Francis, in his scripted address, reminded his Orthodox brothers that “the bonds of faith that unite us go back to the Apostles.”

In his welcome address to Francis, the patriarch pointed out that St. John Paul II’s meeting with Teoctist and the synod is commemorated by a plaque in the hall where they were sitting. He recalled that the Polish and Romanian leaders had experienced communism and “were defenders of the Christian faith.”

He said Catholic and Orthodox believers today are also called “to defend and promote the faith in Christ and the Christian values ​​in a very secular Europe, in order to convey to the younger generation the faith in the merciful love of Christ for the world and the faith in the eternal life of the human person.”

The patriarch said the members of the two churches are also called “to bear witness, defend and promote the traditional Christian family made up of a man, a woman and children, in a Europe marked by a clear demographic decline.”

They are called, he said, to blend “prayer with social action in helping the poor, sick and marginalized people” and “to promote justice, reconciliation and solidarity in society so that the love of Christ for the whole humankind may be perceived.” He concluded by wishing Francis “good health and many years of life: Ad multos annos!” The Orthodox bishops applauded.

Pope Francis, in his scripted address at the patriarchate, reminded his Orthodox brothers that “the bonds of faith that unite us go back to the Apostles, the witnesses of the risen Jesus, and in particular to the bond between Peter and Andrew, who according to tradition brought the faith to these lands.”

He recalled that both Peter and Andrew shed their blood for the faith and consequently “there exists a fraternity of blood that precedes us and that, as a silent and life-giving stream flowing down the centuries, has never ceased to nourish and sustain us on our journey.”

Pope Francis paid homage to what the Christians of this land had been through under the yoke of communism and recalled that “here, as in so many other places nowadays, you have experienced the passover of death and resurrection.”

Pope Francis paid homage to what the Christians of this land had been through under the yoke of communism and recalled that “here, as in so many other places nowadays, you have experienced the passover of death and resurrection.” He added: “Many sons and daughters of this country, from various churches and Christian communities, knew the Friday of persecution, endured the Saturday of silence and experienced the Sunday of rebirth. How many were the martyrs and confessors of faith?

“How many,” he asked, “from different confessions, stood side by side in prisons to support one another in turn!”

In a remark that seemed like an appeal to Catholics and Orthodox to regard each other in a new way, Francis told the Orthodox bishops: “What they suffered for, even to the sacrifice of their lives, is too precious an inheritance to be disregarded or tarnished. It is a shared inheritance, and it summons us to remain close to our brothers and sisters who share it.”

He seemed to imply that this new way of regarding each other happened when Pope John Paul II and Patriarch Teoctist met in this very place 20 years ago. He said that event “contributed not only to renewed relations between Orthodox and Catholics in Romania but also to the Orthodox-Catholic dialogue in general.” Indeed, he said, that visit, “the first of a bishop of Rome to a country of Orthodox majority, opened the way to other similar events.”

He recalled the unforgettable spontaneous shout of “unitate, unitate” from the mainly Orthodox crowd as John Paul II and Patriarch Teoctist concluded their prayer together and said, “It was a proclamation of hope rising up from the people of God, a prophecy that inaugurated a new time: the time of journeying together in the rediscovery and revival of the fraternity that even now unites us.”

He said this “journeying together” must continue and be done “with the strength of memory” but “not the memory of wrongs endured and inflicted, of judgments and prejudices that enclose us in a vicious circle and bring only barrenness.” Rather it should be done with “the memory of roots: the first centuries when the Gospel, preached with boldness and prophetic spirit, encountered and enlightened new peoples and cultures; the first centuries of the martyrs, of the Fathers and the confessors of the faith, the holiness daily lived out and witnessed to by so many simple persons who share the same heaven.”

This “journeying together” must continue and be done “with the strength of memory” but “not the memory of wrongs endured and inflicted.”

Pope Francis told them, “Thank God, our roots are sound and sure,” and “even if their growth has undergone the twists and turns of time,” he said, “the remembrance of steps taken and completed together encourages us to advance to the future in the awareness—certainly—of our differences but above all in thanksgiving for a family atmosphere to be rediscovered and a memory of communion to be revived, that, like a lamp, can light up the steps of our journey.”

Francis told his Orthodox brothers, “We need to help one another not to yield to the seductions of an individualistic ‘culture of hate’ that, perhaps no longer ideological as in the time of the atheist persecution, is nonetheless more persuasive and no less materialist.” He said there is a need for Catholics and Orthodox to collaborate together, as is happening today in many places in Western Europe, as a result of which “in many cases, a relationship of reciprocal trust and friendship has developed, nurtured by concrete gestures of acceptance, support and solidarity.”

Through the growth of this reciprocal knowledge, he said, “many Catholics and Romanian Orthodox have discovered that they are not strangers but brothers, sisters and friends.”

Francis told them, “The path before us leads from Easter to Pentecost: from that Paschal dawn of unity that emerged here 20 years ago, we have set out toward a new Pentecost.” He prayed that on this journey the Holy Spirit “who loves to shape unity from the most beautiful and harmonious diversity” may “sweep away the hesitation that holds us back from bearing witness together to the new life he offers us” and “make us courageous as we experience unprecedented ways of sharing and of mission.”

Patriarch Daniel, in his welcome address to the pope, explained that the Orthodox synod had accepted the Catholic request for Francis to pray in this new cathedral for two reasons: first, because John Paul II had donated $200,000 to the construction of this building—though the money was actually used for to pay for its bells—and second because of “the support that you constantly give to the Romanian Orthodox” by making 426 Catholic churches (including more than 306 in Italy) available to them for their liturgical services.

The faithful in the cathedral applauded enthusiastically when the patriarch concluded his welcome address by repeating his wish to the pope, “Ad multos annos!” (“May you live many years!”).

Pope Francis then spoke and explained what the Our Father can mean for Catholic and Orthodox believers as they journey together to unity. From the Orthodox cathedral, Pope Francis was driven through streets lined with cheering people waving Romanian and Vatican flags to the Catholic cathedral, where he celebrated Mass for the Catholics in this city.

On June 1, he will travel to the famous Marian shrine that is a place of pilgrimage for Hungarian Catholics, who make up the majority of the Latin rite Catholics in Romania.

Well written account. I was very encouraged by the wide acceptance of the Pope and his message by the Synod and crowds of Orthodox faithful. May this ecumenical spirit grow throughout the Orthodox churches.