In abortion-friendly states, Latinos are critical to pro-life efforts 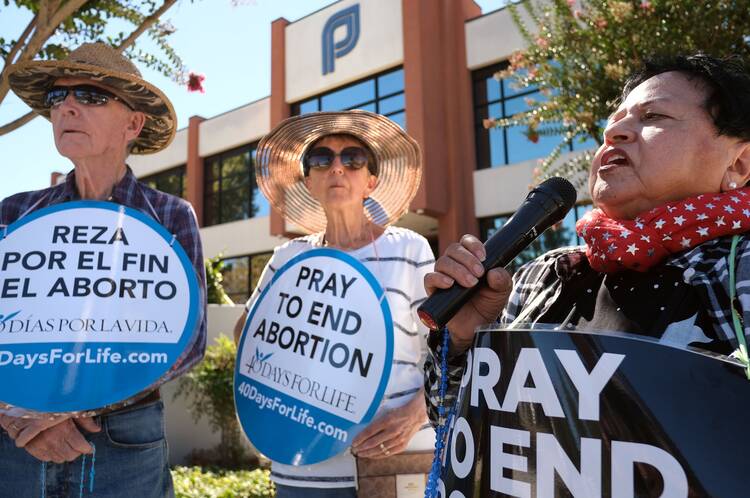 People in San Jose, Calif., participate in a recitation of the rosary outside a Planned Parenthood facility Sept. 28, 2022. (CNS photo/David Maung)

After the Supreme Court overturned Roe v. Wade last June, abortion became illegal in many states. California was not one of them.

“It’s been difficult,” Maria Valadez, the director of Respect Life and Pastoral Care Programs in the Diocese of San Bernardino, Calif., said. “But I feel hopeful that there’s going to be people who continue to engage in this conversation.”

The Latino community will be central to that conversation in California, she said. Surveys of Hispanic Americans paint a complex picture of their views on abortion. But Ms. Valadez believes the community is grounded in something that precedes politics.

Both for family and religious reasons, Ms. Valadez said she always believed abortion was wrong. “Life is something that God gave us, and only God can take away,” she said.

Ms. Valadez saw that sentiment resonate among Latino Catholics in the months leading up to the vote on Prop. 1. She also noted the importance of We Were Born Ready, an initiative overseen by the California Catholic Conference that seeks to mobilize the faith community in the state to serve women, children and families.

“This will enable us to build a culture of life in our state,” Ms. Valadez said of efforts that put service first. “We stay hopeful, and we remain united in prayer and action.”

A focus on the “culture of life” can help bring a much-needed pivot in the conversation, according to Kathleen Domingo, the executive director of the California Catholic Conference.

“How can we make sure that the people who want to have kids are able to have them? That’s the question we’re asking in California.”

“As we saw in California, people don’t want abortion bans,” she said, adding that polling done by the conference found that voters “really feel for women in tough positions.”

“They don’t like the reduction of freedoms,” she said. “They don’t like anything that seems to impinge on their ability to make choices. We haven’t changed hearts and minds.”

That will only happen by actively helping women and mothers in need, she said. The bishops of California have found common ground with legislators on bills helping homeless pregnant women, expanding paid family leave and assisting women who are pregnant or have just given birth in prisons and jails.

“It’s not even about the legality of abortion,” she said. “It’s about the fact that people want to have kids and this climate doesn’t allow them to thrive. How can we make sure that the people who want to have kids are able to have them? That’s the question we’re asking in California.”

“Unless we’re willing to put ourselves on the line and say, ‘What can I actually do for this woman?’ ‘What can I do for this family?’ I just don’t think that we’re going to move forward.”

Challenging economic realities—like the high cost of housing and child care and the lack of job advancement opportunities—interfere with a family being open to more children, Ms. Domingo said.

“Unless we’re willing to put ourselves on the line and say, ‘What can I actually do for this woman?’ ‘What can I do for this family?’ I just don’t think that we’re going to move forward, especially in places like California,” she said. Ms. Domingo said Walking With Mothers in Need, a U.S. Conference of Catholic Bishops program that seeks to accompany mothers throughout the lives of their children, is part of the solution.

“People [would] rather go to a gala and write a check or go to a march once a year—or vote,” Ms. Domingo said. “But the only way we’re going to be effective is if we get out of our comfort zone and practice that radical hospitality, that radical solidarity with people in need.”

But it is not just people in financial distress who need support, she quickly added. “What about the mom expecting her fourth child and just looks overwhelmed? What about our neighbor or someone down the street that brought a baby home? Am I knocking on their door? Am I saying, ‘How can I help you?’

“We are back to educating on the development of the child, what an abortion does, what a heartbeat means to a baby and the damage being done to women. And I believe that Hispanics are very receptive to it.”

“We’re not going to start making political gains until we make social gains,” she said. “It’s time for each one of us to take on the responsibility.”

“We are back to educating on the development of the child, what an abortion does, what a heartbeat means to a baby and the damage being done to women,” he said. “And I believe that Hispanics are very receptive to it.”

National Right to Life is focusing on social media outreach to Latinos in particular, Mr. Rojas said, citing Pew research that found Hispanics use social media at a higher rate than white or Black Americans.

“We have the horrible anniversary of Roe v. Wade that we can never forget because 63 million children were killed because of this decision,” he said. “And we have to commemorate their deaths each and every year.”

But the effort cannot end there, Mr. Rojas said. “Every pro-life organization needs to make a concerted effort to reach out into the Hispanic community at a national and local level,” he said.