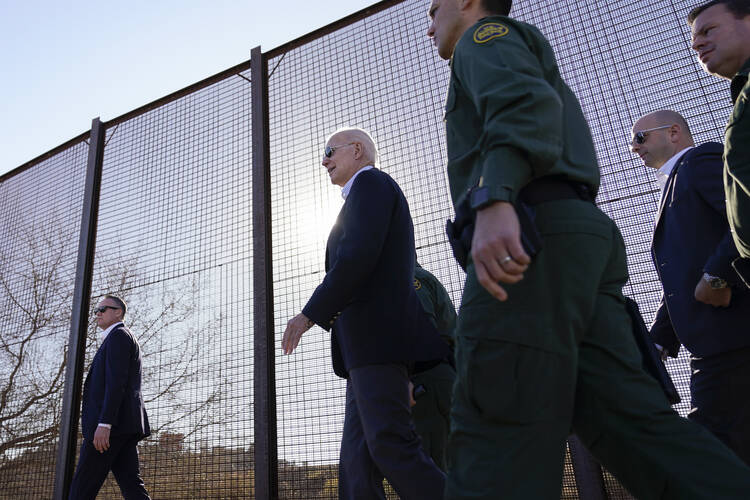 Along with Texas Gov. Greg Abbott and two local officials, Bishop Mark Seitz was one of just four people present on the tarmac to welcome President Biden to El Paso on Sunday, an opportunity for the El Paso bishop to shake hands with the president as he began his brief tour of the U.S.-Mexico border.

Immediately following the handshake, Mr. Biden placed his hand on Bishop Seitz’s arm and pointed to a black S.U.V. that would transport him throughout El Paso. Bishop Seitz was then led to the side of the vehicle and invited to take a seat for the roughly seven-mile drive from the airport to the Bridge of the Americas, connecting El Paso to Juraez, Mexico. That brief handshake opportunity suddenly transformed into a nearly 15-minute long conversation between the prelate who leads the U.S. bishops migration advocacy and the nation’s second Catholic president.

Two days before the president’s arrival in El Paso, Bishop Seitz had released a statement on behalf of the U.S. bishops critical of the Biden administration’s recently announced immigration plans.

“He was very friendly and he told me some stories about meetings with various popes,” Bishop Seitz told America. Mr. Biden was inquisitive about El Paso and his ministry, Bishop Seitz said. The bishop noted that he had never met a president before, much less been given what is a relatively large amount of face time with one.

Though the conversation proved to be genial, there was potential for awkwardness.

Two days before the president’s arrival in El Paso, Bishop Seitz had released a statement on behalf of the U.S. Conference of Catholic Bishops committee on migration critical of the Biden administration’s recently announced immigration plans.

While praising “the announcement of new legal pathways to the United States,” Bishop Seitz said, “it is difficult for us to consider this progress when these same pathways are contingent on preventing those forced to flee their native land from availing themselves of the right to seek asylum at our border.”

“We urge the Administration to reverse its present course in favor of humane solutions that recognize the God-given dignity of migrants.”

The bishop added, “We urge the Administration to reverse its present course in favor of humane solutions that recognize the God-given dignity of migrants and provide equitable access to immigration and humanitarian pathways.”

While the pair used their time in the Chevrolet Suburban to get to know one another, Bishop Seitz raised his concerns about the administration’s proposals during a later event held at the El Paso County Migrant Support Services Center, where Norma Pimentel, M.J., the executive director of Catholic Charities of the Rio Grande Valley, and Ruben Garcia, the founder of Annunciation House, also welcomed Mr. Biden. Bishop Seitz handed Mr. Biden a prayer card depicting the Sacred Heart of Jesus.

On the back, a child living in a migrant shelter in Juárez had written a short prayer, which read: “Lord, I ask that you get me out of here fast, help me with my case, I want to be with my mommy and my sister soon. Amen.” Mr. Biden put the card in his pocket. Later, Bishop Seitz heard from others who spoke to the president that Mr. Biden had mentioned the card.

When President Biden arrived to El Paso, he took @BishopSeitz in the presidential limousine for a private ride and chat. The bishop delivered a homily in a holy card, written by a young migrant child waiting at the border - ‘Lord, I want to be with my mom and sister soon’. pic.twitter.com/UfQCoR2sNH

Mr. Biden spent about four hours in El Paso, where he walked along a metal border fence and observed border officers at work. The president did not meet with migrants and he did not deliver public remarks. Gov. Abbott, a frequent critic of Mr. Biden, handed him a letter at the airport that blamed the president for the “chaos” at the border.

El Paso is currently the biggest corridor for illegal crossings, in large part due to Nicaraguans fleeing repression, crime and poverty in their country. They are among migrants from four countries who are now subject to quick expulsion under new rules enacted by the Biden administration in the past week that drew strong criticism from immigration advocates.

The policy changes announced this past week represent Mr. Biden’s biggest move yet to contain illegal border crossings and will turn away tens of thousands of migrants arriving at the border. At the same time, 30,000 migrants per month from Cuba, Nicaragua, Haiti and Venezuela will get the chance to come to the United States legally as long as they travel by plane, locate a sponsor and pass background checks.

“It’s important that the president come see the reality of what’s going on here at the border.”

The United States will also turn away migrants who do not seek asylum first in a country they traveled through en route to the United States. Migrants are being asked to complete a form on a phone app so that they can go to a port of entry at a pre-scheduled date and time.

Faith-based groups providing assistance to migrants and refugees on the U.S.-Mexico border thanked Mr. Biden for undertaking his first visit to the border as president but expressed similar concerns to the bishop’s.

“We were happy to have President Biden come and see firsthand the situation we are facing in El Paso,” Maria Torres, program manager for Jesuit Refugee Service/USA, said in a statement. “While we know there is not an immediate fix or one that comes from the president alone, hopefully his visit will shine a light on the dire situation we face and that the president will better understand the realities migrants and asylum seekers face. We urge him to work closely with Congress to develop a long-term solution.”

“It’s important that the president come see the reality of what’s going on here at the border and I hope that he took away with him an experience of a community that’s engaged in the work of welcome to vulnerable people on the move,” Dylan Corbett, the founding executive director of Hope Border Institute, told America.

Bishop Seitz said he errs on the side of encounter, hoping that dialogue can lead to change on any number of issues.

Mr. Corbett described El Paso as “a community that knows in its bones that there’s nothing to fear about migration, that it’s not a challenge that we can’t meet.” He said that the Biden administration “has tried to carve out a middle space,” on immigration.

“But what we really, really need is deep reform,” he said.

Bishop Seitz said he was aware of the potential awkwardness that could follow in the wake of his decision to spend time with Mr. Biden. Several other bishops have previously said Mr. Biden’s support for abortion rights and same-sex marriage makes him ineligible to receive communion.

But Bishop Seitz, pointing to the example of Pope Francis, said he errs on the side of encounter, hoping that dialogue can lead to change on any number of issues. He noted that while on the tarmac awaiting Mr. Biden’s arrival, he greeted Gov. Abbott, who holds positions on immigration reform at odds with policies advocated by the U.S. bishops conference.

“I’ve realized that we’re all mixtures of good and evil and if we’ve been able to make good choices, it’s by the grace of God,” Bishop Seitz said. “I can see the good in everybody I meet, even if I disagree with them very, very greatly.”

While congressional action on immigration reform has proven elusive in recent years, Bishop Seitz said he maintains hope that something might come of Mr. Biden’s visit to the border.

“I have hope, and I do know that a lot of people are praying—they’ve assured me of their prayers—that the Holy Spirit would inspire the heart of our leaders, especially President Biden, but others as well, to to take into account the humanity of those people who are seeking refuge in our country,” Bishop Seitz said. “I’m going to try to do my part. And I hope the prayers will continue to come and that the Holy Spirit will do the Spirit’s part.”