As Biden heads to El Paso, meet the bishop working at the heart of the immigration crisis 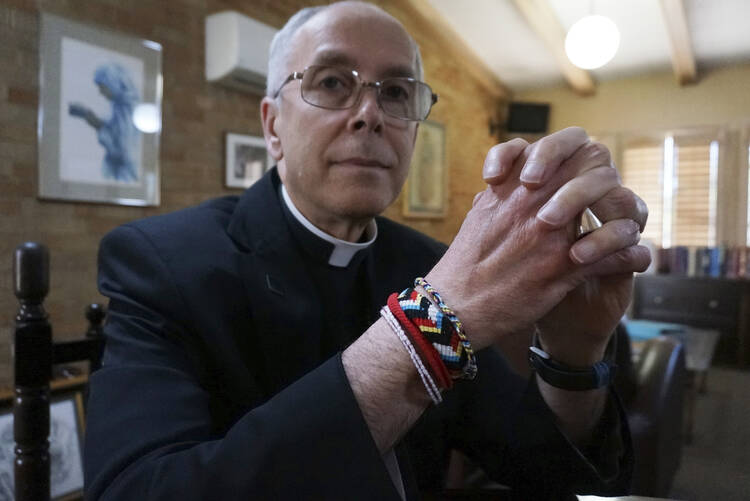 Bishop Mark Seitz of El Paso sits for a portrait in his office in El Paso, Texas, on Monday, April 4, 2022. (AP Photo/Giovanna Dell'Orto)

With a cheerful “soy Marcos” – “I’m Mark,” in Spanish – Bishop Mark Seitz introduced himself to migrants eating soup in the shelter on the grounds of the Catholic Diocese of El Paso, less than two miles from the U.S.-Mexico border.

The migration crisis roiling the borderlands is literally in the backyard of the new chairman of the U.S. Conference of Catholic Bishops’ migration committee, a ministry started a century ago. Seitz will be the first border bishop to serve in this role in at least two decades; he says it will allow him to bring “a new energy to this work from someone who sees it pretty much every day.”

“Immigrants have had the experience of leaving everything that helped them to feel at home and secure in this life behind, and to depend utterly on God as they journey,” Seitz told The Associated Press a few days before Christmas. “They have so much to teach us about how God will accompany us on our journey.”

“Immigrants have had the experience of leaving everything that helped them to feel at home and secure in this life behind, and to depend utterly on God as they journey.”

In the simple shelter that day, 65 migrants, mostly Nicaraguans, rested after being released by U.S. immigration authorities. Volunteers helped families make arrangements to reach sponsors across the United States – from new clothing to plane tickets to shampoo packets small enough to carry past airport security.

El Paso's role in the migration crisis will be highlighted on Sunday when it will be Joe Biden's destination on his first trip to the southern border as president.

On both sides of the border, faith-based organizations have historically done most of the work caring for migrants. Their efforts are particularly visible when unprecedented numbers of new arrivals overwhelm local and federal authorities in cities like El Paso, leaving thousands in the streets.

The Catholic Church often leads these humanitarian efforts. Ministering to migrants and refugees has been a priority for Pope Francis, who in December referred to the Virgin of Guadalupe, much-beloved among Latin American faithful, as “in the middle of the caravans who seek freedoms walking to the north.”

The Vatican, Catholic nonprofits and bishops' conferences across the world collaborate to advocate at all political levels “for just and humane policies,” said Bill Canny, who leads the USCCB's Department of Migration and Refugee Services.

Border bishops like Seitz are “critically important” to that mission because they provide “a real-time perspective,” Canny added.

Ministering to migrants and refugees has been a priority for Pope Francis, who in December referred to the Virgin of Guadalupe as “in the middle of the caravans who seek freedoms walking to the north.”

The political advocacy of U.S. bishops stems from their mission to care for the most vulnerable, said Steven Millies, a professor at the Catholic Theological Union in Chicago. However, Millies said the USCCB tends to be most visible in its anti-abortion fight and other “culture wars,” getting entangled in partisan divisions that can undermine its advocacy for other causes.

To Seitz, who was chairman-elect of the migration committee for a year before starting his three-year term in November, a stronger and nuanced Catholic response to migration “can be something that brings the church to life.”

“I think most people would be surprised, and I hope pleasantly surprised, to see the degree of unanimity among the bishops on this question of immigration,” Seitz said. “So many of the bishops have come up to me and expressed … a concern about how we need to do better to welcome (migrants).”

A Milwaukee native who served as bishop of El Paso for the past decade–which saw three U.S. administrations struggle to manage surges of arrivals of families from Central America and beyond–Seitz knows the challenges first-hand.

As he spoke to the AP, he was notified the Supreme Court had issued a stay for pandemic-era restrictions on asylum-seekers.

“These are, by definition, not the kind of people who can make an application and wait five years to be able to cross.”

Seitz had been working with churches and civil authorities “for a scenario in which higher numbers may be coming across than we’ve ever seen” if restrictions were lifted as expected on Dec. 21 – but the stay offered no relief.

“These are, by definition, not the kind of people who can make an application and wait five years to be able to cross,” Seitz said. “And we’re not even asking those questions right now with Title 42. We don’t ask, why did you come? We simply say, turn around and go back somewhere. And we’re sending them into some of the more unstable and dangerous places in the world.”

Places like Ciudad Juarez, a sprawling metropolis just across the border from El Paso, where thousands of migrants were made to wait for their U.S. asylum appointments during the Trump administration and more have been waiting out Title 42 recently, amid organized crime cartels that routinely prey on them.

Seitz created a relief fund that donated hundreds of thousands of dollars, notably for food and medicine, to shelters there. This fall, it helped open a medical clinic in Juarez’s largest migrant shelter, said Dylan Corbett, director of Hope Border Institute, which manages the clinic.

“It’s really hard, because patterns and policies are constantly evolving,” Corbett said. “We’re in an acute situation at the border.”

Even with Title 42 in place, U.S. officials apprehended and released more than 50,000 asylum-seekers in El Paso from the beginning of October.

Even with Title 42 in place, U.S. officials apprehended and released more than 50,000 asylum-seekers in El Paso from the beginning of October, said the Rev. Michael Gallagher, a Jesuit priest and attorney.

“Bishop Seitz urged parishes to open up empty spaces” like halls as temporary shelters, Gallagher added. His downtown church, Sacred Heart, has been hosting nearly 200 migrants nightly in the gym.

“As people who have been called by Jesus and the Gospel to serve … this sounds like it’s right up our alley,” Seitz explained.

His ministry extends beyond sheltering. For more than a year, he’s been celebrating Mass at a federal shelter for unaccompanied minor migrants and he wears on his right wrist friendship bracelets woven by some of them.

He’s just added a new one, from a mid-December trip to Guatemala to learn from grassroots organizations what pushes so many people on their dangerous northward journey.

That’s an area where Seitz believes the bishops’ conference can make an impact, providing guidance on how the United States can facilitate stability and job creation in origin countries.

Another priority for Seitz focuses on the church’s role in building better understanding between Americans far beyond the borderlands and new immigrants.

Another priority for Seitz focuses on the church’s role in building better understanding between Americans far beyond the borderlands and new immigrants.

His advice starts small – encouraging the faithful to attend Spanish-language Masses, which are increasingly common across the country, and meet migrant churchgoers.

“In that simple act, you will be accomplishing a lot more than you could imagine to help us to welcome and integrate the people who are joining our communities,” Seitz said.

Giovanna Dell’Orto – Associated Press
Show Comments ()
Join the conversation: Login or create an account
Before you can comment, you need to update your profile to include your first and last name, as required in our comments policy. Then reload this page and you'll be set up for commenting. Update your profile