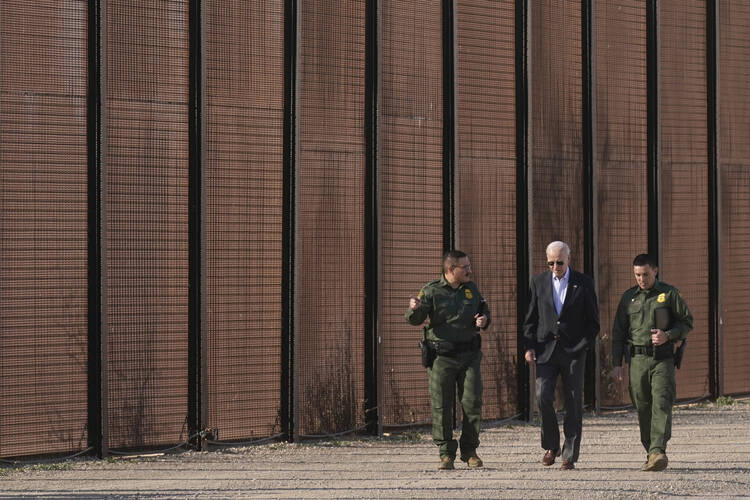 President Biden’s trip to El Paso, Tex., on Sunday, his first visit to the U.S.-Mexico border as president, marked a new low in U.S. immigration policy.

He visited the border to highlight his administration’s recent expansion of the use of Title 42, a public health rule that allows immigration enforcement to immediately return asylum seekers to Mexico without an asylum screening. The policy was first implemented during the Trump administration and, despite promising to end the use of Title 42, Mr. Biden has yet to eliminate it.

Under the plan, Cubans, Haitians and Nicaraguans—whose countries that are unstable and suffer political unrest—are now subject to immediate return to Mexico under Title 42. Venezuelans, seven million of whom have fled political persecution and economic collapse in their country, already are subject to the policy.

In an attempt to mollify pro-immigrant Democrats and immigration advocates, the new program would provide up to 30,000 temporary visas a month to nationals of these nations, provided they fly to U.S. airports and have a U.S. sponsor. In truth, those with the means and connections will benefit from the plan, while the poor and persecuted—those most affected by Title 42 and most in need of protection—will be out of luck. This assumes that this part of the plan is implemented.

Of course, the other side of the aisle has played a central part in the erosion of asylum rights. In fact, the Biden administration is expanding Title 42 in part because of Republican criticism, despite the fact that immigration was not a central issue in the outcome of the 2022 midterms.

Many Republican elected officials have for years used U.S. border policy as a political tool, calling for the construction of a wall and doubling down on Title 42 and other restrictive policies. They have used the border as an excuse to block immigration reform, arguing that it must be “secure” first—a relative term that only they can define.

Now, they are dusting off a familiar tactic, first used during the immigration debate in 2005, attacking nonprofit organizations, including Catholic groups, for providing basic needs support to migrants.

[Related: “Republicans accuse Catholic Charities of breaking the law in its border response”]

The current U.S. border policy denying asylum protection to the persecuted certainly violates basic human rights, not to mention domestic and international law. It is not worthy of a nation built upon the due process of law and respect for human rights and dignity.

And as Pope Francis and the late Pope Benedict XVI would agree, it is contrary to Catholic teaching.

To be clear, under Catholic teaching, a sovereign nation has a right to regulate its borders. However, it must be done in a manner that upholds basic human dignity and human rights. Denying asylum seekers any chance to adjudicate their asylum claims and returning them to danger undermines, if not violates, this basic principle.

The two popes have articulated this position.

In his first trip outside of Rome, Pope Francis, who has made migration a central issue of his papacy, visited the Mediterranean island of Lampedusa, where migrants rescued at sea were detained. He once famously said that nations should build “bridges, not walls.” He also has excoriated European countries, including Italy, that have interdicted migrants in the Mediterranean Sea and returned them to danger.

Likewise, Pope Benedict was far from silent on the issue. In 2013, he reaffirmed the right of the human person to migrate: “The right of persons to migrate—as the Council’s Constitution Gaudium et Spes, no. 65, recalled—is numbered among the fundamental human rights, allowing persons to settle wherever they consider best for the realization of their abilities, aspirations, and plans.”

In his 2010 statement on the World Day of Migrants and Refugees, Pope Benedict stated that countries should welcome refugees, who should be able to live in “peace and safety.” He also commended the U.S. bishops for their work on immigration reform. And he expressed frequent concern about the plight of migrant and refugee children, who, he argued, were especially vulnerable and required special protection.

While some like to talk about Benedict being “conservative” and Francis “liberal,” they both have strongly upheld Catholic teaching on migration, which emphasizes the right of a person to migrate. It is another example of the Catholic Church speaking on issues through a Gospel-based social justice, and not a U.S. political lens.

Hopefully, both Democrats and Republicans will heed their call and work together to fully restore the right to asylum in our country. From a Catholic teaching perspective, immigration measures should focus on human beings, not on scoring political points.

J. Kevin Appleby is the acting executive director of the Center for Migration Studies of New York and the former director of policy for the U.S. Conference of Catholic Bishops.