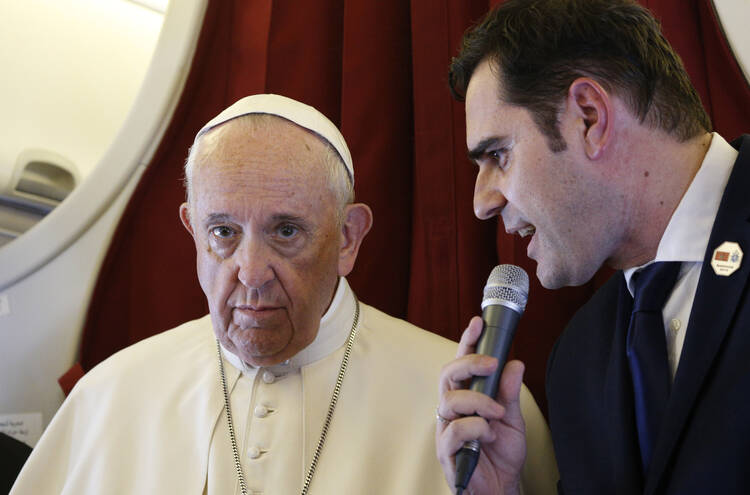 Pope Francis with Alessandro Gisotti, the interim Vatican spokesman, as Francis answers questions from journalists aboard his flight from Rabat, Morocco, to Rome on March 31, 2019. (CNS photo/Paul Haring).

In what could be described as the leitmotif of his visit to Morocco, Pope Francis again emphasized the importance of building bridges in today’s world in a wide-ranging 45-minute in-flight press conference on his return flight to Rome.

He spoke of this theme not only in relation to Christian-Muslim relations, but also to the plight of refugees and migrants in today’s world.

Asked what he saw as the consequences for the future, for world peace and dialogue between cultures from this historic visit to Morocco, the pope said: “I would say that right now there are flowers; the fruits will come afterward. But the flowers are promising. I am content because in these two journeys [to the United Arab Emirates and Morocco], I have been able to speak about that which touches me so much in my heart: peace, unity, fraternity.” In February in Abu Dhabi, Pope Francis and Ahmed el-Tayeb, the grand imam of Egypt’s Al-Azhar, the highest seat of learning in Sunni Islam, used the opportunity of the pope’s historic visit to the U.A.E. to jointly release a statement expressing their hopes for world peace and greater understanding among religions.

Francis said that “with our Muslim brothers and sisters, we have sealed this fraternity in the document of Abu Dhabi; and here in Morocco we have all seen a freedom, a fraternity, and a welcome of all the brothers with very great respect. This is a good flower of coexistence that promises to give fruits. We mustn’t give up!”

Pope Francis: "In every religion there is always an integralist group that does not want to move ahead and lives from bitter memories, past conflicts, and seeks even more war and sows fear."

He acknowledged that it would not be a smooth road ahead: “It’s true there will be more difficulties, many difficulties because sadly there are intransigent groups. But I want to state it clearly: in every religion there is always an integralist group that does not want to move ahead and lives from bitter memories, past conflicts, and seeks even more war and sows fear. We have seen that it is more beautiful to sow hope, to go forward always holding hands.”

Francis commented that “in the dialogue here in Morocco we saw that we need bridges, and we feel pain when we see persons that prefer to build walls. Why do we have pain? Because those that build walls end up being prisoners of the walls that they have built. On the other hand, those who build bridges go forward....To build bridges is for me something that almost goes beyond the human, it needs very great efforts.”

He added, “I have always been touched by a phrase in the novel of Ivo Andrich, The Bridge on Drina.” Andrich wrote that “the bridge is made by God with the wings of the angels so that men might communicate….because men can communicate,” Francis said. “The bridge is for human communication. This is most beautiful, and I have seen it here in Morocco. Instead, walls are against communication; they are for isolation, and those who build them will become prisoners.”

When asked about the appeal that he signed yesterday with King Mohammed VI of Morocco regarding Jerusalem, Francis said: “Always when there is fraternal dialogue there is a relation at various levels. If I may use an image: Dialogue cannot be made in a laboratory. It must be human, and if it’s human, it is with the mind, the heart and the hands.” The common appeal for Jerusalem to be open to all faiths, he commented, “was a step forward not by an authority of Morocco and by one of the Vatican, but by brother believers that suffer at seeing this city of hope still not being as universal as we all want: Jews, Muslims and Christians. We all want this. And for this reason, we have signed this wish: It is a desire, a call to religious fraternity that is symbolized in this city that is all of ours. We are all citizens of Jerusalem, all believers.”

Pope Francis: "Dialogue cannot be made in a laboratory. It must be human, and if it’s human, it is with the mind, the heart and the hands."

One reporter drew Francis’ attention to the fact that Spain has built wire fences topped with blades around two Spanish enclaves, and that President Donald J. Trump has recently said that he wants to close U.S. borders, and moreover wants to suspend aid to three Central American countries. What would Francis say to those rulers and politicians who defend those positions?

“The builders of walls with blades that cut, with knives or with bricks, will become prisoners of the walls they make. History tells us that,” he reemphasized. Referring to a piece of the wire with blades that a Spanish journalist had shown him, Francis said that he “was moved” and “wept” because “such cruelty had never entered my head or heart,” just as it had not entered his heart “to see people drowning” in the Mediterranean Sea. “This is not the way to resolve the grave problem of migration!”

He said he understood that a government can have “a hot potato in its hands” with such problems, but they must be resolved in a different way. He spoke of the fate of those who are sent back to their homelands or held in the prisons of human traffickers who sell the women and children and torture the men, and appealed to the European Union to show humanity. He recalled that when he discussed this problem once with the Greek premier, Alexis Tsipras, he was deeply impressed when the Greek leader said that “human rights come before accords.” That phrase alone, Francis said, merits a Nobel Prize.

Another reporter noted that while Pope Francis has sought to protect and help migrants for years, European politics seem to be going in the opposite direction, and Europe is becoming a bastion against migrants. She said this politics reflects the will of the electors, the majority of whom are Catholics or Christians. Asked whether he felt sad at this, Francis answered, “I see that there are many people of good will, not only Catholics, but good people who are taken by the fear that is preached, usually by the populists.” Francis recalled that “fear is the beginning of dictators,” as was seen in the last century with the fall of the Weimar Republic and the rise of Hitler, “and we know the results.”

We need to learn from history, Francis said: “To sow fear is to reap a harvest of cruelty, of closure and sterility. We need to move forward, but with fear we will not go forward; with walls we will remain closed in.”

Pope Francis: “I see that there are many people of good will, not only Catholics, but good people who are taken by the fear that is preached, usually by the populists.”

In response to questions about the ongoing sex abuse crisis in the church, Pope Francis said that clear laws and procedures are necessary, but we also must engage in “spiritual combat.” Some things, like the abuse crisis and child pornography, he said, “cannot be understood without the mystery of evil.”

The pope said stopping abuse requires a multi-pronged approach, including prayer and penance, and that is why he asked the U.S. bishops not to vote in November 2018 on a new code of conduct for bishops and new procedures for handling allegations raised against bishops. Instead, he asked the bishops to have a retreat and wait until after the February summit to decide how to move forward.

Pope Francis said his 2018 letter to the bishops of Chile regarding the abuse crisis there and the letter he wrote to the U.S. bishops at the beginning of their retreat in January both looked at the “human, scientific” and legal aspects of the crisis as well as the spiritual aspect. The U.S. bishops’ proposals for a code of conduct and a third-party reporting system, he said, “were too much like that of an organization, methodological, and—without their meaning to—neglected the second dimension, the spiritual.”

“We in the church will do everything to end this scourge,” he said.

The U.S. bishops’ proposals for a code of conduct and a third-party reporting system, Francis said, “were too much like that of an organization, methodological, and—without their meaning to—neglected the second dimension, the spiritual.”

In response to a question about the many Muslim-majority countries where freedom of worship is respected, but legal or social pressures prevent Muslims from converting to Christianity, Pope Francis insisted freedom is a concept that grows over time. In fact, he said, there are still Catholics who strongly oppose the Second Vatican Council’s teaching on religious freedom and its insistence that even non-Christians have a right to follow their consciences.

In many so-called Christian countries, he added, doctors and other medical personnel do not have a legal right to conscientiously object to euthanasia, for example. “Removing freedom of conscience is the first step to losing the freedom of religion,” he said.

With additional reporting from CNS.

What’s the objective? Sounds Pollyanna but is it? Maybe the Pope should articulate the reasons why one should be a Catholic? I never see this anymore.

Seriously! Everything he says reminds us of our faith, and our responsibility to our fellow man. That is Catholicism! Moral and social teachings are what our faith is all about, and to pick and choose doesn't cut it.

I would suggest that people read the commentary by David Brooks in the NY Times of April 7, 2019: