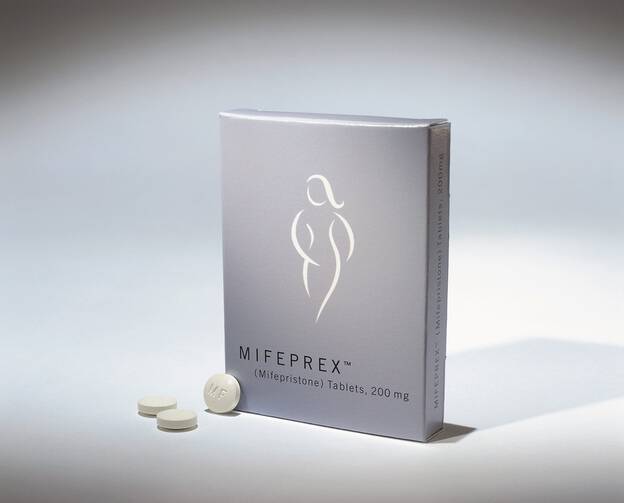 A box of the RU-486 drug, known generically as mifepristone and by its brand name Mifeprex, is seen in an undated handout photo. (OSV News photo/courtesy Danco Laboratories)

The U.S. Food and Drug Administration will allow retail pharmacies to offer abortion pills in the United States for the first time, the agency announced Jan. 3, prompting criticism from Catholic and pro-life groups.

The regulatory change permits the sale of mifepristone, the first of two drugs used in a chemical abortion, at retail pharmacies. The drug could previously only be dispensed by some mail-order pharmacies, or by some doctors or abortion centers. The new F.D.A. rules still require a prescription for the drugs, but will permit a wider range of pharmacies to stock and sell them.

Some Catholic and other pro-life groups have expressed concern about the safety of the drug. In a document outlining its opposition to expanding access to the drug for abortions, the U.S. Conference of Catholic Bishops argued that the F.D.A. rejects safeguards governing its use that are in place in other countries, noting that in Sweden, for example, a woman undergoing a medication abortion would be “supervised by the midwife for 4 to 6 hours at the outpatient clinic.”

In a statement issued Jan. 6, the U.S.C.C.B. wrote, “This week’s action by the FDA not only advances the obvious tragedy of taking the lives of the preborn, but is also harmful to women in need.”

“Overturning the safety protocols around abortion-causing drugs to effectively make them available on demand at pharmacies, requiring no in-person medical supervision, facilitates the isolation of critically vulnerable pregnant women, and invites more risk, pain, and trauma,” the statement read.

The U.S. Food and Drug Administration will allow retail pharmacies to offer abortion pills in the United States for the first time, prompting criticism from Catholic and pro-life groups.

Kristen Day, executive director of nonprofit Democrats for Life of America, said in an email to America that the organization is “deeply concerned” about the safety of women who undergo this treatment.

“After so many years of abortion extremists warning about the dangers of back-alley abortion, this policy facilitates them. This leaves women to perform self-abortion alone without medical assistance,” she wrote. “Our focus should be on providing support for women to carry and raise their children.”

In a statement, Marjorie Dannenfelser, president of Susan B. Anthony Pro-Life America, said: “The Biden administration has once again proved that it values abortion industry profits over women’s safety and unborn children’s lives.”

“Abortion activists want to turn every post office and pharmacy into an abortion business, and the Biden F.D.A. is a willing participant—even while studies show emergency rooms are being flooded with women suffering from serious, life-threatening complications caused by abortion drugs,” Dannenfelser said. “Chemical abortion pills can cause dangerous complications including hemorrhage and infection, and complications are more likely when pills are dispensed without medical screening or follow-up care.”

“This leaves women to perform self-abortion alone without medical assistance,” Kristen Day wrote. “Our focus should be on providing support for women to carry and raise their children.”

Dannenfelser said that some pro-life governors “understand this threat, which is why many states have enacted safeguards to protect women and their unborn children.”

“State lawmakers and Congress must stand as a bulwark against the Biden administration’s pro-abortion extremism,” Dannenfelser said. “We hope to see the F.D.A. do its job to protect the lives of women and put an end to chemical abortions.”

The F.D.A. has called mifepristone “safe when used as indicated and directed.” Studies that have appeared in the New England Journal of Medicine and the Archives of Gynecology and Obstetrics have also ruled the pill to be safe.

Medication abortions are becoming a more common method of abortion, accounting for more than half of the abortions in the United States, according to the Guttmacher Institute, a research center relied on by the abortion industry and advocacy groups.

Some Catholic health care providers do offer options to try to reverse the effects of mifepristone. The pill works by blocking progesterone, a crucial hormone in the development of an embryo. According to the Charlotte Lozier Institute, if a pregnant woman receives a large dose of progesterone within 24 hours of taking mifepristone, and before taking the second drug to complete a chemical abortion, the pregnancy has a nearly 66 percent chance of continuing unharmed.

A U.S.C.C.B. document on abortion pills mentions the procedure and its success rate.

In November 2022, a lawsuit was filed by several pro-life medical groups argued that mifepristone was never properly authorized by the F.D.A., according to Axios. If the judge in the U.S. District Court for the Northern District of Texas issues a temporary injunction, use of the drug could be paused until the case moves forward.

Axios also reported that the pharmacy chain CVS is “evaluating requirements to dispense the drug in states that don't restrict the availability of abortion pills.” Walgreens is also reviewing the policy change.

Reporting from OSV News was used in this article.

More: Abortion / Women in the Church