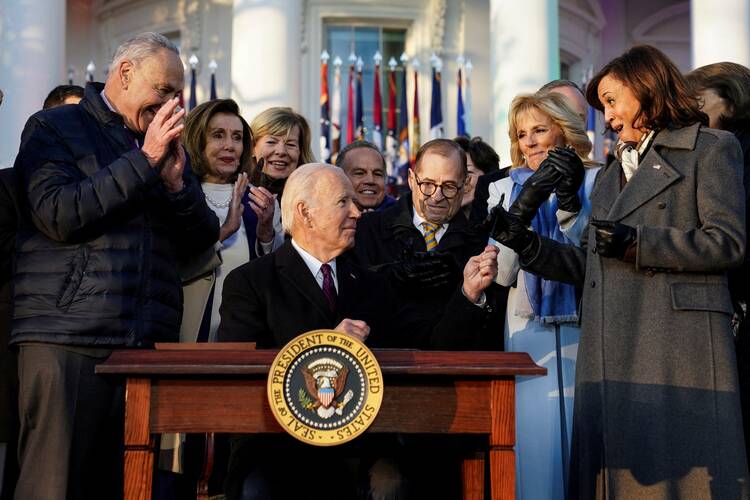 On Dec. 13, President Biden signed the Respect for Marriage Act, giving legal protections to same-sex married couples in all 50 states. Because of this new law, most legal experts say, even if the Supreme Court were to allow states to ban same-sex marriage, those states would have to recognize same-sex marriages performed legally in other states. This is an astonishing achievement, given that only about a quarter of U.S. adults favored same-sex marriage 25 years ago.

Besides its speed in passing Congress this year, the law was notable for attracting bipartisan support: No Democrat opposed it, but 12 Republicans in the Senate and 39 Republicans in the House went against the majority in their own party to pass the bill before a new Congress convenes in January. That is the kind of cooperation that has been so elusive on other issues, including the expansion of the child tax credit, various kinds of immigration reform, a ban on assault weapons and a federal abortion policy that is anywhere close to what a majority of Americans favor.

The Respect for Marriage Act upholds a principle that most Americans can agree on: We are not going back to the 1950s.

So what was the secret sauce for same-sex marriage? First, it doesn’t cost anything. It doesn’t make demands of taxpayers, so opponents can’t make campaign commercials stoking outrage that you’re “footing the bill” for wedding ceremonies you don’t like. And the argument that same-sex marriage “devalues” marriage between men and women has been a spectacular failure. “When you devalue that, you get less of it,” argued former Senator Rick Santorum, a Republican, in 2008, but it always sounded odd to say that heterosexuals would flee committed relationships because gays and lesbians were seeking to form committed relationships.

But the more important reason is that the Respect for Marriage Act upholds a principle that most Americans can agree on: We are not going back to the 1950s.

It does seem to be true that half of the population thinks America has gotten “worse” since the 1950s—49 percent of all U.S. adults said that in a Public Religion Research Institute poll this fall, though that number fell from 59 percent among those over 65 to only 38 percent among those under 30—but they are weighing the real life of today against a mythical past we can never return to. No one wants 1950s health care, or a return to the practice of speeding down highways with children jumping up and down in a car’s back seat, and I trust that almost no one wants to reverse our progress on civil rights and racial integration.

The morality of same-sex marriage remains a legitimate topic of discussion no matter how popular it is.

Certainly, a sizeable number of Americans would still prefer not to be reminded of the existence of gay people, but that number is dwindling. This year, Gallup reported that support for same-sex marriage had reached a record 71 percent among Americans, and Gallup reported in 2020 that “U.S. Catholics’ support for gay marriage has consistently exceeded the national average by five or more percentage points since the 2000s.” Support has also been higher among people who personally know someone who is gay or lesbian (49 percent in a 2009 Gallup poll, compared with 27 percent of those who did not know a gay or lesbian person), and that group is obviously not going to shrink any time soon.

We can credit the Republicans who helped to give President Biden and Democratic congressional leaders a late-year win on this issue with acting on conscience, but they were also pragmatic: Supporting marriage equality is a way to appeal to the younger, more educated, suburban voters who have been moving away from the the G.O.P. under the leadership of Donald Trump.

Could the majority of Americans who support same-sex marriage be morally wrong? Could they be failing to recognize “the unique meaning of marriage as a lifelong, exclusive union of one man and one woman,” as the U.S. Conference of Catholic Bishops put it in a public letter opposing the Respect for Marriage Act?

Supporting marriage equality is a way to appeal to the younger, more educated, suburban voters who have been moving away from the the G.O.P.

Certainly. The morality of same-sex marriage remains a legitimate topic of discussion no matter how popular it is, especially because of how recently it has won acceptance. Even the acts of violence against the L.G.B.T. community, such as the mass shooting at Colorado Springs nightclub, do not mean that we can tolerate only one viewpoint about L.G.B.T. rights in the public square. But supporters of the Respect for Marriage Act do recognize the potential costs of stigmatizing or marginalizing millions of Americans, including friends and family members, and do not see those costs as acceptable in the 21st-century United States. And opponents of the law have not articulated how the refusal to guarantee the recognition of same-sex marriage could avoid imposing those costs, let alone what potential benefits would come at such expense.

It may be useful to contrast same-sex marriage with another hot-button political issue, abortion. On Dec. 14, the New York Times columnist Ross Douthat concluded a series of essays on abortion after the Dobbs decision by essentially admitting that certain changes in American life since the 1950s are irreversible (even if it is still possible to “redirect” the path we are on). Nevertheless, he wrote, it is still valid to question the results of those changes, and he argued that the pro-life movement can achieve success not by promising a return to the past but by developing its “utopianism,” or “its goal of a society for which no definite model yet exists.”

There is a key difference here. Though there is disagreement on how it can be achieved, most Americans can at least imagine a utopia in which abortion becomes increasingly rare, whether because of legal restrictions or because of the elimination of situations in which women feel that abortion is their only choice. But it is a lot more difficult to conceptualize a utopia in which L.G.B.T. people become increasingly rare, less publicly visible or revert to second-class status in American life. There are a lot of aspects of America in the ’50s that we cannot, and should not, try to return to, and the Respect for Marriage Act is a recognition of this.