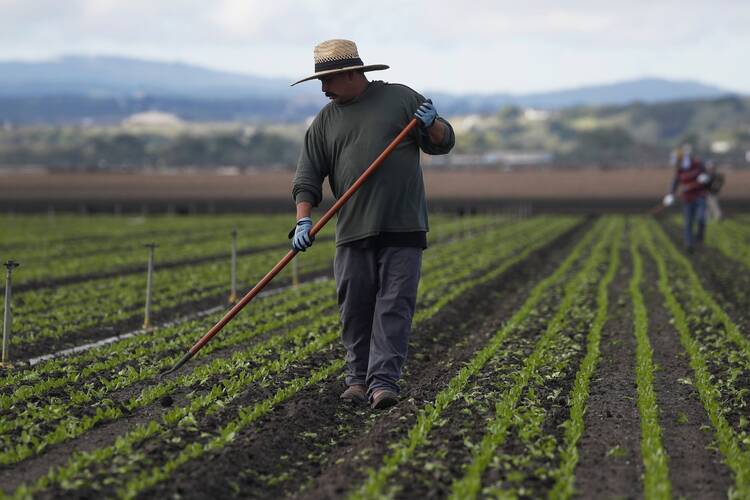 The 117th Congress, now in lame-duck session, has a last-ditch opportunity to approve the first significant agricultural worker reform bill in a generation. Farm workers recently made a strong push for the legislation in Congress, knocking on congressional doors just before the Thanksgiving holiday that their labor makes possible.

The Farm Workforce Modernization Act creates a responsible path to legal status for hundreds of thousands of U.S. farm workers and their families. It would reform the agricultural guest worker program so that the nation can count on a stable workforce whose dignity is better protected by the force of law.

The act is the result of tough compromises between agricultural employers and unions representing farm workers, and legislators of both parties, who deserve credit for helping finalize this important legislation. The act is, no surprise under the circumstances, far from perfect. The path to citizenship it outlines is ungainly and lengthy, and its impact on workers accepted through the proposed changes to the H-2A visa program will have to be carefully evaluated.

Farm workers have a right to the dignity too long denied them by an agriculture system that has consistently exploited their vulnerabilities.

And the legislation addresses only one aspect of the complex of issues affecting workers in U.S. agriculture. It does nothing to better protect farm workers from dangerous pesticides and increasingly perilous heat conditions, and it does not close a loophole in agricultural law that perpetuates the national disgrace of child farm labor. But the F.W.M.A. does take measured, reasonable steps toward the protection of a primarily immigrant labor force that the nation depends on to keep its produce counters well-stocked and holiday tables bountiful.

Just about half of the nation’s 2.4 million agricultural workers are without the documentation that would allow them to reside legally in the United States. That status makes them uniquely vulnerable to unscrupulous employers and dangerous working conditions.

During the worst days of the Covid-19 pandemic, U.S. political and cultural leaders lauded the nation’s farm laborers as essential workers. During that emergency period, questions about immigration status were generally ignored. Americans were just thankful that farm workers remained on the job moving food from fields and farms to America’s supermarkets. Has that heroism been so quickly forgotten?

The hypocrisy remains persistent and glaring. Even as the United States remains dependent on this vast immigrant workforce, it persists in the fantasy that undocumented workers are a menace to be pursued when political winds shift and stronger economic conditions allow, rather than regular and essential contributors to the system that feeds the country.

The Farm Workforce Modernization Act was passed by the House of Representatives with support from 30 Republicans in March 2021. The act needs to be put on the Senate calendar and brought to a floor vote this week. Otherwise the entire process will have to begin again in the next Congress and a GOP-led House that will almost certainly not support new avenues to citizenship for immigrant workers. America joins the U.S. Conference of Catholic Bishops in demanding Senate action on this legislation now. Voters should contact their senators and urge quick action on this rare opportunity for significant immigration reform.

Farm workers have a right to the dignity too long denied them by an agriculture system that has consistently exploited their vulnerabilities. That would not have been possible without the complicity of a U.S. Congress that has historically neglected to protect farm laborers, exempting them from the minimum standards of fairness, safety and justice extended to just about all other working people. There is much that has to be accounted for in this history of indifference. This modest legislation begins that task.