Canada’s euthanasia regime: How many more will die in the name of ‘compassion’? 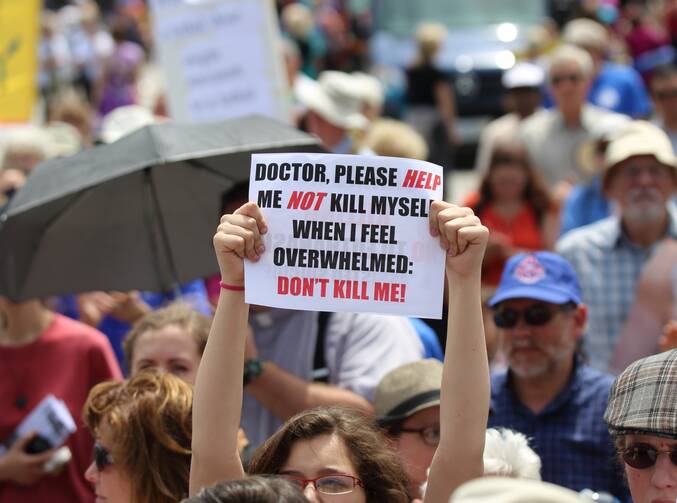 A woman holds up a sign during a rally against assisted suicide in 2016 on Parliament Hill in Ottawa, Ontario. (CNS photo/Art Babych)

Casual observers may understandably believe that the law the Canadian government euphemistically refers to as “medical assistance in dying,” or MAID, is reserved for patients who have a terminal diagnosis and are experiencing unbearable suffering. But they would be mistaken.

In August, The Associated Press reported the story of Alan Nichols, a 61-year-old man with a history of depression who in 2019 was briefly hospitalized because it was thought he might be suicidal. Within a month of his hospital stay, he requested euthanasia and was killed despite protests from family members, who said he was not taking his medications and did not have the capacity to make the decision to die. “His application for euthanasia listed only one health condition as the reason for his request to die,” The A.P. reported: “hearing loss.”

Since Canada amended its criminal code in 2016 to legalize assisted suicide and medical assistance in dying, which the code previously recognized as “culpable homicide,” eligibility for the procedure has been expanded. The original law required natural death to be “reasonably foreseeable” and for the patient’s medical condition to be “grievous and irremediable.” In 2021 the requirement that death be reasonably foreseeable was dropped. Today, anyone over the age of 18 with a serious illness, disease or disability, even if they are otherwise healthy, can be euthanized. (Whether “mature minors” can consent to be killed is currently under consideration.)

There is a reason the Catholic Church often speaks of abortion and euthanasia together as life issues.

Next year, Canada’s medicalized killing regime, already one of the most permissive in the world, is set to expand again. On March 17, 2023, euthanasia will be available to individuals suffering from mental illness, a move that critics warn will have disastrous consequences for Canada’s most vulnerable citizens. In 2020 a group of 50 religious leaders, including the Canadian Conference of Catholic Bishops, warned: “Offering euthanasia or assisted suicide to those living with a disability or chronic illness, but who are not dying, suggests that living with a disability or illness is a fate worse than death. This will create certain pressures to accept such lethal procedures, putting the lives of these Canadians at greater risk in what is now a new regime that sees certain lives can be ended.”

But it is not only people of faith who object to the expansion of this “right” to those who do not face imminent death. In 2021 three human rights experts from the United Nations sent a formal letter to the Canadian government warning that the move would “potentially subject persons with disabilities to discrimination on account of such disability.” Tim Stainton, the director of the Canadian Institute for Inclusion and Citizenship at the University of British Columbia, has called MAID “the biggest existential threat to disabled people since the Nazis’ program in Germany in the 1930s.”

Madeline Li, a psychiatrist who has administered euthanasia and helped shape MAID protocols in Toronto, has told lawmakers that given the lack of standards for assessing mentally ill patients for euthanasia, and indeed the impossibility of knowing whether a psychiatric diagnosis is irremediable, it will be up to doctors—with their unconscious biases and imperfect value judgments—to decide which lives are worth living.

Every death, whether sudden or long expected, peaceful or accompanied by great suffering, is the end of a unique and precious life.

As the disturbing case of Mr. Nichols demonstrates, we will not have to wait until March to see if the worst fears of those who have warned of euthanasia’s slippery slope will materialize. Already, doctors report hearing from low-income disabled or chronically ill patients who are seeking euthanasia because they cannot afford housing or adequate treatment with the social assistance they receive from the government. Patients with disabilities say that doctors have presented euthanasia as an option unprompted and in what can feel like a coercive manner, especially in the context of conversations about the cost of care. In all, 10,000 Canadians were euthanized in 2021, up from about 1,000 in 2016 and representing 3.3 percent of all deaths in the country that year.

There is a reason the Catholic Church often speaks of abortion and euthanasia together as life issues. Both are rooted in the same lie that human dignity is so conditioned upon personal autonomy that profound dependence on others for basic needs can make a life less valuable. The only way to make death “dignified” is to recognize the incalculable dignity of those who die by caring for their needs and accompanying them in their suffering. Every death, whether sudden or long expected, peaceful or accompanied by great suffering, is the end of a unique and precious life. It will come for us all, but, in the words of Pope Francis, “Life is a right, not death, which must be welcomed, not administered.”

As we have learned over the past year following the Supreme Court decision in the Dobbs case to overturn the Roe v. Wade decision, changing the law is only a first step and an insufficient response to the tragedy of abortion. The reason the language of “personal choice” is so effective, in debates over both abortion and euthanasia, is that millions of our brothers and sisters feel trapped by their circumstances or are experiencing inescapable suffering.

But if a mother feels she has no choice but to end the life of her unborn child, that is not freedom. It is a failure of family, friends, neighbors, government and society to give her and her child both the material and relational support they need. If people suffering with anorexia or deep depression, or if grandparents living in isolation and poverty believe the world would be better off without them, choosing to end their lives is not freedom. It is a manifestation of a throwaway culture that would rather discard those who suffer than accompany them. Such a choice aims more to avoid the need to face the reality of suffering ourselves than to offer mercy to others.

In Canada, where the cost of living is rising faster than welfare spending and the health care system has been crippled by the Covid-19 pandemic, some may be tempted to see euthanasia, like many things that come from the evil spirit, as a solution to a seemingly intractable problem—and thus be distracted from or ignore the harder task of investing in palliative care, affordable housing and the mental health care system. But no individual or society gets a free pass when it comes to caring for our fellow citizens, especially the most vulnerable among us. How high must the death toll rise before Canada reconsiders the cost of its so-called compassion?