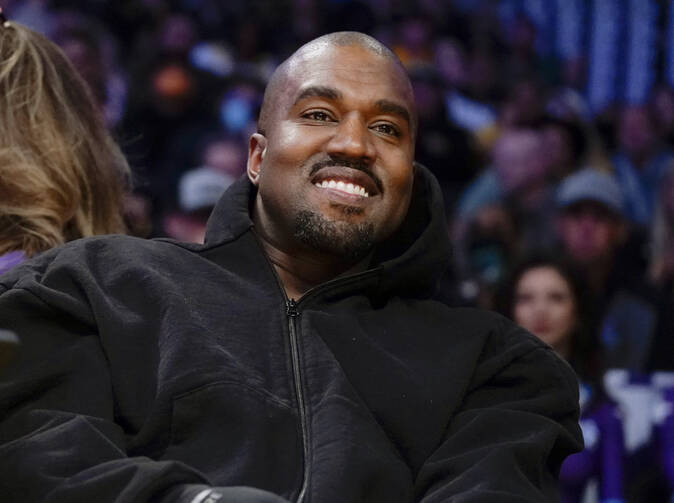 Kanye West watches the first half of an NBA basketball game between the Washington Wizards and the Los Angeles Lakers in Los Angeles, on March 11, 2022. (AP Photo/Ashley Landis, File)

Last week, most Americans spent time with family and friends giving thanks. Giving thanks for still being alive more than two years into a deadly pandemic. Giving thanks for being able to gather with loved ones in person instead of in phone calls. Giving thanks for living in a country where, before breaking bread with those around us, we have the freedom to pray—or not to pray—to the deity or deities of our choice. Some Americans however, spent their Thanksgiving week differently.

President Donald Trump met over dinner with the rapper Kanye West, now known as Ye—arguably more widely known for his vile antisemitic remarks than his music these days—and notorious white nationalist Nick Fuentes, a racist and a Holocaust denier who often invokes his Catholic faith as the inspiration for the values he wants to see take hold of the United States.

As a Catholic and a Republican, I can say without a doubt that Mr. Fuentes does not represent the values of either group. More Catholic Republicans have an obligation to stand up and say so. The hatred spewed by Mr. Fuentes has no foundation in the Catechism or in the Bible. Furthermore, any true Republican of good will and common sense ought not elevate Mr. Fuentes or associate with him.

The hatred spewed by Mr. Fuentes has no foundation in the Catechism or in the Bible.

Unfortunately, however, there is a sizable minority within the Republican Party that, in their devotion to the false god that is former President Trump, turn a blind eye to a former U.S. president attempting to legitimize a white nationalist. Mr. Fuentes does not belong in American public life. His meeting with the former president proves yet again—as Jan. 6, 2021, already clearly did—that Mr. Trump is unfit to seek the office of the presidency.

As Mr. Fuentes seeks to become this country’s most notorious white nationalist, it is worth noting that his own Latino heritage would have up until rather recently, precluded him from being accepted by those whose acclaim he seeks. It is no secret that white supremacist organizations, while they are most known for their bigotry toward Black Americans as well as Jewish Americans, have also long harbored hatred toward Catholics. These days, however, Mr. Fuentes’ background is sadly not so unusual. Take, for example, Henry “Enrique” Tarrio, the Cuban-American leader of the Proud Boys who will soon stand trial for his actions on and around Jan. 6, 2021.

Like many fellow Catholics in the United States, I have Jewish family members and friends, for whom the consequences of this hatred are very real and painful. The Catholic Church’s history, unfortunately, is replete with saddening and appalling examples—most damningly in not doing a great deal more to protect Jewish communities in Europe during the Holocaust—of falling well short of the example of Jesus Christ. That is exactly why it is incumbent upon politically active Catholics—particularly Republicans who can shape the future of their party—to stand up and decry this hateful rhetoric.

In the 20th century, Catholic Republican William F. Buckley Jr. cast out the antisemites of the John Birch Society from the Republican Party. And to their credit, some Republican leaders such as former New Jersey Governor Chris Christie (who is Catholic), and former Vice President Mike Pence (who was raised Catholic and is now an evangelical Christian), have spoken out against Mr. Trump’s outrageous Thanksgiving week meeting.

Mr. Trump should publicly apologize for this meeting, as Mr. Pence has suggested, and denounce these hatemongers with whom he met. He should also publicly meet with members of communities most hurt by this meeting, particularly with members of the Jewish community, committing himself to use his platform as a former president to fight against such hatefulness and expel such antisemites from the Republican Party. Furthermore, the former president should seriously consider if the country really needs him to run again for president, given how his tenure in office ended and how his latest run for office is starting off.

Whatever Mr. Trump chooses to do, a new generation of Catholic Republicans cannot stand idly by. We must denounce this latest incarnation of an old hate and we must do so now. 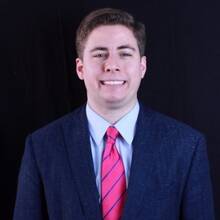 J.P. Carroll is a senior fellow for national security and inclusive governance at the Joseph Rainey Center for Public Policy. He is also the former deputy director of Hispanic media at the Republican National Committee.

JPCarrollDC1
Show Comments ()
Join the conversation: Login or create an account
Before you can comment, you need to update your profile to include your first and last name, as required in our comments policy. Then reload this page and you'll be set up for commenting. Update your profile