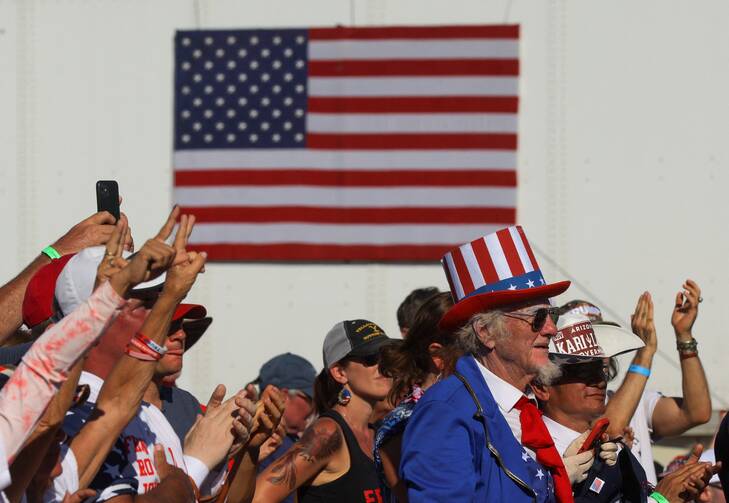 PHOENIX (CNS)—Ahead of the Nov. 8 midterm elections, Arizona’s Catholic bishops alerted voters to “unapproved political efforts” they said are being carried out by a number of organizations and publications claiming to represent the Catholic Church on a variety of issues on the ballot.

In a joint statement released Oct. 31 by the Arizona Catholic Conference in Phoenix, the prelates said these entities are “calling themselves ‘catholic’” but they “do not represent the Catholic Church.”

In a joint statement released by the Arizona Catholic Conference in Phoenix, the prelates said these entities are “calling themselves ‘catholic’” “do not represent the Catholic Church.”

They “cover various ends of the political spectrum and often engage in partisan political endeavors,” the statement added.

Canon 216 of the Code of Canon Law “stresses that no initiative can lay claim to the title ‘catholic’ without the consent of the competent ecclesiastical authority,” the bishops said. “The use of the name ‘catholic’ implies that the initiative in some way represents the Catholic Church.”

“Hence the competent authority—in most instances the local bishop—must give permission for any entity, endeavor or movement to call itself ‘catholic,’” they added. “Those who do so without permission are in violation of church teaching and law.”

“We must stress that the Catholic Church is always politically nonpartisan,” the bishops continued.

The bishops pointed Catholics to a YouTube video with further reflections from them on the matter.

To help U.S. Catholics sort through ballot issues and their choices for public offices, the U.S. bishops offer guidance in their quadrennial election document, “Forming Consciences for Faithful Citizenship: A Call to Political Responsibility.”

It does not tell Catholics how to vote but how to “form their consciences, apply a consistent moral framework to issues facing the nation and world, and shape their choices in elections in the light of Catholic social teaching.”

The document has been offered as a guide to Catholic voters every presidential election year since 1976. It has been updated and revised at four-year intervals to reflect changes in the issues confronting the country since it first appeared. A PDF of the document in English and Spanish is posted on the U.S. Conference of Catholic Bishops’ website at faithfulcitizenship.org, along with additional resources.

On the USCCB's YouTube channel are five videos in four languages—English, Spanish, Tagalog and Vietnamese—that explore various aspects of Catholic social teaching while reflecting the teaching of Pope Francis.