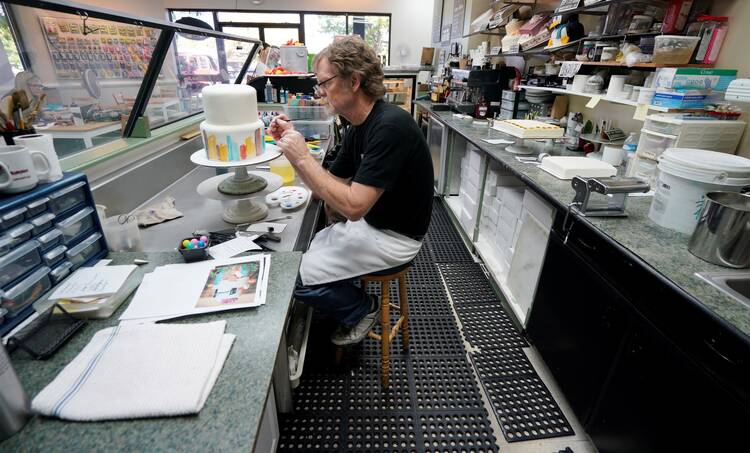 WASHINGTON (CNS)—Colorado baker Jack Phillips, whose refusal to make a same-sex wedding cake on religious grounds went to the Supreme Court, is currently fighting a ruling that he violated the state’s anti-discrimination law for refusing to bake a cake to celebrate a gender transition.

In arguments before Colorado’s appeals court Oct. 5, Phillips’ attorneys from Alliance Defending Freedom urged the court to overturn a ruling issued last year against their client on procedural grounds and said the court should uphold Phillips’ First Amendment rights.

Phillips was sued by a transgender woman, Autumn Scardina, who ordered a pink cake with blue frosting from Phillips’ shop, Masterpiece Cakeshop, in 2017.

During the 2021 trial, according to The Associated Press, Phillips said he believes someone cannot change genders and he did not celebrate “somebody who thinks that they can.”

The judge said Phillips’ refusal to provide the cake was “inextricably intertwined” with his refusal to recognize Scardina as a woman.

His attorney Jake Warner has said in a statement that requiring Phillips to create a cake with a message contrary to his religious beliefs violates his free speech rights.

Scardina initially filed a complaint against Phillips with the state and the civil rights commission, which found probable cause that Phillips had discriminated against her. Phillips, in turn, filed a federal lawsuit against the state of Colorado saying it was engaged in a “crusade to crush” him by pursuing Scardina’s complaint.

AP reported that during last year’s trial over the lawsuit against the baker, Denver District Judge A. Bruce Jones rejected Phillips’ argument that making the cake would constitute compelled speech.

The judge said the cake was simply a product and couldn’t be withheld from people protected by the state’s anti-discrimination law. He said Phillips’ refusal to provide the cake was “inextricably intertwined” with his refusal to recognize Scardina as a woman.

The court said Phillips’ contention “has a significant First Amendment speech component and implicates his deep and sincere religious beliefs.”

The cake case certainly has echoes of the 2018 Masterpiece Cakeshop case where the Supreme Court narrowly sided with Phillips in its 7-2 ruling.

Justice Anthony Kennedy, writing for the majority, said the Colorado Civil Rights Commission had violated the Constitution’s protection of religious freedom in its initial ruling against the baker, who refused to make a wedding cake for the same-sex couple.

But he also said the opinion had a limited scope and “must await further elaboration.”

The court said Phillips’ contention “has a significant First Amendment speech component and implicates his deep and sincere religious beliefs. In this context the baker likely found it difficult to find a line where the customers’ rights to goods and services became a demand for him to exercise the right of his own personal expression for their message, a message he could not express in a way consistent with his religious beliefs.”

The U.S. Conference of Catholic Bishops, joined by the Colorado Catholic Conference and other religious groups, have sided with the designer as they did with the baker five years ago.

The Supreme Court will get a chance to revisit the broader issues raised here in a case it will hear this term about a Colorado graphic designer, Lorie Smith, who does not want to create wedding websites for same-sex couples based on her Christian beliefs about marriage. Smith also is being defended by Alliance Defending Freedom.

The U.S. Conference of Catholic Bishops, joined by the Colorado Catholic Conference and other religious groups, have sided with the designer as they did with the baker five years ago.

In an amicus brief, they said the case gives the court the chance to clarify free speech issues it said the justices fell short of doing in Masterpiece Cakeshop v. Colorado Civil Rights Commission.

The USCCB’s brief said there is a “pressing need for the court to clarify how the compelled speech doctrine applies to wedding-vendor cases and other disputes.”

It also said the current case “provides an appropriate and especially important opportunity to invoke free speech protections again to address the ongoing tensions in wedding-vendor cases and in the current cultural context more broadly” and implored the court to “protect individuals from compelled speech and to provide space in the public square for minority voices.”