‘We are increasingly alarmed by the signs of the times’: Catholic leaders urge lawmakers to protect voting rights 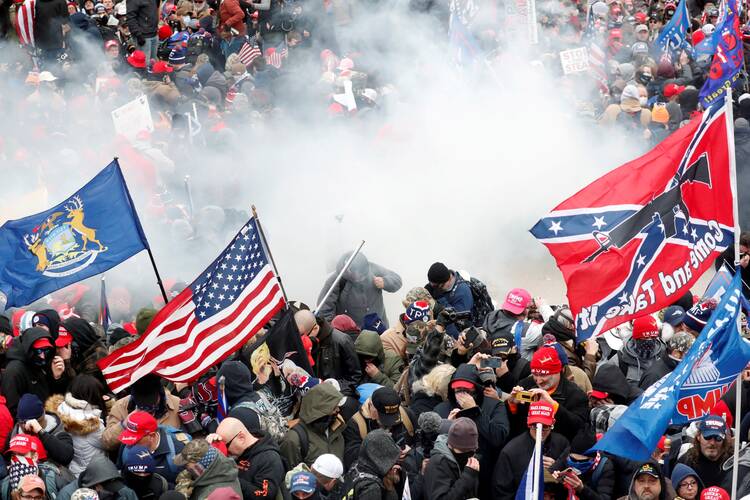 Tear gas is released into a crowd of demonstrators protesting the 2020 election results at the U.S. Capitol in Washington Jan. 6, 2021. (CNS photo/Shannon Stapleton, Reuters)

A group of Catholic leaders have signed a document condemning “threats of political violence and dehumanizing rhetoric toward elected officials” and urging lawmakers to refrain from passing laws that, they say, are “specifically designed to make voting more difficult.”

“As Catholic social justice leaders, sisters, clergy, theologians and Catholic university presidents, we are compelled to speak out at a time when democracy and the future of our nation’s freedoms are threatened by powerful interests,” reads the statement, circulated by the liberal political advocacy group Faith in Public Life.

“Democracies are fragile,” the statement reads. “It’s now time for a renewed commitment to the common good that makes full, equal participation in political life a moral priority.”

“It’s now time for a renewed commitment to the common good that makes full, equal participation in political life a moral priority.”

The signatories of the statement include Carol Zinn, a member of the Sisters of St. Joseph, executive director of the Leadership Conference of Women Religious; James Greenfield, an oblate of St. Francis de Sales, president of DeSales University in Pennsylvania; and leaders from the Sisters of Mercy of the Americas, the National Black Sisters’ Conference, and Pax Christi USA.

“We are increasingly alarmed by the signs of the times,” the statement continues. It also condemns Christian nationalism, which it calls “an ideology heretical to authentic faith,” as well as “the violent insurrection against our country last January 6th.”

Faith in Public Life circulated the statement the day before congressional hearings into the Jan. 6 attack on the Capitol were set to resume, though they were ultimately delayed because of the expected damage from Hurricane Ian in Florida.

The statement warns that an upcoming Supreme Court case could lead to roadblocks for voting rights for racial minorities.

“Catholics must not be silent in the face of growing threats to voters, fair elections and democratic principles,” it says.

The Court is expected to weigh in on a controversial legal theory that claims state courts and state constitutions must yield to state legislatures in matters dealing with federal elections. The case, Moore v. Harper, deals with newly drawn congressional districts in North Carolina, which that state’s Supreme Court found were drawn to give Republicans an unfair advantage. Two North Carolina state legislatures appealed to the Supreme Court.

“Catholics must not be silent in the face of growing threats to voters, fair elections and democratic principles.”

“Our faith tradition teaches that every person deserves equal access to participate fully in our democracy,” read the statement from Catholic leaders, citing words from Pope Francis and documents from the Second Vatican Council.

“Powerful institutions and political leaders are working to rig the system and erect racially discriminatory obstacles to voting and full participation in American life,” the statement continues. “Voter suppression is a sin and silence is complicity.”

According to the Brennan Center for Justice, which describes itself as a nonpartisan law and policy institute, lawmakers in at least 39 states have proposed laws that could make voting more difficult.

“We urge our elected officials in Congress and in state legislatures, especially our fellow Catholics, to support legislation that protects and strengthens the freedom to vote without barriers or interference,” the statement reads.

Last year, the U.S. Conference of Catholic Bishops sent a letter to federal lawmakers, urging them to “to ensure the right to vote is available to all citizens in our democratic society.”

While the bishops did not express support for particular bills, federal lawmakers have been considering legislation that could expand access to voting and increase federal oversight of how elections are conducted.

“Recognizing the importance of ensuring the integrity of elections processes, protecting voting rights is a moral imperative for the common good of a just society,” read the June 2021 letter signed by Archbishop Paul S. Coakley of Oklahoma City, who chairs the bishops’ committee on domestic justice and human development, and Archbishop Shelton J. Fabre of Louisville, who chairs ths bishops’ ad hoc committee against racism. “The human right to vote flows from the inherent dignity of each citizen.”

In a press release accompanying the Faith in Public Life statement, Father Greenfield said that Catholic universities have an essential role “in advocating for equal access to the ballot.”

“When those in power make it harder to vote and even deny the results of fair elections, the foundations of our democracy are threatened,” he said. “Catholic social teaching tells us that all have a right to and responsibility for active participation in society. We are called to work for an inclusive democracy where all Americans can participate in civic life."