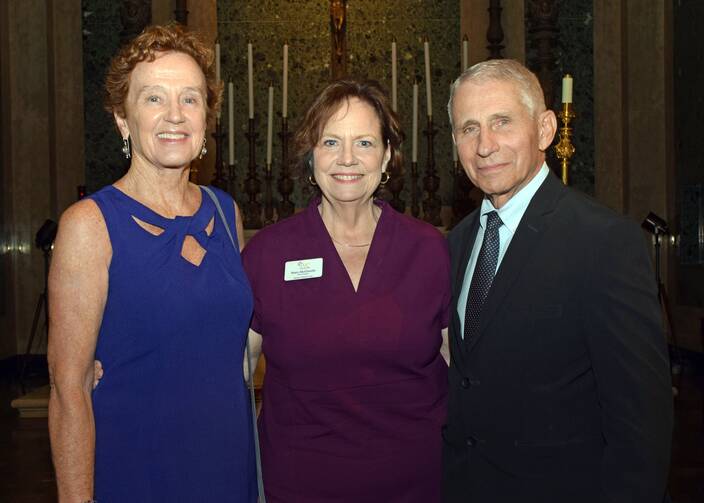 NORTH BETHESDA, Md. (CNS)—For the past two and one-half years as he helped lead the nation’s efforts to confront the COVID-19 pandemic, Dr. Anthony Fauci has become became a familiar face to Americans.

He’s usually speaking at White House press briefings or in TV appearances to urge people to take safety measures like wearing face masks when appropriate and to get the COVID-19 vaccination and booster shot to protect themselves and others against the spread of the virus.

On Sept. 18, Fauci appeared in a different setting, the Our Lady of Lourdes Chapel at Georgetown Preparatory School in the Washington suburb of North Bethesda, alongside Christine Grady, his wife and a National Institutes of Health colleague.

Both received the Pedro Arrupe, S.J. Award for Exemplary Public Service from the Ignatian Volunteer Corps of the National Capital Area during the organization’s “Evening of Gratitude” event, which opened with a prayer service.

Dr. Fauci received the Pedro Arrupe, S.J. Award for Exemplary Public Service from the Ignatian Volunteer Corps of the National Capital Area during the organization’s “Evening of Gratitude” event.

The Ignatian organization provides opportunities to men and women who are 50 and older to serve the poor and work for justice, and to deepen their Christian faith through prayer and reflection in the Ignatian spiritual tradition established by St. Ignatius Loyola, the founder of the Jesuit order, the Society of Jesus.

The new Pedro Arrupe, S.J. Award was named for the superior general of the Jesuits (1965 to 1983), who coined the phrase “men and women for others.”

After receiving the award, Dr. Fauci said it was especially meaningful for him to receive an honor named for a Jesuit superior general.

He noted that from an early age, his parents told him and his sister “that one of the most important things you could do is to provide service to others, and fortunately for me, that was really underscored and imprinted upon me very strongly, because I had the privilege of having eight years of Jesuit training—four years at Regis High School in New York City, and four years at the College of the Holy Cross in Worcester, Massachusetts.”

"[My parents told me] one of the most important things you could do is to provide service to others," said Dr. Fauci. "That was … imprinted upon me very strongly, because I had … eight years of Jesuit training."

“One can say I have the spirit of the Jesuit tradition exemplified by Father Pedro Arrupe—I have those Jesuitical fingerprints all over my professional and my personal life, which is service for others,” he said.

He added, “I have to say quite sincerely, that has been the strength that has really allowed me and driven me to do some of the things I’ve done.”

Dr. Fauci, who is 81, recently announced that he would be stepping down from his government work in December.

“As you’ve heard, I’ve been at the NIH for 54 years,” he said. “I walked onto the campus just a little bit south of here as a 27-year-old physician who just finished his training in internal medicine to start off as a fellow in infectious diseases.

“Little did I know at the time that several years later I would be leading the effort against one of the most formidable infectious diseases we’ve ever had, and that was HIV-AIDS, well before COVID, and then many years later, we’ve had COVID (to confront).”

Speaking about his approach to facing those public health crises, Fauci said, “All of that really was very, very much embedded in my feeling of what I had to do, and that was service to others. That’s why I say it’s particularly meaningful for me to be with you today to receive this award.”

Fauci said it also was meaningful for him to receive the award with his wife, Dr. Grady, a nurse and bioethicist. He described her as a “modest, understated person who does extraordinary things in her professional life … that in every respect are as important as what I’ve done.”

Dr. Grady is the chief of the Department of Bioethics at the National Institutes of Health Clinical Center and is a member of the Presidential Commission for the Study of Bioethical Issues.

She graduated with a degree in nursing and biology from Georgetown University, where she later earned a doctorate in philosophy after receiving a master’s degree in nursing from Boston College, another Jesuit university. As a nurse, clinical researcher and bioethicist, Dr. Grady has specialized in the care of HIV patients and the study of that disease, and the ethics of clinical research.

“Father Arrupe modeled commitment to others through public service and through attention to social justice and correcting injustices,” Dr. Grady said in receiving the award.

“Father Arrupe modeled commitment to others through public service and through attention to social justice and correcting injustices,” Dr. Grady said in receiving the award. “I have had the privilege of devoting my life’s work to serving others, and in small ways, trying to promote justice.”

She added, “I’m grateful to have been guided by the values and experiences bestowed on me by my parents, by my Jesuit education, by my life partner and by my faith, so thank you again for this honor.”

Mary Podesta, vice chair of the Ignatian Volunteer Corps board, helped introduce the couple as the Arrupe award recipients.

“In their life’s work in health care, commitment to the common good and their dedication to improving the lives of others, Christine Grady and Tony Fauci exemplify what it means to lead a life for others, to be women and men for others,” she said.

“In their life’s work in health care … Christine Grady and Tony Fauci exemplify what it means… to be women and men for others,” said Mary Podesta, vice chair of the Ignatian Volunteer Corps board.

Mary McGinnity, the president and CEO of the Ignatian Volunteer Corps, noted that the group has nearly 500 senior volunteers serving in 23 cities across the country, and she praised them as being “the beatitudes in action.

The group’s National Capital Area branch has 55 participants volunteering in about 35 service agencies in Washington, suburban Maryland and Northern Virginia, including at Catholic schools and at programs serving immigrants, the homeless and people with disabilities.

Three others were honored by the Ignatian Volunteer Corps during the evening:

—The Madonna Della Strada Awards went to James Kelley for a lifetime of service to the poor, first as a missionary priest in Tanzania, and later as a layman serving with the Peace Corps the State Department’s Refugee Bureau programs; and to Joseph Raia, for service to others that has marked “every aspect of his life, (in his) family, church, neighborhood and work,” including volunteering with the Father McKenna Center, which serves homeless men.