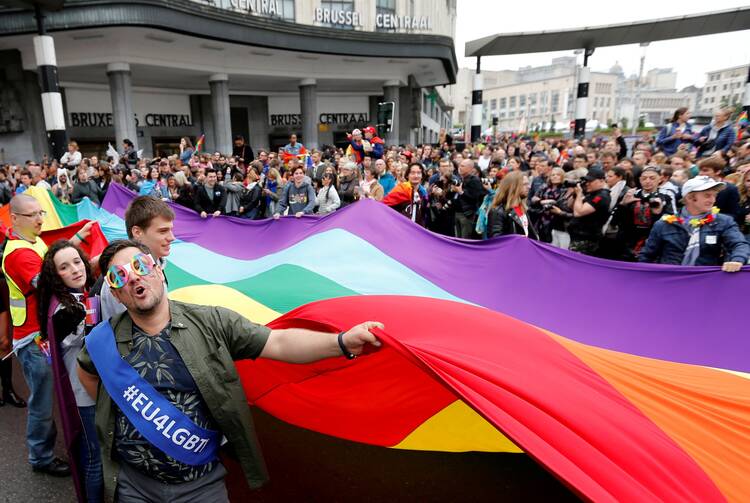 People take part in the annual Belgian LGBT Pride Parade in central Brussels in this May 19, 2018, file photo. The Flemish-speaking bishops of Belgium have authorized a prayer for committed gay couples on the condition it is clear that it is not equivalent to a wedding blessing. (CNS photo/Francois Lenoir, Reuters)

The Flemish-speaking bishops of Belgium have created a prayer liturgy for same-sex couples, part of their effort, they say, to make the church more inclusive and welcoming.

The document, titled “Being Pastorally Close to Homosexual Persons: For a welcoming church that excludes no one,” published on Sept. 20 on the website of the bishops’ conference of Belgium, states that same-sex relationships, which are not considered sacramental marriages by the Catholic Church, can nonetheless be a source of joy and happiness for the couple. The document cites “The Joy of Love,” the apostolic exhortation of 2015 in which Pope Francis wrote that the church needs to accompany families with L.G.B.T. members better, so that “those who manifest a homosexual orientation can receive the assistance they need to understand and fully carry out God’s will in their lives.”

The document suggests that if Catholic pastoral care providers are asked by same-sex couples to bless their relationships, they can use this newly published framework, which recommends using a format that includes “opening word, opening prayer and Scripture reading.”

The document suggests that if Catholic pastoral care providers are asked by same-sex couples to bless their relationships, they can use this newly published framework.

The Vatican reiterated its ban on priests blessing same-sex couples last year, when the Congregation for the Doctrine of the Faith published a statement pointing out that God “does not and cannot bless sin.” The church teaches that gay and lesbian people must be treated with dignity and respect but considers homosexual activity to be morally illicit. The Vatican press office had no comment when asked about the Belgian bishops' statement Sept. 20, according to Catholic News Service.

The Belgian document appears to skirt that restriction on priests blessing same-sex relationships by suggesting that lay people coordinate the prayer services, which would include the wider community praying over the couples. And the Flemish-speaking bishops—which include Cardinal Josef De Kesel of Mechelen-Brussels, Bishop Johan Bonny of Antwerp, Bishop Lodewijk Aerts of Bruges, Bishop Lode Van Hecke of Ghent and Bishop Patrick Hoogmartens of Hasselt—stressed that the “moment of prayer” was not akin to a sacramental marriage, which Catholic doctrine says is a lifelong union between a man and woman, according to a report from the Associated Press on the new document.

The suggested community prayer asks that God “make their commitment to each other strong and faithful.” The document also suggests that the community pray the “Our Father prayer, a closing prayer and a blessing.”

The bishops appointed Willy Bombeek to lead a special office within the Interdiocesan Family Pastoral Service and have asked each diocese to make a similar appointment.

“These blessings will be the beginning of recognizing the full humanity of L.G.B.T.Q. people, by acknowledging that their human need for and expression of love comes from God, and it is indeed a blessing for the couple and the church.”

“These prelates recognize that love is love,” Mr. DeBernardo said. “These blessings will be the beginning of recognizing the full humanity of L.G.B.T.Q. people, by acknowledging that their human need for and expression of love comes from God, and it is indeed a blessing for the couple and the church.”

A spokesman for the Belgian bishops’ conference, Tommy Scholtes, denied that the proposal amounted to a “blessing,” much less a sacramental marriage. He told the Associated Press that it was part of the Belgian bishops’ decision to create contact people within each diocese who will be responsible for pastoral care for gays.

With such “points of contact” created, Mr. Scholtes said, there will be “an opportunity for homosexual couples to pray together, and others will also be able to pray for them.”

The Belgian prayers were published as Catholic dioceses around the world are finalizing reports about listening sessions with lay Catholics, which are part of the pope’s synodal process.

The Belgian prayers were published as Catholic dioceses around the world are finalizing reports about listening sessions with lay Catholics, which are part of the pope’s synodal process. Bishops in many countries said that the treatment of L.G.B.T. Catholics and their families arose in many listening sessions, including some in the United States.

“The hope for a welcoming Church expressed itself clearly with the desire to accompany with authenticity LGBTQ+ persons and their families,” reads a report published yesterday by the U.S. Conference of Catholic Bishops summarizing the listening sessions held throughout the United States. “In order to become a more welcoming Church, there is a deep need for ongoing discernment of the whole Church on how best to accompany our LGBTQ+ brothers and sisters.”