Before her murder by insurgents, Italian nun called niece for prayers 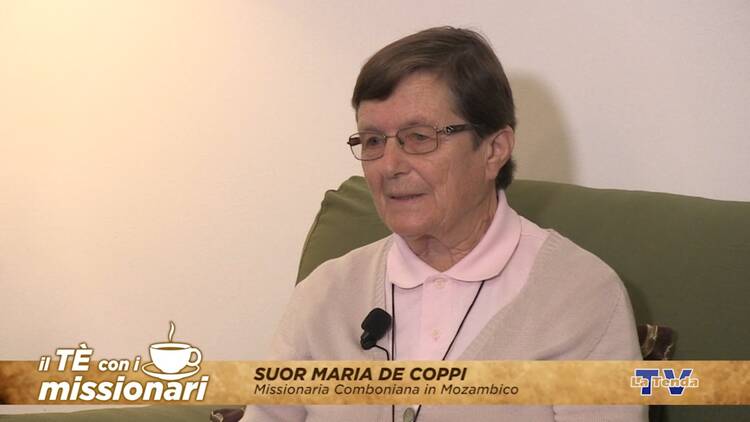 Comboni Sister Maria De Coppi was killed during an attack by militants at a mission in the village of Chipene in the province of Nampula, Mozambique, during the night between Sept. 6-7, 2022. (CNS photo/courtesy La Tenda Tv Vittorio Veneto)

VATICAN CITY (CNS)—Perhaps just hours or less before her murder in northern Mozambique as militants swept into the area, Comboni Sister Maria De Coppi left a voice message with her niece, urging her to pray for the people on the run.

“Hello, Gabriella, good evening. I just wanted to tell you the situation here is agonizing, it’s not good. It is very tense,” was the voice message Comboni Sister Gabriella Bottani received from her aunt at 8 p.m. Sept. 6. The audio was posted online Sept. 7 by the Italian bishops’ television news program, TG2000.

“Everyone here is fleeing, the people are running away. It is a very, very sad situation,” Sister De Coppi said, after describing some recent attacks that occurred recently not far from her location at a mission in the village of Chipene in the province of Nampula.

“Pray for us, that the Lord protects us and also these people. Goodbye, good night,” she said, ending her message.

“I asked her, ‘Auntie, you’re not leaving?’ and, after a moment of silence, she answered ‘I don’t know, I want to wait,” Comboni Sister Gabriella Bottani said of her aunt, Comboni Sister Maria De Coppi.

According to the Vatican newspaper Sept. 8, Sister Bottani, who is international coordinator of the Talitha Kum anti-trafficking network based in Rome, called her aunt back as soon as she heard the message.

“I asked her, ‘Auntie, you’re not leaving?’ and, after a moment of silence, she answered ‘I don’t know, I want to wait,” Sister Bottani said, according to the Vatican newspaper article.

According to Fides, the information service of the Pontifical Mission Societies, Italian Sister De Coppi, 84, was killed by a bullet to the head during the night between Sept. 6 and 7 during an attack on their mission. She had been serving in Mozambique since 1963.

According to reports sent to Fides, those who attacked destroyed the mission’s structures, including the church, the hospital and the primary and secondary school. Fides reported the nun was killed while trying to reach the dormitory where the few remaining students were.

Other sisters and two Italian missionary priests were able to escape and hide: Father Loris Vignandel, 45, and Father Lorenzo Barro, who is the rector of a diocesan seminary in the city of Destra Tagliamento.

The BBC reported Sept. 8 that the Islamic State group (IS) claimed responsibility for the attack, which killed four Christians, including Sister De Coppi. IS said it killed the nun because she had “excessively engaged in spreading Christianity,” the BBC reported.

Archbishop Inácio Saúre of Nampula, Mozambique, told the information service Fides that if the militants’ claims are true, then Sister De Coppi “is truly a martyr of the faith.”

Archbishop Inácio Saúre of Nampula, Mozambique, told Fides that if the militants’ claims are true, then Sister De Coppi “is truly a martyr of the faith.”

While most jihadist attacks have been in the neighboring province of Cabo Delgado, attacks in the province of Nampula began Sept. 2 and occurred again Sept. 6 in Chipene, the archbishop said Sept. 8.

“The population is disoriented and suffers a lot because they live in uncertainty and do not know what to do, many are fleeing but do not know where to go,” Archbishop Saúre told Fides.

“I spoke with the bishop of Nancala (where the Chipene mission is located), and he told me that the authorities have sent the military there, but that the population is scared,” he told Fides.

Armed violence began in 2017, with some attacks claimed by the Islamic State extremist group, resulting in more than 4,000 people killed and 800,000 more forced to flee their homes.