Interview: The world has forgotten about the war in Syria. Catholics have a responsibility to be Good Samaritans. 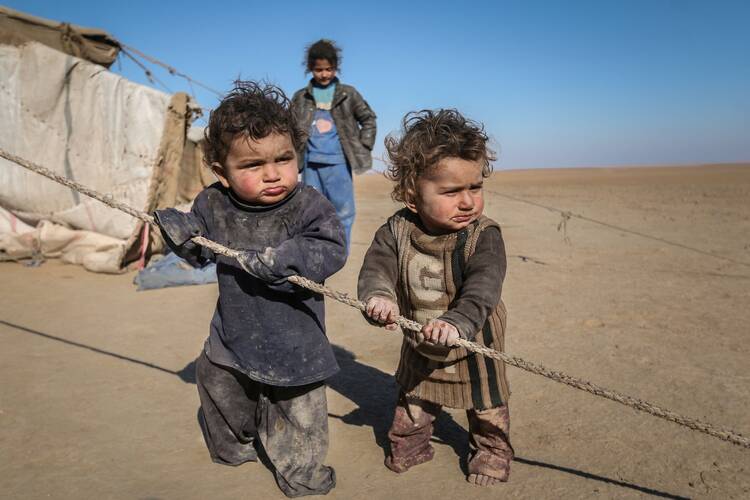 “When we think of Syria, there comes to mind the verse of the Book of Lamentations: ‘Vast as the sea is your ruin; who can heal you?’” Pope Francis said when he greeted AVSI, an Italian development nonprofit. The group works in close collaboration with the Holy See to keep three hospitals and four medical centers open in a country that has been devastated by civil war for the past 12 years.

“If we consider the number of the dead and wounded, the destruction of entire quarters and villages, as well as important infrastructure, including health care institutions, it is natural to ask: ‘Syria, who can now heal you?’” Francis said. A report published by the U.N. Human Rights Office on June 28 estimates 306,887 civilians were killed between March 1, 2011, and March 31, 2021, in Syria due to the conflict. This means that on average, every single day for the past 10 years, 83 civilians suffered violent deaths due to the conflict.

According to the United Nations, Syria had a population of 22 million and was a relatively rich country before the conflict started in March 2011 when the government of President Bashar al-Assad violently suppressed the pro-democracy protests that called for his resignation. The brutal crackdown caused opposition groups to take up arms and the outbreak of civil war. Since then, more than half of the pre-war population have fled their homes. Some 6.9 million are internally displaced, with more than two million living in tented camps with limited access to basic services. Another 6.8 million are refugees or asylum-seekers abroad. By February 2022, the United Nations said more than 12 million Syrians inside the country were struggling to find enough food each day.

“When we think of Syria, there comes to mind the verse of the Book of Lamentations: ‘Vast as the sea is your ruin; who can heal you?’” Pope Francis said.

“International observers tell us that the crisis in Syria continues to be one of the most serious worldwide, in terms of destruction, growing humanitarian needs, social and economic collapse, and poverty and famine at dire levels,” Pope Francis stated as he greeted the AVSI delegation.

The delegation was accompanied by Italian Cardinal Mario Zenari, 76, who has been the papal nuncio to Syria for the past 14 years and invited AVSI to sponsor the Open Hospitals project in 2016. In November of that same year, Francis made then-Archbishop Zenari a cardinal in a gesture not only to reward his courage but also to draw the world’s attention to this seemingly endless conflict.

The cardinal, together with AVSI, gave the pope an icon of Jesus the Good Samaritan. Commenting on this gift, Francis said, “The man in the Gospel parable—beaten, robbed and left half dead by the side of the road—can serve as another tragic image of Syria, beaten, robbed and abandoned for dead on the roadside. Yet not forgotten or abandoned by Christ, the Good Samaritan, and by so many other good Samaritans: individuals, associations and institutions” including “several hundred of these good Samaritans, including several volunteers, have lost their lives helping their neighbors.”

Francis recalled that he had written in the encyclical “Fratelli Tutti” that “the story of the Good Samaritan is constantly being repeated. We can see this clearly as social and political inertia are turning many parts of our world into a desolate byway, even as domestic and international disputes and the robbing of opportunities are leaving great numbers of the marginalized stranded on the roadside.” Francis added, “I asked everyone to consider that all of us have a responsibility for the wounded, those of our own people and all the peoples of the earth.”

“I asked everyone to consider that all of us have a responsibility for the wounded, those of our own people and all the peoples of the earth.”

Speaking at a press conference in Rome organized by AVSI on Sept. 2, the day before the papal audience, Cardinal Zenari said: “Syria has lost its voice; it is losing hope. Syria has lost its youth, money, gas and a voice. It has lost so many lives, and no construction is being done.” The country is now in the 12th year of a civil war, he said, but with the war now in Ukraine, “nobody is listening” to its cry for help. “We are not selling the news about Syria anymore; we’re not selling. It’s terrible. And there is donor fatigue,” the cardinal said.

He said the country is suffering not only from armed conflict but under the sanctions imposed on Syria by the international community. In a meeting with English-speaking journalists following the press conference, America asked Cardinal Zenari if he would describe the situation in Syria as a stalemate. “The situation,” he said, “is more complicated with the war in Ukraine because Syria has chosen one way”—meaning President Assad has sided with Russia—“and this cannot help especially for the lifting of the sanctions, and this is an enormous problem.” He said the result is that “we are transforming the entire population of Syria into beggars, we are depriving the people of their dignity.” He lamented the fact that Syria’s plight has mostly been forgotten by the international community.

Asked if he is able to have relations with President Assad, the cardinal said he has met him “only three times” because, he said, “I must have the green light from my authorities [in the Vatican], otherwise it is misleading. If I go to meet the [Syrian] authorities, they can say the Vatican is with us, and I cannot reply. You see there is no freedom of speech.”

He said he first met the president when he presented his credentials. The second time, he was part of a Vatican delegation and delivered a letter from Pope Francis “when there was the crisis in Aleppo [in 2016]. He read it with great respect, and the result was what we know.”

Cardinal Zenari: “We are transforming the entire population of Syria into beggars, we are depriving the people of their dignity.”

The cardinal was referring to the fact that an official Holy See delegation was able to visit Aleppo for the first time in January 2017 after an agreement was reached between the warring sides that led to an end of four years of urban conflict and the government taking full control of the city. The delegation helped to launch a humanitarian project by Caritas, met religious and civic authorities and were warmly welcomed by the Catholic community.

The third time “was to accompany Cardinal Turkson when he brought a letter from the pope, during the crisis of Idlip. And he received with great respect the letter. He said give me one or two minutes to read it, and he read it quickly. The pope wanted him to stop the conflict immediately at that time—it was July 22—because in December one million people had to leave their villages in snow, in rain.”

Responding to another question from America as to what he sees happening in Syria, beyond the stalemate he had mentioned, Cardinal Zenari said, “I am the dean of the diplomatic corps, but all the democratic countries left 10 years ago, so there is no dialogue now. This is the problem.”

When America noted that the Russian Orthodox Church claims to be doing a lot of humanitarian work in Syria, the cardinal said, “You see, Putin thinks to replace France in the Middle East. Until recently, France was the country that was protector of the Christians there. Now Russia wants to replace France. Thus [Putin] wants the Russian Orthodox Church to have sufficient money to help.” When I asked him if the Russian Orthodox Church has projects on the ground like Open Hospitals, the cardinal replied: “Certainly, there are projects. In fact, all the churches have projects.” He added, “I must say, we can have our opinions about the [Assad] regime, but until now, the churches have free hands to organize humanitarian aid. They know that we are bringing assistance and money, but they let churches do this. Of course, the regime expects support, political support, for this, but until now the churches have a free hand to organize humanitarian aid.”

“Christians count for about 2 percent of the population in Syria, but the number is decreasing,” and “the youth, too, are decreasing; they see no future, no jobs.”

Responding to another question from America, the cardinal said, “Christians count for about 2 percent of the population in Syria, but the number is decreasing,” and “the youth, too, are decreasing; they see no future, no jobs, they have nothing. We are losing the young people, qualified young people, too, and that is another bomb in the country: the departure of young people.”

Cardinal Zenari spoke to the press before a Sept. 2 conference organized by the AVSI Foundation for their Open Hospitals project in Syria is also supported by the Vatican dicasteries for Eastern Churches and for Integral Human Development. Over the past five years, the project has provided free medical treatment to over 80,000 poor people in Syria, both Muslims and Christians, in three hospitals and four dispensaries. It not only pays the operating costs of these structures but also the salaries of doctors, nurses and medical personnel who work there. He said paying their salaries is very important because in these years so many doctors and medical personnel have left the country because they were not being paid.

In his talk, Pope Francis praised the work done by the Open Hospitals project and their commitment to serve all who come regardless of ethnic or religious affiliation. He said this “is the hallmark of a church that seeks to be a home with open doors, a place of human fraternity.”

Giampaolo Silvestri, the secretary general of AVSI, told reporters that there is “no reconstruction” happening in the country and the resources his N.G.O. has “are insufficient” compared to the growing needs of the population, as poverty rates and medical needs continue to rise. “Our appeal today is not to forget Syria,” he concluded.

Father Fady Azar, a Franciscan who is in charge of the Open Hospitals medical dispensary in Latakia in western Syria, described the entire project as “an act of divine intervention, a miracle for the Syrian people” for whom “life is impossible” today because there are “shortages of everything.” He emphasized the need for the international community to do something to help Syria.