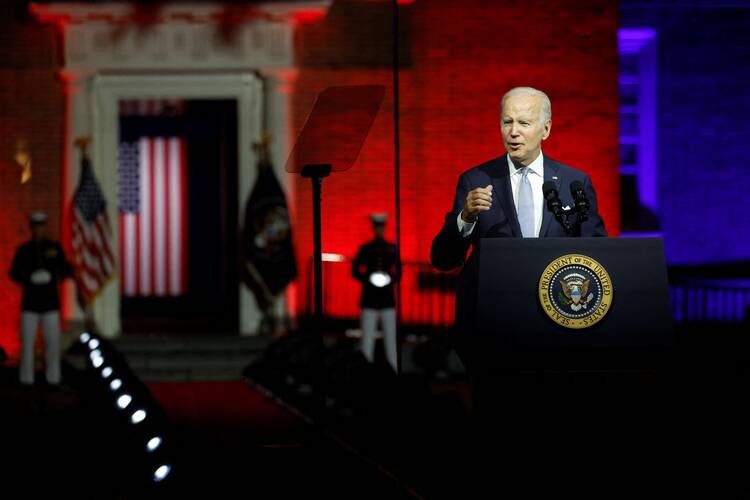 President Joe Biden delivers remarks on what he calls the "continued battle for the Soul of the Nation" in front of Independence Hall in Philadelphia Sept. 1, 2022. (CNS photo/Jonathan Ernst, Reuters)

Standing before the majestic backdrop of Independence Hall in Philadelphia, President Joseph R. Biden Jr. addressed the nation on Sept. 1, saying that “Donald Trump and the MAGA Republicans represent an extremism that threatens the very foundations of our republic.” In a speech that lasted just a little over 25 minutes, Mr. Biden spoke of how “MAGA Republicans do not respect the Constitution.... They do not believe in the rule of law. They do not recognize the will of the people.”

The president will get no argument from me there. It is clear that we face an unprecedented threat from within, one that’s been metastasizing for years. Partisanship begat polarization, which begat contempt, which now threatens violence. According to a recent survey by the Institute of Politics at the University of Chicago, “across party lines, over a quarter of voters—28%—agreed that ‘it may be necessary at some point soon for citizens to take up arms against the government.’”

This is clearly no ordinary time, and the president’s extraordinary message at Philadelphia—part warning, part exhortation—was therefore welcome, but also demonstrated why he is an imperfect messenger.

This is clearly no ordinary time, and the president’s extraordinary message—part warning, part exhortation—was therefore welcome. But Mr. Biden also demonstrated why he is an imperfect messenger and why his words will likely fall on deaf ears. For starters, he should have denounced the members of his own party who are cynically supporting MAGA candidates in order to gain an advantage in the autumn election. That he did not undermined the moral force of his argument. But the speech was also an unwieldy twofer. By attempting to combine a statesmanlike appeal to our better angels with a partisan appeal to his policies, Mr. Biden did neither fully. His eloquent appeal to the American spirit was quickly followed by a pedestrian recitation of what he views as his policy achievements. Most Americans will have applauded the first part. Some will have applauded the second. He needed to deliver a speech that most everyone could applaud throughout.

To be sure, every president has to wear several hats: head of state, head of government, head of party. That’s why it is important that a president be clear in his or her own mind—and that he or she make it clear to the audience—just which hat he or she is wearing at a given moment. At times Mr. Biden appeared to be talking to all of us; at other times he appeared to be talking only to his base. This just confused things, as in passages like this one: “MAGA forces are determined to take this country backwards,” Mr. Biden said. “Backwards to an America where there is no right to choose, no right to privacy, no right to contraception, no right to marry who you love.”

MAGA forces may want to restrict access to abortion and contraception, and they may oppose same-sex marriage—but that’s not why they are an existential threat to the constitutional order. There are many Americans who hold similar views and yet are not attempting to overthrow the republic. I fear that Mr. Biden’s failure to make such distinctions is why half the country will have tuned him out. That’s a missed opportunity. We know that nearly a third of those who voted for Donald Trump in 2020 are willing to consider a different candidate in 2024. Did this speech convince any of them to do that?

To be fair, Mr. Biden did make it clear that he was not lumping together all Republicans: “Not every Republican, not even the majority of Republicans, are MAGA Republicans,” he said. “Not every Republican embraces their extreme ideology.” This is a useful and necessary distinction, but seven words, even when spoken by a president, are not enough to undo the damage already done. As Eve Fairbanks recently observed in The Washington Post, Democrats in recent years “have called Trump supporters bigots, cultists, ‘psychotic’ and developmentally injured, ‘pathological,’ stricken by ‘mental shortcomings,’ and ‘akin to drug addicts.’” It’s not just Democrats who engage in name calling, of course, but their name calling is more consequential. That’s because the Democrats need to actually change minds. They need to convince the 30 percent of folks who voted for Mr. Trump, but might not vote for him again, that the Democrats actually care about the things that these voters care about.

Most of the people who voted for Mr. Trump are not the MAGA maniacs Mr. Biden is worried about. They are not intent on bringing down the republic. They also distrust parties and politicians, and they are therefore more likely to discount Mr. Biden’s warning. But those voters are not the Trump voters interviewed by the media or the ones we see in our newsfeeds or in our imaginations. The Democrats and never-Trumpers are obsessed with the loud and visible element of Trump voters who can never be persuaded. They should be focused instead on those who could be. I wish President Biden had delivered a speech that truly spoke to all of us, but I especially wish he had delivered a speech that spoke to them. For the stakes are high and the time is short.