I was once adamantly pro-choice. Pro-lifers can learn from my conversion. 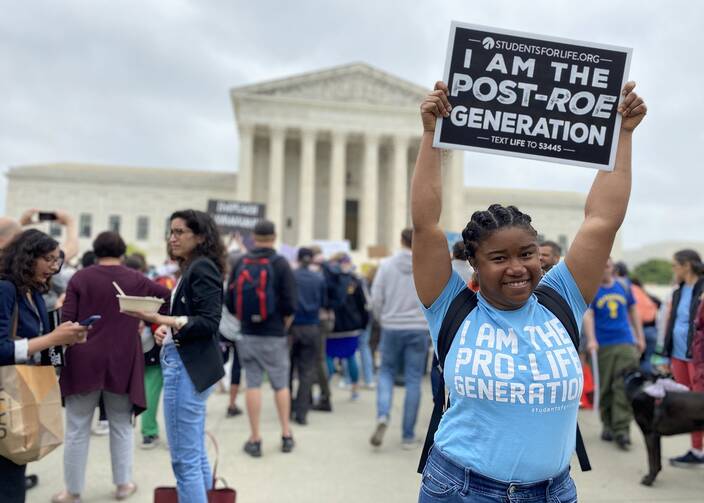 Norvilia Etienne, of Students for Life, holds a sign outside the Supreme Court of the United States on May 3, 2022, the day after a draft of the court's opinion was leaked signaling that the court was leaning toward overturning Roe v. Wade. (CNS photo/Rhina Guidos)

I grew up pro-choice. Until about two years ago, there was no question in my mind that women should have the right to abort unwanted pregnancies. This was not because of any particular belief about whether a fetus should have all the rights of a person; rather, I was pro-choice because I was a Democrat, and because the Republican Party repelled me.

I thought (and still do) that Republican policies hurt the vulnerable, and that the party’s rhetoric is often harmful to people who deserve charity and respect. I questioned the motives of pro-life activists who supported Republicans. How could someone who cares about children support the party that separates migrant children from their parents, traps so many children in poverty and refuses to enact gun control to protect them from school shooters?

But then I went to college, and I started to take my faith more seriously. When I joined campus ministry, I began to interact more frequently with pro-life people, and I was surprised to find that I liked many of them. At first, I regarded my new friends as good people with a big blind spot. But as time went on, I came to the conclusion that these students weren’t pro-life despite their kindness but because of it.

When I joined campus ministry, I began to interact far more frequently with pro-life people, and I was surprised to find that I liked many of them.

These students’ priorities extended beyond simply ending abortion. They pursued reconciliation and justice. I was impressed to see them seeking to establish common ground with pro-choice students by turning conversations to capital punishment. I was surprised to hear that they volunteer with charities that help pregnant women get the resources they need. I had not imagined that pro-lifers could be anything but sanctimonious or overzealous. But these students were neither. They were practical and kind.

While I wrestled with these realizations, I was also reading and listening to more Catholic media. I was surprised to find progressive political views in the same articles and podcasts that referred to abortion as a tragedy and a sin. I discovered that pro-lifers are often feminists, viewing abortion as one of society’s means of compelling women to behave more like men. I learned that many pro-lifers are even more outraged by poverty than I was because they recognize that an unjust economy so often pressures women into choosing abortion. I read about pro-lifeactivists who devote their lives to helping pregnant women so they will not feel forced into having an abortion.

I was not suddenly blind to the anti-abortion activists who advocate what I consider to be extreme policies or who employ deceptive political tactics. But I saw that the pro-lifers who don’t make headlines, the ones on the ground—they serve Christ’s mission in a way I only hoped I could. They demonstrate a true allegiance to all life, and, in their devotion to the vulnerable, serve as a model for how we can live in imitation of Christ today. My pro-choice beliefs, I realized, were neither as kind nor as thoughtful.

I saw that the pro-lifers who don’t make headlines, the ones on the ground—they serve Christ’s mission in a way I only hoped I could.

As a pro-choicer, I had always treated poverty as a given and assumed that abortion was sometimes the only response to the conditions of that poverty. Pro-lifers, however, inspired me with a vision of a world in which no mother is compelled to resent or fear a pregnancy because of its material cost or inconvenience.

As a pro-choicer, I had focused on the heart-wrenching reasons women give for choosing abortion: spousal abuse, an inability to provide for children, the unequal treatment of mothers in education and business. Pro-lifers, however, convinced me to strive to relieve women of those burdens in the first place by rectifying their root causes.

As a pro-choicer, I had committed money to campaigns and organizations that worked to make abortion more easily accessible. Pro-lifers showed me that my money could be spent not on death but on life, on helping the thousands of activists and volunteers who financially and emotionally support mothers.

As a pro-choicer, I would have been indignant at the assertion that if my objectives were realized, neither the tragedy of systemic poverty nor the injustice of our culture that punishes mothers would be solved. Pro-lifers helped me understand that abortion does not liberate poor mothers but merely hides their suffering.

I am proud to leave behind those inconsistencies and identify as pro-life.

And yet…my distaste for allegiance to the Republican Party by many in the pro-life movement remains, and I am sympathetic to people who cannot stomach the idea of associating themselves with them. I retain the hope, however, that the pro-life movement can face up to its challenges. I believe that the political aspects of pro-lifeism that I so dislike—the partisanship, the draconian laws, the hostile rhetoric—are not necessary to the movement but actually hinder it.

The true heart of the pro-life movement is not political but pastoral. In personal, individual ministry, pro-lifers have made their greatest accomplishments and their most persuasive arguments. In compassion and dedicated service, they live the Christian mission.