‘I was a child raising a child’: the cost of Latin American family separation—and the long journey to reunite 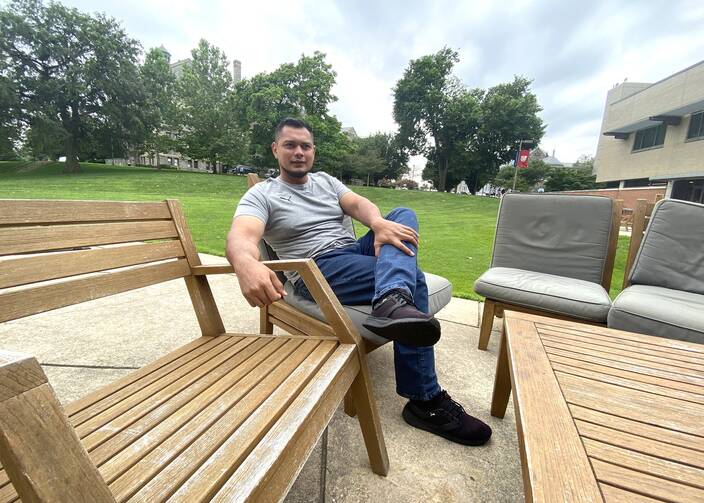 Jorge Alvarenga talks on the campus of The Catholic University in Washington July 26, 2022, about being separated from his mother for 17 years after she migrated to the U.S. from their native El Salvador. Thanks to a course on Catholic social doctrine he attended in Washington, she was able to travel from a nearby state to see him briefly after his classes ended. (CNS photo/Rhina Guidos)

WASHINGTON (CNS)—Jorge Alvarenga’s voice seemed to crack just a little when the 31-year-old began remembering and talking about the last time he saw his mother in El Salvador. He was 14. She was in her 20s. It was the middle of the night and she got into a car.

Though family separation at the U.S.-Mexico border has been a much-debated topic in recent years, children in Central America have long faced extended periods away from their migrant parents. For them, reunification with a parent can sometimes take years, if not decades, and sometimes not at all.

Though family separation at the U.S.-Mexico border has been a much-debated topic in recent years, children in Central America have long faced extended periods away from their migrant parents.

Unable to find a job in her profession as a teacher, or anything else for that matter, Alvarenga’s mother had slowly started preparing him and his 4-year-old sister for the possibility that she would leave.

“She could never land a stable job and she knocked on a lot of doors,” Alvarenga said in a July 26 interview with Catholic News Service. “She tried to become a vendor ... a lot of different things ... but the night before she left, she told us, ‘I need to get you ahead in life. If I stay here, we’re all going to starve.’”

His father had abandoned the family. Then, Alvarenga’s grandmother, elderly and sick, came to live with them. In over her head financially, his mother’s only way out seemed to be to borrow money to hire a smuggler and head north in search of a job. That’s how the smuggler ended up in front of their house as her young and devastated son watched her leave.

And that’s how Alvarenga and his sister became part of an untold number of children in Central America whose mother or father saw no other option but to head north, uncertain of when or whether they would see one another again.

Alvarenga and his sister became part of an untold number of children in Central America whose mother or father saw no other option but to head north, uncertain of when or whether they would see one another again.

“In this country, I think the majority of us (young Salvadorans) have lived that experience, of having a parent or both parents leave,” said Gabriela Rivas, a 29-year-old mother of two, in a 2021 interview in El Salvador with CNS.

Rivas was 13 when her mother left El Salvador. She hasn’t seen her face-to-face since then.

“She was forced to leave,” said Rivas, not wanting to go into details about the violence her mother suffered, only to say that she was kidnapped and saw no other choice but to get out of El Salvador.

“We don’t live in a safe country,” said Rivas, whose husband was detained and jailed early in 2022 during a controversial government crackdown. Like Alvarenga’s mother, Rivas is now the sole breadwinner, supporting two children with odd jobs, including cooking for the poor.

Rivas said she worries about the effects of family separation due to migration in her age cohort—not just what it does to people but also to society and the country.

“When a family disintegrates ... some of the children (left behind) run the risk of taking a bad path” because often, there’s little or no supervision, she said. “Some end up in jail (joining gangs) or dead. There are consequences, the disintegration of the family brings many bad consequences.”

Some like Rivas are left in the care of grandparents or another family member when a mother or father leave.

“We had the love of our grandparents, but it’s not the same as that of your mother,” she said.

Others like Alvarenga are left to step into a parental role.

“I matured really quick. I was practically a child raising a child,” Alvarenga said.

With no parent in the house, it was up to him to enroll his sister in school each year, attend parent-teacher meetings, care for his sick grandmother and administer the money his mother sent home.

“I always had a lot of responsibilities, but God is so great, everything turned out OK,” said Alvarenga, who with the money his mother sent was able to attend college, graduating with a degree in social work, guiding his sister to do well in school, too. She’s now close to graduating with a law degree.

“I matured really quick. I was practically a child raising a child,” Alvarenga said.

“My mother called every day, ‘Are you both home? Did you eat?’” she would ask in between her work shifts, Alvarenga said.

In video calls, she would show them something about her life in the U.S., often from small rooms she rented in basement apartments in the Northeast that allowed her to save money to send home, for school and to care for their grandmother.

After Alvarenga graduated from college and became a professional, eventually becoming director of Cáritas in northern El Salvador, he began saving money so he could get a visa to come to the U.S. to see his mother since her illegal immigration status prevented her from traveling.

But the visa was repeatedly denied.

Rivas said she, too, has wanted to see her mom but knew she would likely be turned down by U.S. officials at the embassy. She wasn’t going to risk her life migrating north illegally, especially with children depending on her, she said. But her brothers in their teens left.

Rivas said she, too, has wanted to see her mom but knew she would likely be turned down by U.S. officials at the embassy.

“They said they wanted to make up for lost time” with their mother, and one day went with a “coyote,” a smuggler, and left, she said.

It was describing a report from two of its scholars on how family reunification drives child migration from Latin America, adding that “U.S. immigration policies that restrict the ability of parents to visit home are all significant drivers.”

For Alvarenga, his mother’s sacrifice prevented him from leaving; instead, it drove him to study harder, to work harder and build the life she’d wanted for him.

His wish to see his mother again was granted recently. He saw her for the first time in 17 years, after his visa was finally granted so he could attend, as head of Cáritas, a training on Catholic social doctrine in Washington called the Catholic Leaders Academy. But the emotion led him and his mother to make the decision to postpone their meeting until after he was done with the course.

The visa, however, was for a limited amount of time and he was able to spend just five days with her.

Rivas said she has thought of leaving as her brothers did. But she has children to worry about as well as a husband whose fate is uncertain. All she really wants is to spend a little time with her mother and said she wished the U.S. would allow that.

“I’ve now spent half of my life without her,” she said. “I just want to talk, hug her ... there are things you can’t say over the phone.”