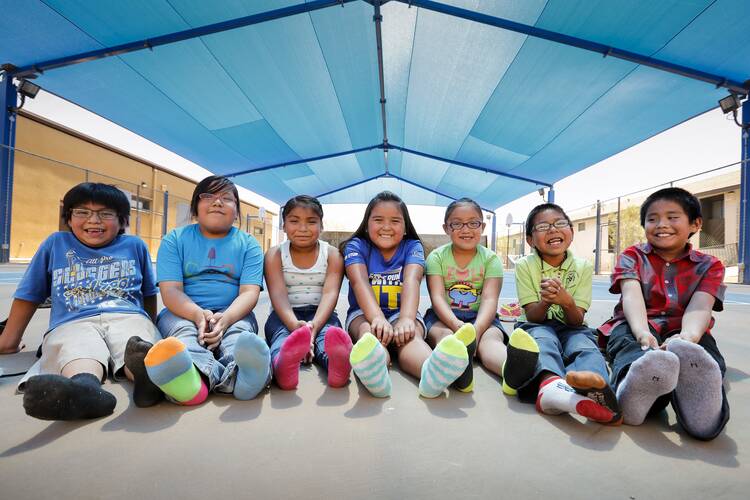 These and countless other examples demonstrate a simple truth: A Catholic school that serves only the rich is not a Catholic school at all. From the very beginning of Catholic education in the United States, schools have served immigrants and the marginalized communities—Catholic or not. That mission is part of the very identity of a Catholic school.

The recent expansion of Arizona’s school voucher program will make it easier for Catholic schools there to fulfill their mission. In July, Gov. Doug Ducey, a graduate of St. John’s Jesuit High School in Toledo, Ohio, signed the expansion of the Empowerment Scholarship Account program into law. Starting in September, all Arizona students will be eligible for vouchers—approximately $6,500 each for students in grades 1 to 12 and $4,000 for kindergarten students.

Arizona will become the 17th state, along with the District of Columbia and Puerto Rico, to have a voucher program. Earlier this year, the Supreme Court ruled that Maine could not exclude religious schools from a tuition assistance program for private schools. In 2020, the court issued a similar ruling in Montana. “A state need not subsidize private education,” Chief Justice John G. Roberts wrote for the majority. “But once a state decides to do so, it cannot disqualify some private schools solely because they are religious.”

The expanded voucher program will make it possible for more low- and middle-income families to send their children to private school. The day before the expansion passed the legislature, state lawmakers increased total funding for K-12 education by $1 billion to serve Arizona’s 1.1 million students, a step some saw as appeasing legislators unsure of the program.

Ironically, the Grand Canyon State is one of 37 that still have so-called Blaine amendments, which prevent private schools from receiving public funds, and which America’s editors have opposed throughout our history. In the late 19th century and early 20th century, following the failure of Republican congressman James Blaine to pass a U.S. constitutional amendment to prevent public funds from going to private schools, states passed amendments of their own to do so.

The Blaine amendments were part of the nativist movement, which led to mob violence against Catholics and the destruction of Catholic property. Blaine amendments still exist, and they are anti-Catholic, as the Supreme Court majority correctly recognized in 2000 and 2020. They should be repealed. They point to the perduring xenophobia and the prevailing myth that pits Catholic and public education against each other in a fight for tax dollars. This is a false dichotomy. State governments can adequately fund both private and public schools.

Both private and public schools work toward the common good of American society.

We must also move past the tired arguments that vouchers for private schools violate the establishment clause of the First Amendment. States with school voucher programs are not endorsing any religion, but instead choose to support them because they recognize how private schools complement the work of public education.

Both private and public schools work toward the common good of American society. Cristo Rey and Nativity Schools are shining examples of what Catholic education can do for lower-income students, even when no public funding for tuition is available. These Catholic schools open their doors at the intersection of the church and the world.

“In an age awash in information, often transmitted without wisdom or critical sense, the task of forming present and future generations of Catholic teachers and students remains as important as ever,” Pope Francis observed earlier this year. “Catholic education is also evangelization: bearing witness to the joy of the Gospel and its power to renew our communities and provide hope and strength in facing wisely the challenges of the present time.”

It should come as no surprise that Pope Francis speaks so highly of Catholic schools, as they are primary promoters of a culture of encounter. Catholic schools emphasize serving others and recognizing the human dignity of all. Many of them have service-hour requirements for older students and facilitate class projects to help people in need. Additionally, around 20 percent of students in Catholic schools across the nation are not Catholic.

It should come as no surprise that Pope Francis speaks so highly of Catholic schools, as they are primary promoters of a culture of encounter.

Georgetown’s Center for Applied Research in the Apostolate listed the quality of religious education, academic instruction, discipline and “community” among parents’ primary motivations for choosing Catholic education. Catholic high schools have a track record of higher graduation rates than public schools, and Catholic students tend to perform well in college.

Still, despite these benefits, Catholic school enrollment has been steadily declining since 1960, the year it peaked at 5.2 million. While dioceses in the western United States continue to build new schools, according to the National Catholic Education Association, Catholic school enrollment nationwide in 2022 hovered under 1.7 million. This total represented an increase of 3.8 percent over the prior school year, the first increase in two decades, but it remains to be seen whether this was a pandemic-related blip or the beginning of a turnaround.

Our hope is that Catholic education, which has proven time and again that it can form lifelong contributors to American society, is becoming a viable choice for more families. To meet this moment, Catholic schools must renew their commitment to serving immigrant and marginalized communities. In addition to advocating for well-funded public schools, Catholic school communities must reach out and support low-income families who may not otherwise consider a private education to be within reach. Such efforts must include financial support to address prohibitive tuition. The culture of encounter already present in our schools must spread throughout our parish families.

Some policy makers may see a private education as a signifier of upper class society. But the religious liberty Catholic schools so desperately seek is, in fact, the freedom to serve those who would otherwise be unable to afford private school tuition. Through state initiatives like Arizona’s new school program, more parents can have a real choice about where to send their children each new morning. Other states would do well to follow that lead.