‘Are we stuck in this hell forever?’ And other questions I’m asking after another mass shooting 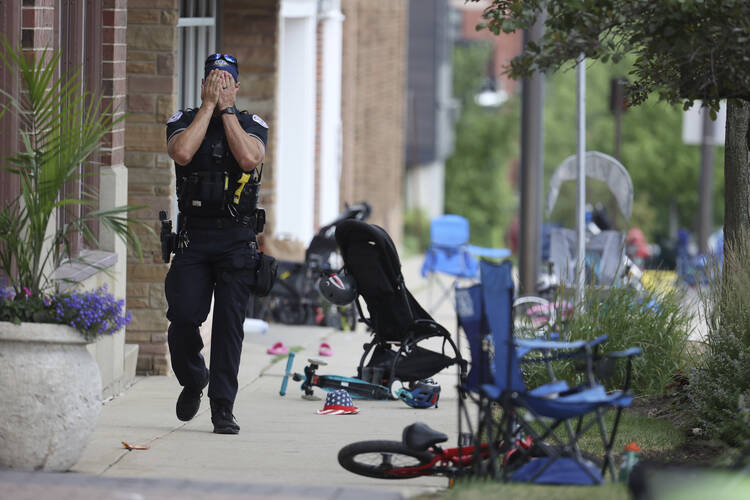 I grew up in the Northwest suburbs of Chicago, maybe 20 minutes from Highland Park. It’s not a place where guns are a normal part of culture or society. In fact, in my whole life, I have never seen one. And I think that’s true for most people there.

This is the point where I tell you how shocked and upset I was to hear about the mass shooting that happened in Highland Park on July 4, just how much it broke me to hear my 75-year-old mother say to me, “It just feels like you’re not safe to go anywhere any more.” But you’ve already read that story a hundred other times, haven’t you?

I could also share lots of other upsetting data,like the fact that 68 other people were shot in Chicago over the weekend. Eight of them died. Or that there were 14 other mass shootings across the country that weekend or that there have been more than 300 already in 2022. But truly does any of that really surprise you at this point?

Dante’s great insight in “Inferno”is that ultimately the only way out of hell is going through it, by confronting what we see there and what we feel.

I could offer an interview with activists working to change the gun laws, constitutional scholars with insight into interpretations of the Second Amendment or mass shooting survivors who could describe how that experience has impacted them. Or I could point to other articles I have found insightful, like this piece by America’s editor in chief Matt Malone, S.J., written in the wake of the shooting at Robb Elementary School in Uvalde, Tex., that killed 19 children and two teachers.

But to what end? There are no startling new insights to be gathered at this point, no fresh takes. All over the country, every day, people are being shot and killed. And no matter how much sadness and outrage are generated, how many marches are organized, how many speeches are given from the floor of the House or the Senate, or how many pages are spent writing about it all, it just keeps happening. But even futility has become a tired angle on our situation. We have literally heard it all. I am exhausted at the very idea of reading (and writing) another story about being exhausted.

It’s like we are living in a Samuel Beckett play. The only real question is: Is this Purgatory and change will actually some day happen? Or are we stuck in this hell forever?

Probably the most famous image from the Italian poet Dante Aligheri’s own imagined trip through Hell in “The Divine Comedy” is the sign he discovers at its entrance: “All hope abandon, ye who enter here.” Yet Dante’s great insight in “Inferno”is that ultimately the only way out of hell is going through it, by confronting what we see there and what we feel.

One thing I believe is that God is waiting for us in that darkness, equally outraged, exhausted and filled with grief. And in choosing to sit and mourn with him, we are all less alone.

There is something Ignatian in that, too. For St. Ignatius, big feelings were always something to run toward, not away from. Scary though they may seem, rage and despair were lighthouses just as much as joy or wonder.

But what could they possibly cast into relief at this point, beyond the absolute desolation of our political process? What good could possibly come from trying to stay in the endless, battering horror of this moment, to stay with these feelings in prayer, to read another story or write another letter?

I guess it is possible that we may grow in our capacity to accept the burden that lies upon us all. Perhaps the misery of it all cracks us open and helps us to love more generously. Maybe this really is a purgatory pushing us toward some kind of conversion.

One thing I believe is that God is waiting for us in that darkness, equally outraged, exhausted and filled with grief. And in choosing to sit and mourn with him, we are all less alone.