We called for gun control after MLK and RFK’s assassinations in 1968. We could have written the same editorial today. 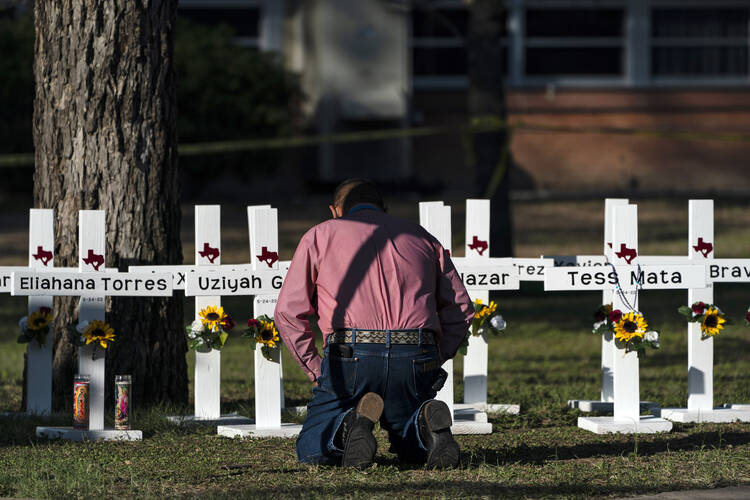 Pastor Daniel Myers kneels in front of crosses bearing the names of Tuesday's shooting victims while praying for them at Robb Elementary School in Uvalde, Texas, Thursday, May 26, 2022. (AP Photo/Jae C. Hong)

On May 24, a deranged young man stormed Robb Elementary School in Uvalde, Tex., and shot and killed 19 children and two teachers. It was the deadliest school shooting since the murders at Sandy Hook Elementary School in Connecticut in 2012. Officials said the gunman also shot his grandmother in the face and left her wounded in her home before driving a pickup truck at a high speed and crashing it through a barrier outside the school. The 18-year-old suspect was killed by law enforcement officers.

My tenure as editor in chief of America is now bookmarked by the two deadliest mass shootings of children in American history. The carnage at Sandy Hook Elementary School occurred during the first six months of my tenure. The slaughter in Uvalde has occurred just a few months before my tenure ends. In the decade between these gruesome milestones, America reported or commented on mass shootings in the United States approximately 171 times, or about once per month.

As distressing and dispiriting as that statistic is, however, that decade of news and commentary is but one-fifth of the number of years America has been addressing the epidemic of gun violence. In the wake of the assassinations of the Rev. Martin Luther King Jr. and U.S. Senator Robert F. Kennedy in the spring of 1968, the magazine published the following editorial:

This journal has consistently and unequivocally backed attempts to pass strong gun control legislation, but to no avail. What more can be said? How many more assassinations will it take? Now that the third national leader has been shot, perhaps the incredible congressional indifference will end. Whenever we have commented on this matter, we have received cancellations and angry letters. Undoubtedly these will continue. Equally undoubted is the opposition to any effective bill by the powerful gun lobby, led by the National Rifle Association.

That was 54 years ago, yet America could have published that same editorial—word for word—in the last 24 hours.

In the decade between Sandy Hook and Robb Elementary, America reported or commented on mass shootings approximately 171 times, or about once per month.

What follows is a summary of America’s more recent commentary on gun violence, which we publish here not as some form of “we told you so”—that would be egregiously and sinfully self-righteous—but as a cri de cœur, a lament that would have been well-known to the author of the 13th Psalm:

In the wake of the events at Sandy Hook in 2012, America published its boldest editorial to date regarding gun violence. The editors called attention to Justice Antonin Scalia’s argument in a landmark U.S. Supreme Court decision in 2008, which struck down Washington, D.C.’s local gun control law: The Second Amendment, Justice Scalia wrote, “necessarily takes certain policy choices off the table.” America’s editors agreed with Justice Scalia and accordingly called for the repeal of the Second Amendment:

Americans must ask: Is it prudent to retain a constitutionally guaranteed right to bear arms when it compels our judges to strike down reasonable, popularly supported gun regulations? Is it moral to inhibit in this way the power of the country’s elected representatives to provide for the public safety? Does the threat of tyranny, a legitimate 18th-century concern but an increasingly remote, fanciful possibility in the contemporary United States, trump the grisly, daily reality of gun violence? The answer to each of these questions is no. It is time to face reality. If the American people are to confront this scourge in any meaningful way, then they must change. The Constitution must change.

In calling for the repeal of the Second Amendment, the editors were careful to note that the post-repeal world they envisioned did not require an absolute ban on all firearms. This was also an echo of what America had argued in 1968, when the editors wrote:

We have never denied that the ownership and use of firearms for sport by competent people is a worthy freedom. But no intelligent hunter or collector wants firearms to circulate freely in the hands of psychopaths and criminals. Licenses, registrations and the policing of gun sales are inconveniences necessary to protect an even more basic freedom, that of life itself.

“The Second Amendment did not come down from Sinai,” Cardinal Blase Cupich argued in America after the events in Uvalde, Tex. The editors of America had endorsed a similar view in the editorial calling for the repeal of the Second Amendment:

In the national imagination, the Constitution is too often thought of as a kind of sacred text. Yet neither our founders nor our forebears held to that view. The Constitution is mere human law. It is excellent law, but it is not divine law; it is not revelation. We should be wary of amending the Bill of Rights. We should also be wary of idolizing it. The Constitution is the man-made law of a self-governing people; the people, therefore, are entitled to ask basic, critical questions about it. In our time, is a given constitutional provision a good law or a bad law? Does it promote the common good? The secular dogma of constitutional immutability must yield to careful, critical inquiry.

After the massacre of students at Stoneman Douglas High School in 2018, the editors warned again of “the growing normalcy of school shootings,” at the same time expressing the collective frustration of many of America’s readers. While continuing to press for repeal of the Second Amendment (a cause that has garnered increasing support, even among some conservatives), the editors also pressed for crucial interim measures that could save lives:

It is exhausting to return to the same arguments about gun control as the bodies pile up, especially as Second Amendment absolutists propose increasingly preposterous responses to school shootings. Apparently, just about everything contributes to gun mayhem in the United States—video games, peer bullying, A.D.H.D. medicine—but not the 300 million guns themselves. The worst is the creeping normalcy of it all as the nation grows incapable of shock, inured to the suffering inflicted on families and communities. This publication has called for repeal of the Second Amendment. In the meantime, we insist on the well-regulated militia described in the Constitution. Comprehensive gun registration and commonsense gun sale policies; a ban on bump stocks and military-grade weapons; and mandatory safety instruction, proof of safe storage and liability insurance are good steps to getting there.

Such commonsense laws and regulations could also help address a related phenomenon that is often overlooked in our debates about gun violence. America’s editors have drawn attention to the fact that 60 percent of the people who die from gun violence in the United States are not victims of mass shootings but people (mostly men) who kill themselves. The editors asked in an editorial in 2017 whether paying better attention to that grim statistic might be a more effective way of persuading a larger number of people to embrace tighter gun safety and control measures:

If repeal of the Second Amendment is politically unattainable, can anything be done to reduce the unreasonably large number of guns in our homes? The most significant consequence of unfettered gun ownership is not our shameful history of mass shootings: It is suicide. While the following comparison is in no way meant to diminish the enormity of [the tragic mass shooting in Las Vegas in 2017], on a typical day in the United States, the same number of people die from self-inflicted gunshot wounds, according to the Centers for Disease Control. To phrase that another way, the epidemic of gun suicide is killing Americans at the rate of one Las Vegas attack every single day.

Lastly, America’s editors have been mindful of the need to have hope in the face of despair and of the Christian obligation to bear witness to that hope. While just as exhausted, saddened and angered as the rest of the church and country by the nation’s failure to address the scourge of gun violence, America has also called attention to the resources in our spiritual tradition that can ward off cynicism and inspire action. The editors wrote in 2018:

The Christian tradition gives us powerful symbols with which to enter into the Lenten season of penance and reflection on sin and death. This year, an ancient symbol saw its significance magnified all the more on a tragic Ash Wednesday. The news media on Feb. 14 carried numerous images of distraught parents outside a school in Parkland, Fla., many with ashes still on their foreheads, as they waited to hear if their children were alive or dead after yet another mass shooting. The images could have come straight from Scripture: parents marked by signs of penitence and sorrow, lamenting the suffering of their children, anxious for good news and fearing the worst. As we move through the final weeks of Lent and await the coming of Easter, their suffering is a poignant reminder to the rest of us of our need for hope and for resurrection into new life. And the courageous witness of the student-survivors in their fight for gun safety is a reminder of the need for action in this life.