Your Take: The abortion debate continues 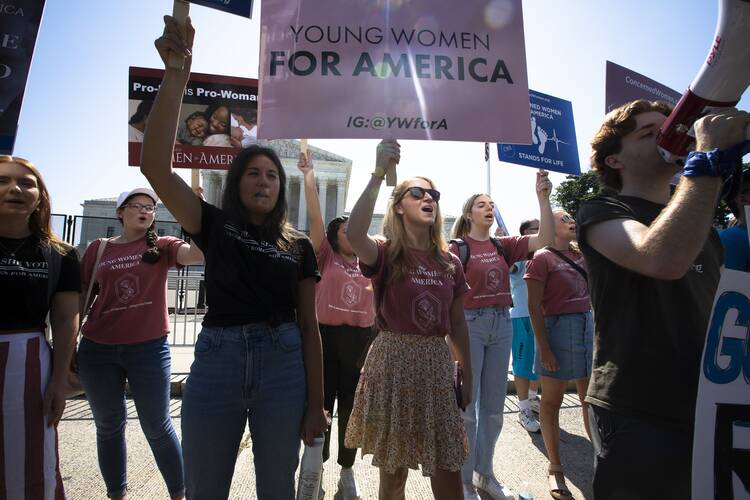 In the editorial for the June 2022 issue (“Roe v. Wade: an End and a Beginning”), America’s editors welcomed the U.S. Supreme Court’s draft decision for Dobbs v. Jackson Women’s Health Organization. If an overturning of Roe v. Wade is formally adopted as the court’s opinion, the editors wrote, then this decision would remove some of the animus from national politics by leaving debate about such a sensitive issue in the hands of elected representatives rather than unelected judges. They warned, however, that pro-life advocates ought not to enact laws that attempt to define the personhood of an unborn child; doing so “would be the mirror image of Roe’s fundamental error,” exacerbating an already fraught issue. America’s readers had much to say in response and often disagreed with the magazine’s position.

Nothing is said here about rape or incest. Or of someone who takes advantage of a mentally challenged person. Or of miscarriages. This ruling will discourage women from seeking prenatal care because they won’t want to make their pregnancy official.

We talk a good game about providing social safety nets. But the very people who use that reasoning are the ones who voted against Obamacare, food programs or even free cell phones so they can access emergency services.
Donna Maurillo

It would be so good if we didn’t try to force women to have children, then abandon them once their children have been born, but instead make it easier for them to afford the costs of having their children and raising them. Experience in more socially progressive countries seems to show that many pregnant women would choose life for their children if they thought they could give those children lives of dignity.
Marilyn Martin

Unfortunately, our society is the victim of unbridled individualism, which since the Enlightenment has gradually replaced a Christian worldview. I am human only in relation to other humans. I do not have individual “rights” that cancel out the fundamental right to life. Until we see a philosophical shift that embraces the Christian concept of the value of the human person as the highest value, women will go on fighting for “my body, my right.”
Teresita Scully

While I do not support abortions, the end result of overturning Roe v. Wade is that wealthy people will still get abortions and poor people will not. People without wealth will carry to term or die getting an illegal abortion. I am tired and frustrated at all the “easy” answers and the platitudes from people on such a complex issue.
Stephen Healy

Human life begins at conception. That is science, not religion. Personhood, however, is more debatable. But following science, once a fetus is viable and therefore able to survive on its own outside the womb, it must be recognized as a human being with rights of its own. Arguing that a woman has the right to terminate the life of a viable, unborn baby at her discretion because it is within her body is a morally repugnant argument.
James Carney

What else does America want to leave up to the states: the Americans With Disabilities Act? The Clean Air Act?
Cheryl Ashe

Ending Roe v. Wade will not bring true justice until the pro-choice and anti-abortion groups come off their “all or nothing” attitudes and listen to their opponents. Nothing will change until public leaders work to build a consensus on the issue rather than continuing a “my way or the highway” rhetoric.
Glenn Barnette

I continue to pray that we can learn to live in a country where the dignity of everyone is respected and justice is for all (not just for those who have the best attorneys). The last sentence of your article afforded dignity to the unborn but it left out mentioning women’s dignity (only justice was required there). Was that a Freudian slip? You have me wondering what you believe justice to be for women.
Christine Gall