Podcast: Cornell Brooks, former head of the NAACP, on the church and justice for Black lives 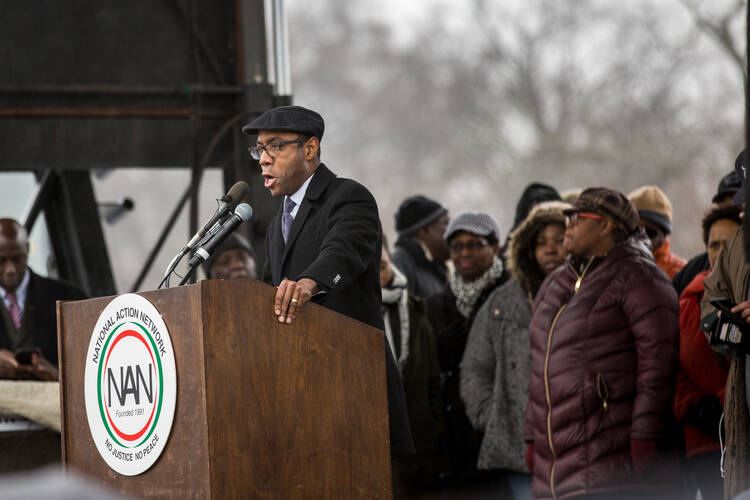 Cornell William Brooks at the We Shall Not Be Moved Rally, Washington, D.C., in January 2017 (Photo credit: Lorie Shaull/Flickr)

When it comes to social justice issues “the church can show up as moral first responders or as funeral directors,” says Cornell Brooks.

Professor Brooks joins “The Gloria Purvis Podcast” with an impressive pedigree as the former president and chief executive officer of the National Association for the Advancement of Colored People, a civil rights attorney, a professor of public leadership and social justice at the Harvard Kennedy School, and an ordained minister in the African Methodist Episcopal church.

“You are more likely to see the Easter bunny standing next to Santa Claus at the voting booth than to encounter an actual instance of voter fraud,” Professor Brooks says. In reality, it is politicians who are committing the overwhelming amount of voter fraud, not the citizens whose voting rights are being suppressed.

At the top of the show, Gloria also speaks about the recent Supreme Court ruling overturning Roe v. Wade, noting that “there’s never been a time in the country where Black women have not struggled with pregnancy and parenting, and yet we still gave birth and rear children in the most dire circumstances. And I’m hoping that maybe now with Roe gone, we can focus on actually supporting Black women.”

Gloria has also taken up the question of abortion in these recent episodes: