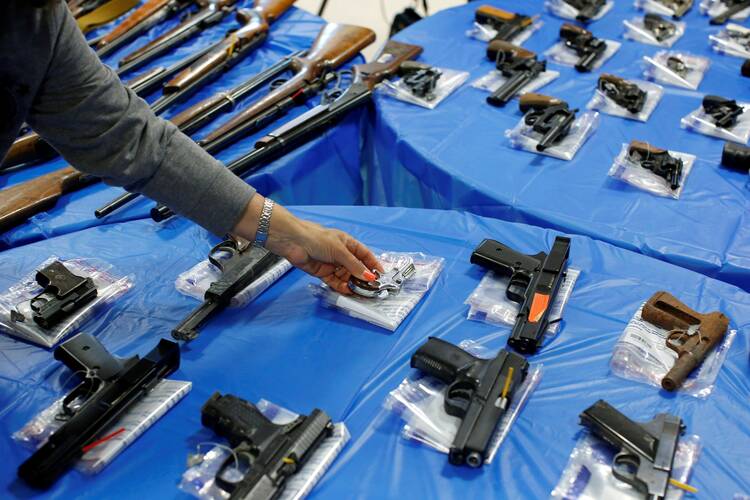 Catholic leaders are expressing optimism that a framework agreed to by a bipartisan group of U.S. senators could lead to new laws aimed at reducing gun violence.

“I am deeply grateful that members of Congress have undertaken bipartisan negotiations to address the plague of gun violence in our nation,” Archbishop Paul S. Coakley, who heads the domestic justice and human development committee for the U.S. Conference of Catholic Bishops, said in a statement on June 14. “I commend their recent announcement of a framework to help prevent senseless violence, which includes reasonable gun safety measures.”

The archbishop said that engaging in dialogue aimed at strengthening the common good is “an example of the ‘better kind of politics’ that Pope Francis champions.” He urged Congress “to continue these important efforts which will help build a culture of life. It is imperative this Congress passes into law new protections for the American people.”

“I am deeply grateful that members of Congress have undertaken bipartisan negotiations to address the plague of gun violence in our nation,” Archbishop Paul S. Coakley said.

On Sunday, a group of 20 senators announced that they had reached a consensus on a framework that could be used to pass rare legislation aimed at stemming gun violence. While supporters of stricter gun control measures say the framework does not go far enough, some praised the compromise as a good first step.

The head of the Catholic Health Association sent a letter to senators on Wednesday, urging them “to move quickly and approve legislation to address the distressing surge in gun violence affecting our nation.”

The president and C.E.O. of the Catholic Health Association, Mary Haddad, R.S.M., called gun violence in the United States “a profound health, economic and moral crisis.” Sister Haddad laid out a number of items that C.H.A., which represents more than 2,200 Catholic hospitals, clinics and long-term care facilities, have supported in an effort to reduce gun violence. Those include expanded background checks, increased federal funding to study gun violence and banning assault weapons and high-capacity magazines.

In her letter, Sister Haddad notes that the proposed framework addresses some of the goals supported by C.H.A., such as a grant program to encourage states to enact “red flag” laws, increased financial support for mental health programs and school security measures.

“While we strongly encourage you to continue developing strong legislative proposals to address this issue, we do welcome these initial steps and urge you to move as quickly as possible to approve legislation that can gain the necessary support in the Senate,” Sister Haddad wrote.

Earlier this month, four bishops who chair various U.S.C.C.B. subcommittees sent a letter to lawmakers urging them to take action on guns in the wake of several recent mass shootings throughout the United States. Additional high-ranking Catholic leaders, including Pope Francis, Cardinal Blase Cupich of Chicago and Cardinal Joseph Tobin of Newark, have also been vocal in calling for stricter gun laws in the United States.

[Read next: Cardinal Cupich: The Second Amendment did not come down from Sinai]