Cardinal Cupich: The Second Amendment did not come down from Sinai 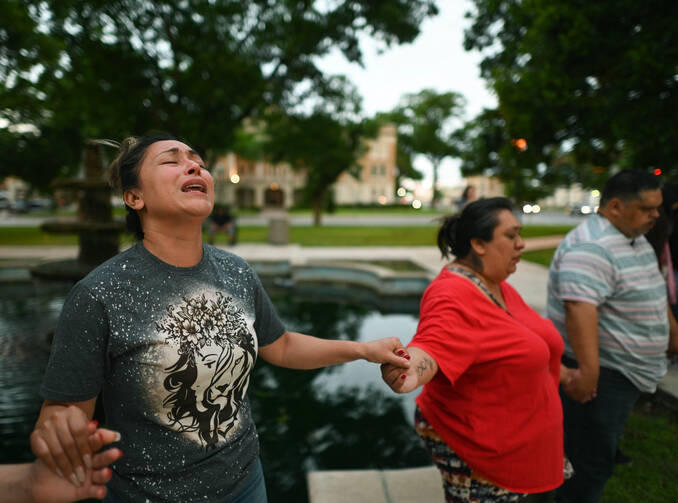 Kladys Castellón prays during a vigil for the victims of a mass shooting at Robb Elementary School in Uvalde, Texas, on Tuesday, May 24, 2022. (Billy Calzada/The San Antonio Express-News via AP)

On May 24, a gunman stormed into an elementary school in Uvalde, Tex., and slaughtered at least 19 children and two teachers. The shooter allegedly shot his grandmother before driving to the school. The 18-year-old suspect was killed by police.

The parents of the school were told: “Please do not pick up students at this time. Students need to be accounted for before they are released to your care.” Imagine being a parent with a child in that school. Imagine having to bury them.

Such was the extent of the damage done to these children’s bodies by the killer’s weapons that parents faced a delay in identifying the victims.

Imagine being a parent with a child in that school. Imagine having to bury them.

The National Rifle Association will hold its annual meeting on Friday, May 27, in Houston, about 300 miles east of the massacre. Less than a year ago, the governor of Texas signed into law a bill that allows people without license or training to carry handguns.

We do not yet know whether the Uvalde gunman took advantage of “permitless carry,” but we do know that America is awash in guns. We have more firearms than people in this country.

Mass shootings have become a near-daily reality in America today. Two people died and seven were injured last week during a mass shooting just down the street from Chicago’s Holy Name Cathedral. Last weekend in Chicago, 28 people were shot.

As I reflect on this latest American massacre, I keep returning to the questions: Who are we as a nation if we do not act to protect our children?

The size of the crisis and its sheer horror make it all too easy to toss up one’s hands and declare: Nothing can be done. But that is the counsel of despair, and we are a people of hope. What do we hope for our children?

Do we hope that as a regular feature of their schooling, they learn how to behave should a shooter attack? That they feel endangered by simply doing what society says is good for them—going to school? That they come to wonder whether they even have futures at all?

This week, our airwaves will be filled with pundits who offer predictable lamentations and warnings and tut-tuts and thoughts and prayers. And we must pray—for the victims, their loved ones, for the parents who are now afraid to send their kids off to school.

We must weep and soak in the grief that comes with the knowledge that these children of God were cut down by a man who was just a few years their senior.

The Second Amendment did not come down from Sinai. The right to bear arms will never be more important than human life. Our children have rights, too.

But then we must steel ourselves to act in the face of what seems like insurmountable despair.

We know that gun safety measures make a difference. A 2021 Northwestern Medicine study found that the Federal Assault Weapons Ban prevented 10 mass shootings during the 10 years it was in effect.

Researchers also determined that if the ban had remained in place in the years since it was allowed to expire, it could have prevented another 30 public mass shootings that killed 339 people and injured 1,139 more.

As I reflect on this latest American massacre, I keep returning to the questions: Who are we as a nation if we do not act to protect our children? What do we love more: our instruments of death or our future?

The Second Amendment did not come down from Sinai. The right to bear arms will never be more important than human life. Our children have rights, too. And our elected officials have a moral duty to protect them.

This article is adapted from a statement by Cardinal Cupich originally published on the website for the Archdiocese of Chicago.

Blase J. Cupich Cardinal Blase J. Cupich, archbishop of Chicago, is the Catholic co-chair of the National Catholic-Muslim Dialogue, sponsored by the Committee on Ecumenical and Interreligious Affairs of the U.S. Conference of Catholic Bishops.
Show Comments ()
Join the conversation: Login or create an account
Before you can comment, you need to update your profile to include your first and last name, as required in our comments policy. Then reload this page and you'll be set up for commenting. Update your profile