Anti-abortion activists, accustomed to small wins, are ready for a big one 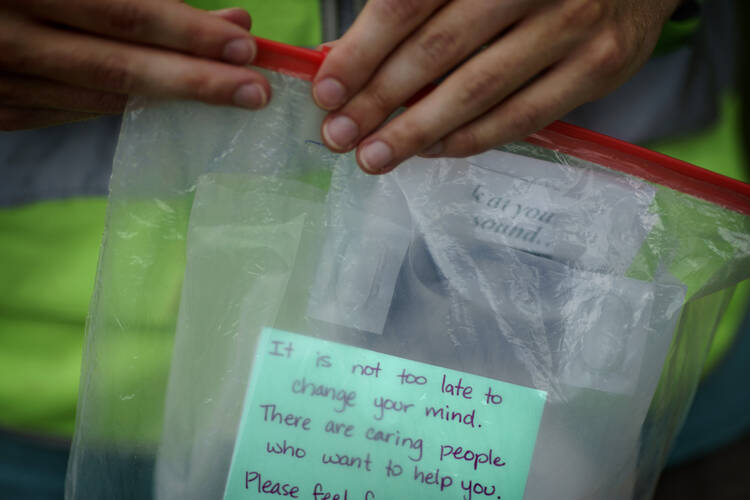 A member of the anti-abortion group, A Moment of Hope, holds a gift bag they try to hand out to patients arriving for abortion appointments at a Planned Parenthood clinic, Friday, May 27, 2022, in Columbia, S.C.  (AP Photo/David Goldman)

COLUMBIA, S.C. (AP) — For tens of millions of Americans who see abortion as wrong, it’s gone this way for a half-century: One woman swayed to reconsider as dozens of others follow through. One clinic’s doors closed only to see desperate patients go elsewhere. One law passed, another overturned.

A movement built of tiny steps and endless setbacks, though, now seems poised for a massive leap, with the Supreme Court weighing undoing the constitutional right to abortion found in Roe v. Wade.

“Folks are more hopeful now than we have ever been,” says Mark Baumgartner, the 53-year-old founder of A Moment of Hope, an anti-abortion organization whose workers and volunteers stand outside the Planned Parenthood clinic here every minute it’s open. They try to engage women in conversation, talk them out of an abortion if they’re considering one, and offer support if they decide to go through with their pregnancy.

A majority of Americans backs abortion rights, and one of the clinic’s rainbow-vested workers, 45-year-old Allison Terracio, believes the anti-abortion group’s sidewalk coterie uses trickery, empty promises and manipulation in the guise of kindness to sway women from something they’ve already carefully thought through. She says those due in to take an abortion pill or undergo a brief surgery have already thought through what they wanted and nothing Baumgartner and his crew can offer will change the circumstances of the prospective mother’s life.

“I’m not in the business of convincing anybody of anything,” Terracio says.

"Folks are more hopeful now than we have ever been."

On this day, the first of A Moment of Hope’s crew arrives before the sun even rises and, for hours, they haven’t had much luck changing minds. But now, a patient pushes out of the center’s doors and heads straight into the arms of an anti-abortion counselor who, a short while earlier, asked her not to do what she came here for.

The patient walks away with the counselor, and every eye on the block seems to follow. The circle of praying Catholics, the smattering of evangelicals at every clinic driveway, even the lone protester here, Steven Lefemine, all seem riveted by the apparent change of heart.

Talk to someone who’s been immersed in opposing abortion long enough and they’ll tell you the disbelief they felt when news of Roe broke in 1973 and the naïve certainty they had that it would be overturned in a couple of years. They’ll tell you about the politicians who collected their votes and never delivered, and the judges seen as allies who went on to disappoint. They’ll tell you how the issue ended friendships or landed them in handcuffs or brought them heartache again and again and again.

And yet, here they are, all these years later, in the fight so long some have grandchildren at their side.

Along the way, the image of an abortion opponent cemented in some Americans’ minds became a rabid protester shouting condemnation and clutching a gory sign, who would do anything to advance their cause.

Baumgartner knows the caricature many have of anti-abortion figures like him. He shudders when noisy protesters show up. He knows a woman arriving here may see everyone on the street the same, but if he could just have her ear for a moment, he thinks he can convince her.

"They're expecting to get yelled at that they're going to hell. We're here to be different."

“They’re expecting to get yelled at that they’re going to hell,” says Baumgartner, who left behind his job as a pilot to create the organization. “We’re here to be different.”

When he started his organization in 2012, the first woman he approached changed her mind, giving birth to a little girl whose picture hangs beside his office desk. It became the first of what the group regards as a “save,” when someone they’ve interacted with who planned to have an abortion changes their mind.

Last year, they estimate about 1,600 women had an abortion at the clinic. They logged 66 saves.

This day, once the woman that exited the clinic went to A Moment of Hope’s idling RV to talk with one of its counselors, she tells of a tough upbringing in foster care, an abusive partner who’s now out of the picture, the struggles of raising a 3-year-old, the problems with money, all the things that seemed impossible even before her period failed to arrive and morning sickness started sapping her will.

And, in the end, she went through with the abortion she came here for.

For those who’ve been immersed in the long fight against abortion, there have been many days like this one, with disappointments and setbacks. But they’ll return when the clinic reopens. They’ll return even if Roe falls. Many expect the fight to continue to their grave.

They’ve never felt more hopeful. A change, they are sure, is coming.

Matt Sedensky - Associated Press
Show Comments ()
Join the conversation: Login or create an account
Before you can comment, you need to update your profile to include your first and last name, as required in our comments policy. Then reload this page and you'll be set up for commenting. Update your profile