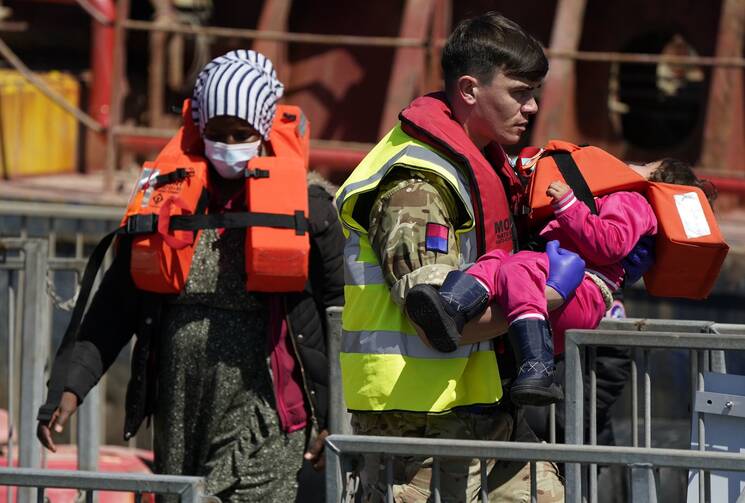 A soldier carries a child from among a group of people believed to be migrants to shore in Dover, England, after a small boat incident in the Channel, on June 14, 2022. (Andrew Matthews/PA via AP)

A controversial plan to deport asylum seekers in the United Kingdom to the East African Republic of Rwanda was grounded last night after the European Court of Human Rights intervened, ruling that the proposed deportation carried “a real risk of irreversible harm."

The decision to scrap the deportation flight scheduled for the evening of June 14 capped three days of frantic court challenges from immigrant rights lawyers who launched a flurry of case-by-case appeals seeking to block the deportation of everyone on the government’s list.

British government officials had said earlier in the day that the plane would take off no matter how many people were on board. But after the appeals, no passengers remained. British media reported that the number of potential deportees had been more than 30 on June 10.

After the flight was canceled, Home Secretary Priti Patel said she was disappointed but would not be “deterred from doing the right thing.” She added: “Our legal team are reviewing every decision made on this flight and preparation for the next flight begins now.”

Prime Minister Boris Johnson has emphatically defended Britain’s plan, arguing that it is a legitimate way to protect lives and thwart the criminal gangs that smuggle migrants across the English Channel in small boats. Britain in recent years has seen an illegal influx of migrants from such places as Syria, Afghanistan, Iran, Sudan, Iraq and Yemen.

Migrant advocates have attacked the policy as inhumane and illegal since Mr. Johnson first proposed it in April. The Johnson government argues that deportation to Rwanda would deter asylum seekers from supporting illegal human smuggling networks and risking their lives by crossing the English Channel in the often dangerously unsuitable inflatables used by human traffickers.

Bishop Paul McAleenan: “Migration is a complex issue, but it is not resolved by delegating our roles and responsibilities to other countries.”

British officials said deportations would be limited to single men who entered the United Kingdom through unauthorized routes like the channel passage or as stowaways on trucks moving goods into Great Britain from the continent. Most of the asylum seekers likely to be initially deported come from Syria and Iraq.

The plan has been deplored by Catholic church leaders in the United Kingdom. In a statement released on June 14, Bishop Paul McAleenan, Lead Bishop for Migration Issues for the Catholic Church in England and Wales, said: “Migration is a complex issue, but it is not resolved by delegating our roles and responsibilities to other countries.

“Our Christian faith demands that we respond generously to asylum seekers whose dignity must be protected and upheld,” he said. According to Bishop McAleenan, the forcible deportation of asylum seekers “is shamefully illustrative of what Pope Francis has called the ‘loss of that sense of responsibility for our brothers and sisters on which every civil society is based.’”

The Most Reverend William Nolan, archbishop of Glasgow, called the controversial policy “morally wrong” in a comment on Twitter on June 11. “It is an offense against human dignity and against all the best traditions of welcome of this country,” he added.

Under a deal announced last month, Britain plans to send migrants who use unauthorized routes into the United Kingdom on one-way trips to Rwanda, where their claims will be processed. If those claims are accepted, asylum seekers would be resettled in Rwanda, not the United Kingdom. Rwanda officials tod CNN that British authorities had agreed to support resettled migrants until they achieve self-sufficiency in Rwanda.

Archbishop William Nolan: “It is an offense against human dignity and against all the best traditions of welcome of this country.”

The British government is seeking to distinguish between refugees who arrive by approved routes, such as programs to help people fleeing Afghanistan or Ukraine, and those it says arrive by illegal routes run by smugglers, especially across the English Channel.

More than 28,000 migrants entered the United Kingdom across the Channel last year, up from 8,500 in 2020. Dozens have died, including 27 people killed after one boat capsized in November.

Bishop McAleenan challenged the government’s assertion that the proposal will deter human traffickers, arguing instead that the deportations “will compound the suffering of those who are already victims.”

“Crime is defeated by confronting the perpetrators not by punishing victims,” he said. “This scheme will increase the difficulties of those hoping for a new beginning, and it does nothing to address the problems which cause people to flee their homes.”

He urged that U.K. policy should “be guided by the four verbs provided by Pope Francis in our approach to migrants and refugees, ‘Welcome, protect, promote and integrate.’”

More than 28,000 migrants entered the United Kingdom across the Channel last year, up from 8,500 in 2020. Dozens have died, including 27 people killed after one boat capsized in November.

In an FAQ on the plan hosted by the Jesuit Refugee Service UK, Policy Officer Sophie Cartwright argued that resettlement in Rwanda did not represent a safe option for deportees. “Out-of-country processing has resulted in severe human rights abuses in the rare other contexts where it has been attempted,” she wrote, noting that Australia’s offshore detention regime on Nauru and Manus Islands in Papua New Guinea has led to “years of human suffering” among increasingly hopeless detainees. Twelve people have died since the Australian deportation policy began in 2013.

“Men, women, and children have suffered inhumane treatment and medical neglect, and years of indefinite detention led to self-harm, widespread suicidal ideation, and suicide,” she wrote. “We have no reason to expect this will turn out better.”

While a major precedent is at stake, the number of people immediately affected by the cases has been steadily whittled down as lawyers challenge the merits of each deportation order. The charity Care4Calais said all but seven of the 31 migrants originally told they would be on the flight to Rwanda have had their tickets canceled.

The leadership of the Church of England joined the condemnation of the plan in a joint letter to the Times of London on June 14.

“Whether or not the first deportation flight leaves Britain today for Rwanda, this policy should shame us as a nation,” the letter said. “The shame is our own, because our Christian heritage should inspire us to treat asylum seekers with compassion, fairness and justice, as we have for centuries.”

This report was updated on June 15 following the cancelation of the first scheduled deportation flight.