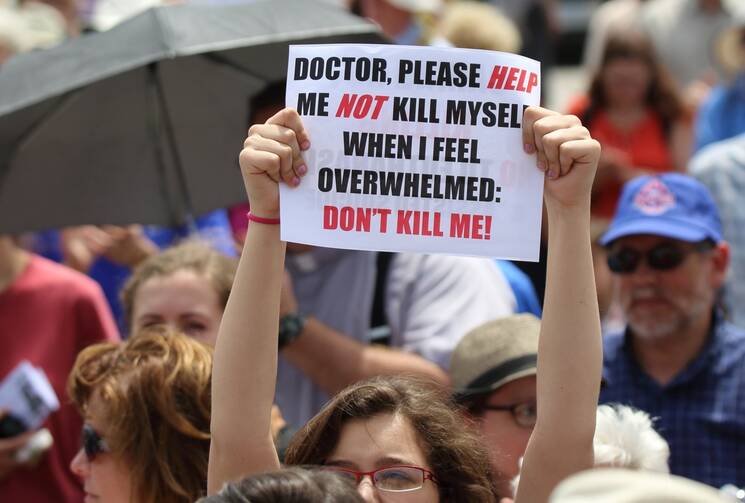 A rally against assisted suicide on Parliament Hill in Ottawa, Ontario, in October 2020. (CNS photo/Art Babych)

After years struggling in vain to find an apartment adapted to relieve the symptoms of her acute environmental hypersensitivity, a Canadian woman applied for and received preliminary approval for medical assistance in dying. Although that process continues, the young woman told supporters in May that an unexpected showing of generosity from a social media campaign has persuaded her that she may yet be able to find a long-term housing solution and she remains hopeful that there may be other options to reduce her suffering, at least in the short term. Her case worries many in Canada who perceive a slippery slope of expanded access to medical aid in dying for people suffering because of environmental sensitivities.

The 31-year-old Toronto woman, identified to the media only as “Denise” to protect her privacy, has an inherited condition called Ehlers-Danlos syndrome, which causes various spinal disorders like craniocervical instability that can produce headaches, memory issues and an inability to concentrate.

A great deal of her day-to-day suffering could be avoided, if she were placed in appropriate housing. “It’s not like there is nothing in the world that could help me.”

Due to this rare underlying condition, Denise uses a wheelchair. She has developed 16 other diagnosed disabilities and illnesses, including multiple chemical sensitivities. Her environmental hypersensitivity means that she can experience dramatic allergic reactions when exposed to very low levels of chemicals like those found in laundry detergents, air fresheners or cigarette smoke.

A great deal of her day-to-day suffering could be avoided, Denise said, if she were placed in appropriate housing. “The most devastating part, my spine condition, it’s not like there is nothing in the world that could help me.”

Her illness deprives her of energy, and Denise is careful how she allocates her time each day, but she shared her story with America during a brief interview. “There is surgery and treatments,” she said. “There is a neurosurgeon [in the United States] who could treat me, but I can’t afford it.”

Her specific spinal condition cannot be treated in Canada, she said. According to her calculations, treatment in the United States would cost between $100,000 and $200,000.

Similarly, Denise has been struggling for almost eight years to find an apartment she can afford that is designed to reduce leaching of the contaminants that aggravate her symptoms.

She reports that her symptoms have improved dramatically in recent weeks, after she was rehoused in a hotel with good air circulation, windows open to green spaces and limited exposure to smoke and chemicals from laundry detergents and air sanitizers. “I’m not in survival mode anymore,” she said. “I’m not gasping for air; I don’t have to wear a mask to sleep; and I see a reduction in migraines and other symptoms.”

Denise has been struggling for almost eight years to find an apartment she can afford that is designed to reduce leaching of contaminants that aggravate her symptoms.

Her hotel stay is being funded through a GoFundMe campaign, “Save a Life with Safe Housing,” launched by Well Earth Collaborative, a group that supports patients like Denise who live with chronic conditions linked to environmental sensitivity.

The campaign’s organizers hope to raise enough money to help Denise rent or make a downpayment on an accessible and suitable stand-alone home in Toronto “close to all the medical services she continues to need on a regular basis to manage her conditions.” It is thanks to this campaign that Denise regained some hope of improving her situation and decided to put the MAiD procedure on hold.

According to reports in Canadian media, she receives a provincial disability payment of just over $1,200 a month, a figure that keeps her below the poverty line in Canada. That level of income is hard enough to live on in the best of times, she said, but Canada is experiencing a severe housing shortage and rents have risen substantially.

She has been seeking assistance from government and private housing assistance agencies without success in cities across Canada. “I reached out to human rights centers, clinics. I have reached out everywhere that I possibly can,” she said. Denise told Canadian media that applying to government authorities for assistance with dying proved far easier than dealing with the housing bureaucracy.

She has been on a waitlist for subsidized housing for seven years now. “It leaves me just feeling hopeless,” she said, just days before the success of the GoFundMe campaign gave her new hope.

Applying to government authorities for assistance with dying has proved far easier than dealing with the housing bureaucracy.

After applying for Medical Assistance in Dying over the summer last year, Denise quickly received preliminary approval. “I chose MAiD because I’m stuck living in abject poverty,” she said. She explained that she had been feeling emotionally and physically exhausted, as well as increasingly hopeless about finding relief for her suffering.

She had been making final preparations and awaiting a final O.K. for her assisted death when the online campaign persuaded her that a pause in the process was appropriate.

The tip of the iceberg?

Denise’s case is not the first of its kind in Canada. In February, a 51-year-old Canadian woman identified as Sophia, who also had multiple chemical sensitivities, went through with her decision to die with medical assistance after struggling for years to secure an apartment free of smoke and chemicals. A Toronto man with chemical sensitivities was removed from the MAiD list after he was placed in housing adapted to filter out chemicals and his condition improved, CTV news reported.

Sophia’s and Denise’s experiences could open up the door for many more MAiD applications of this kind, David Fancy warned. Mr. Fancy is a drama professor at Brock University who sponsored the GoFundMe campaign for Denise with Well Earth Collaborative. “There are dozens of other people who have said they could take their own lives in the same way,” he said. “There is a high rate of suicide among the people with environmentally linked conditions and hundreds of thousands of people living with varying levels of environmental sensitivity [in Canada], which means they need support and understanding.”

Speaking before Denise reconsidered her application for assistance in dying, Mr. Fancy said, “If Denise had sufficient social services, she would be able to reduce her suffering and she might not be forced to take this extreme step. Patient autonomy could have been increased by giving people access to social services, but that didn’t happen.

“If housing and vulnerability are even part of the reason people are asking for MAiD, then we have a very serious ethical problem with that.”

Denise’s case demonstrates “the failure of social services” and the “slippery slope” on which MAiD has embarked, said Bishop Noël Simard, spokesperson on ethical issues for the Canadian Conference of Catholic Bishops.

“I think this case is really the tip of the iceberg [that reveals] an incredible failure of social services,” he said. “You don’t want to die because you don’t have housing—it’s unbelievable! I am horrified to see that we accept medical assistance to die for a situation that could have been resolved differently.

“We are moving toward an easy solution instead of [finding] the means to support a person and helping her to have better living conditions,” Bishop Simard said. “This is a social and economic issue, but it shows that our society is trivializing death. We’re still in the process of making euthanasia more and more accessible, and I find that incredibly dangerous.”

“I do think that, for people who support MAiD, [this case is] not what they had in mind when they were talking about compassion in pain and suffering,” said Moira McQueen, executive director of the Canadian Catholic Bioethics Institute. Denise’s case sets “kind of a dangerous precedent in terms of consent for people with mental health issues.”

Concerns about the expansion of the law

As a result of a Canadian Supreme Court ruling, medically assisted dying has been legal in Canada since 2016. In March 2021, Bill C-7 was amended to remove the requirement that a person’s natural death be reasonably “foreseeable” before assistance in dying is permitted. Beginning in 2023, Canada could become one of the only countries in the world allowing patients with severe mental health problems to appeal for MAiD, despite the difficulty for doctors in determining which conditions are likely to progress and which can respond to treatment.

Canada could become one of the only countries in the world allowing patients with intractable mental health problems to appeal for medical assistance in dying.

Canada will “soon be closer to offering universal death care than passable medicare,” columnist Sabrina Maddeaux commented wryly in the National Post on May 2.

“MAiD should function as a compassionate option, not as the only option for Canada’s most physically, economically and psychologically vulnerable when the state fails to meet their most basic needs,” she said.

“If Canada is to expand MAiD and become one of the world’s most permissive jurisdictions [for assisted dying], it must ensure individuals have true autonomy,” she added. “This necessitates providing the basic minimum standards of living and care to balance the scales against such a grave alternative. We cannot in good conscience become a nation where people are freer to die than they are to live without suffering.”

“This is a very disturbing trend,” said Kerry Bowman, a bioethicist and assistant professor at the University of Toronto. “If housing and vulnerability are even part of the reason people are asking for MAiD, then we have a very serious ethical problem with that.

“The question is, what are we going to do about it?” Ms. Bowman asked. “Our health care system is under so much pressure because of the pandemic; there are so many problems in the world now with the war [in Ukraine], and my concern is that this is going to get really little attention. Some of these very important issues will not be addressed.

“I’m not saying stop MAiD,” she added, “but it needs to be done in conjunction with humanitarian support for people who are sick.”

Will Denise’s and Sophia’s cases and the potential abuses associated with lack of access to dignified housing be addressed as part of MAiD’s expansion? Ms. Bowman hopes that the stories of these two women will, at the very least, shed light on the effects of the law’s expansion on vulnerable people.

Mr. Fancy urged a police investigation to review the decisions of the doctors who signed off on Denise’s MAiD application without contacting other resources that could have allowed her to find an apartment modified for her special needs.

“There is a need to raise awareness that existing service providers are not equipped to help people with environmental sensitivities,” he said.

For her part, Denise hopes her story will shed light on the lack of services for people with spinal disorders and multiple chemical sensitivities. “I wish for myself and others that there were safe places built with environmental counseling,” she said. “I hope we can help others to never be in this situation.” 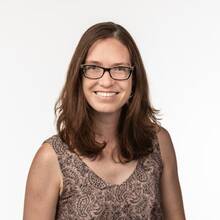 @MirianeDL
Show Comments ()
Join the conversation: Login or create an account
Before you can comment, you need to update your profile to include your first and last name, as required in our comments policy. Then reload this page and you'll be set up for commenting. Update your profile