Hope, healing and hospitality: A ministry of restorative justice is growing in Chicago 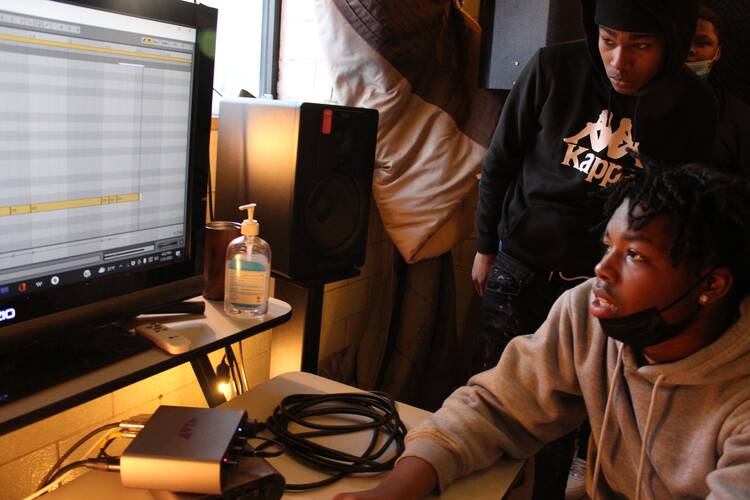 Precious Blood Ministry of Reconciliation is a longtime Chicago-area promoter of restorative justice, an approach to criminal justice that encourages reconciliation between victim and offender. Known as P.B.M.R., the ministry “reaches out, supports and accompanies people impacted by violence and incarceration,” said David Kelly, C.PP.S., executive director and founder of the organization.

Father Kelly founded P.B.M.R. after 40 years of experience in prison ministry in Chicago, including 35 years at Kolbe House, a ministry of the Archdiocese of Chicago serving inmates at Cook County Jail. “What started this ministry is the inability or unwillingness of the courts and the criminal justice system to work on healing and repair,” he said.

David Kelly, C.PP.S.: “What started this ministry is the inability or unwillingness of the courts and the criminal justice system to work on healing and repair.”

Seeing the system focus on isolation and punishment instead of accountability and support, he realized, “‘We can do better than this.’ So we started P.B.M.R. as a means to support both victims and offenders and, when possible, to bring them together to support their own healing.”

Its approach to restorative justice has three central tenets: radical hospitality, welcoming all people into relationship so that P.B.M.R. can accompany and support them; healing, bringing the victim and the offender back together in reconciliation; and hope, equipping program members with the skills and opportunities they need to build a better future.

With programs from housing support to workplace development to art therapy, Precious Blood Ministry of Reconciliation serves formerly incarcerated people, their families and those struggling with crime or victimization. The ministry is located on the South Side of Chicago, which has historically struggled with cycles of poverty and crime. Founded in 2002, the organization is celebrating its 20th year of service. It is being recognized for its record of reconciliation with the second annual Berrigan-McAlister Award for Christian nonviolence, which P.B.M.R. is being awarded on May 10.

The award, bestowed by DePaul University, commemorates the late Catholic peacemakers Daniel and Philip Berrigan and Elizabeth McAlister, Philip Berrigan’s wife and collaborator. The three were known for their anti-war efforts during the Vietnam War and their years of civil disobedience and nonviolent protest against war, nuclear terror and the weapons industry that followed. The Berrigan-McAlister award recognizes those practicing Christian nonviolence that “resists injustice, transforms conflict, fosters reconciliation, and seeks justice and peace for all.”

One of the first programs Precious Blood Ministry of Reconciliation launched was victim-offender reconciliation circles, bringing together those who committed a crime and those who were affected by it.

At the core of everything P.B.M.R. does is a central idea of relationships. “We’re relational first, and programmatic second,” said Father Kelly. To be able to help somebody, he says, you first have to understand where they are coming from and what they need. And to heal a community wounded by crime, you have to bring community members back together after victimization has divided them.

“Restorative justice is a philosophy of relationships and building relationships and knowing that we’re interconnected with one another,” Father Kelly explained. “And so out of that relationship, when there’s a harm done, then you strive toward repairing that harm.”

Restorative justice is a way of responding to crime that emphasizes the dignity of the offender as well as the victim. The criminal justice system focuses on isolating and punishing offenders, with no support for the formerly incarcerated once they are released, Father Kelly said. Restorative justice focuses instead on how to reintegrate offenders back into the community, supporting both them and their victims in the aftermath of incarceration.

One of the first programs P.B.M.R. launched was victim-offender reconciliation circles, bringing together those who committed a crime and those who were affected by it. The circles create a greater understanding of what drove the offender to the crime and how it hurt the victim and the community.

It offers the perpetrator the chance to learn from their mistakes in understanding the harm they have caused, but also an opportunity to express their unmet needs or struggles—homelessness, pressure to join gangs, desperation. The circles bring the community together and bring larger attention to the structural forces of racism, poverty and disenfranchisement that cause crime, Father Kelly said, while also encouraging individual accountability.

Restorative justice is a way of responding to crime that emphasizes the dignity of the offender as well as the victim.

Other initiatives by P.B.M.R. aim at creating a better future for those involved in the criminal justice system. The ministry offers free housing for those being released from prison, a safe place to stay while they adjust to re-entry and begin the difficult process of finding work. P.B.M.R. helps in this arena too: A workplace development program prepares its members to not only find employment but also develop a long-term career capable of sustaining a family.

The ministry also works with young people in a job readiness program through their art labs. P.B.M.R. also offers screen printing, carpentry and urban gardening, which gives young people an outlet to express their feelings, as well as an opportunity for job experience in running the labs. This is a newer outreach program for the ministry.

The art labs were not Father Kelly’s idea (“It’s a slow day of my life when I go to an art gallery,” he joked), but a response to needs expressed by neighborhood young people. Art therapy can be an effective way of processing trauma as well as a powerful source of advocacy, according to Father Kelly. Instituting the art labs helps amplify young people’s voices while giving them the tools to overcome their struggles. Paired with mentorship and educational support to get a high school diploma, P.B.M.R. helps young people build their futures and avoid the justice system entirely, all while also working with offenders returning to the community and their lives.

But the biggest challenge for P.B.M.R. is even harder than providing jobs, housing, mentorship or other opportunities. It is fighting to change the narrative around incarceration and justice entirely. “This city has to start to see that communities have to be involved in their own wellbeing,” Father Kelly said. “We spend billions of dollars incarcerating and it really furthers the harm. And we’re not dealing with people who are coming home.”

To change the justice system, P.B.M.R. works not only to engage communities but to challenge the courts to find better solutions to deal with offenders. “Somehow, some way, we have to change that narrative and allow people with power to really understand what restorative justice is and what the impact of restorative justice is,” Father Kelly said. “If change is going to happen, it’s going to be because of the community, not because of the systems. Systems don’t have the relationships; community does.”