On Russian oligarchs and ours: we need to talk about our billionaire problem 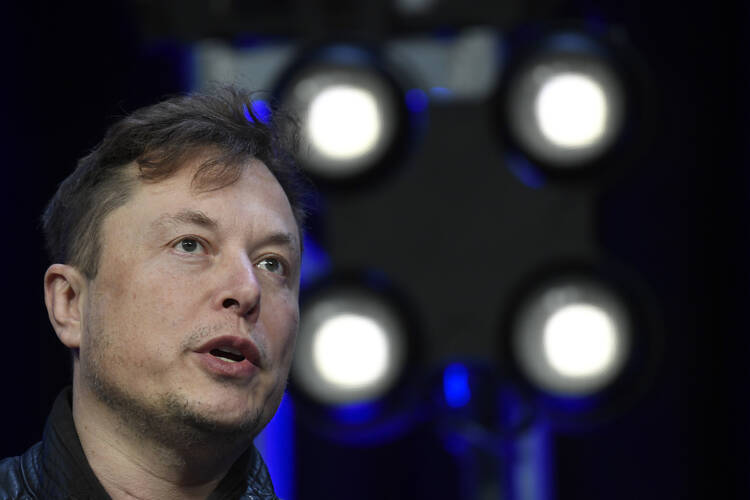 Elon Musk, now estimated to be the wealthiest individual in the world, speaks at a technology convention in 2020. (AP Photo/Susan Walsh, File)

The Russian invasion of Ukraine has brought new attention to a powerful circle of former Soviet bureaucrats and Yeltsin-era entrepreneurs who emerged in the 1990s as Russia’s billionaire boys club. These Russian oligarchs have been self-enriching co-conspirators in Vladimir Putin’s authoritarian revival and, by extension, in his misadventure in Ukraine. Their outsized role in determining Russia’s political, cultural and economic fate has properly been scrutinized and lamented.

Now Elon Musk’s apparent acquisition of the influential social media platform Twitter, purportedly in defense of free speech, reminds Americans that another gang of global billionaires have, perhaps less obviously, assumed an equally powerful role here at home. Many of these actors—because of their vast fortunes or their willingness to embrace the celebrity of wealth—are as well-known as Tesla’s Mr. Musk, who moved into the No. 1 spot in global wealth, at $242 billion, in late April. And many were part of the explosive growth of personal wealth associated with emerging technologies or new social media communications platforms: Amazon founder, Washington Post owner and space-ist Jeff Bezos ($167 billion); Facebook’s (O.K., Meta’s) Mark Zuckerberg ($65 billion); Larry Page ($103 billion) and Sergey Brin ($99 billion) of Google, now Alphabet; investing sage Warren Buffet ($120 billion); and Microsoft founder Bill Gates ($130 billion).

Elon Musk’s apparent acquisition of Twitter is a reminder of the power that a gang of global billionaires wields in the United States.

While millions of Americans struggled to adapt to Covid-19 and still get by in 2021, the nation’s wealthiest, well, got even wealthier. According to Forbes’ annual report, the 400 richest Americans saw their collective fortune increase 40 percent last year, to $4.5 trillion.

Some of these oligarchs have made their interest in bending the trajectory of American and global history reasonably clear through the foundations they established to manage and distribute their wealth—the venture philanthropy in global health and anti-poverty efforts of the Gates Foundation; the libertarian business and political philosophies subsidized by the various charities established by the fossil-fuel-enriched Koch brothers; and Paypal titan Peter Thiel’s various investments in scary modern populism and what Vanity Fair deemed this month “the New Right.”

Meanwhile, billionaire philanthropist MacKenzie Scott ($41 billion), the former wife of Amazon’s Bezos, has announced her intention to give away at least half of the vast wealth transferred into her direct control after her divorce. Among the initial beneficiaries was Planned Parenthood Federation of America, which received a $275 million donation, the largest in its history.

Among the deeply conservative initiatives supported by the Koch brothers (and perhaps other billionaires—its funding sources are opaque) is the American Legislative Exchange Council. A.L.E.C. has been described as a “corporate bill mill.” The group authors model state and national legislation on the environment, health care, labor and education that is slowly reshaping American life.

Some U.S. oligarchs have made their interest in bending the trajectory of American and global history clear through foundations that manage and distribute their wealth.

But other U.S. oligarchs prefer a lower public profile. Researchers at Northwestern University coined the phrase “stealth politics” to describe the style of influence-investing they favor—but that has not meant that their expression of oligarchic influence has been less potent than that of the cabal that surrounds Mr. Putin in Moscow.

According to the Northwestern academics, interviewed in The New York Times this month, U.S. billionaires contribute an average of $500,000 individually each year to political campaigns. At least, that is the amount we know about. Much more is deployed as the untraceable political “dark money” O.K.’ed by the Supreme Court’s Citizens United decision in 2010. The Times’s Jaime Lowe reported that 40 percent of all political donations in the United States come from the top 1 percent of the top 1 percent.

These disbursements tend to support political campaigns at the state and local levels, Ms. Lowe writes, “where many crucial pocketbook issues are decided, often outside the scrutiny of the national media…. In some states, that has meant a reduction in the pensions and collective bargaining rights of public-sector workers and the rejection of Medicaid extensions.”

Researchers coined the phrase “stealth politics” to describe the style of influence-investing they favor.

It is perhaps not a shock to discover U.S. oligarchs are generally interested in promoting policies that protect their wealth or allow them to accumulate more of it while countering legislation or social campaigns that promote income-building or wealth-equity efforts, or that protect the environment but add to industrial production costs. Is it time this collective power were restrained by sensible tax policies aimed at reducing the billionaire class’s accumulating economic and political might?

Apparently, a lot of Americans don’t perceive this as a national crisis—yet. A survey from the Pew Research Center in 2021 found that a narrow majority of Americans (55 percent) continue to say billionaires are neither a good thing nor a bad thing for the country, but a growing minority are beginning to have their doubts. Pew reports that 29 percent of Americans say the fact that there are some people who have personal fortunes of a billion dollars or more is a bad thing for the nation—up from 23 percent in 2020—while the share who say having billionaires is a good thing for the country decreased from 19 percent to 15 percent over that period.

Pope Francis has in recent years regularly dressed down the world’s wealthiest for not only declining to do their part to mitigate ecological and human suffering but for elevating the care and feeding of their personal fortunes as the primary good. In these pandemic times, Francis has talked a lot about building back a better world, one that includes a thorough examination of conscience of the role of finance and wealth in human economic and spiritual development and the protection of creation.

In doing so, he turns not to Marxist or Peronist economic doctrine for inspiration, as his many critics like to allege. His source material is simultaneously deeper and more simple. Despite what America’s prosperity gospelites prefer to believe, Jesus was not shy about his distaste for wealth accumulation and the personal and social imbalances, long before Marx, it seemed to produce.

In fact the only time Jesus absolutely lost it, despite all those stupefying questions from his impenetrable disciples, was among a crowd of moneylenders in the temple. He was fond of telling rich people to sell all they owned and give it away immediately to the poor, not package it as return-required “philanthropic investments,” and was pretty clear that wealth bloat would prove to be a clearance obstacle at the heavenly gates.

In today’s world of growing want, particularly with a vast hunger crisis driven partly by the war in Ukraine looming before us, he would not be on board with using an obscene amount of personal wealth to purchase a social media platform with an AOL-level life expectancy and a propensity for making raging narcissists somehow worse.

It’s just not a good investment.