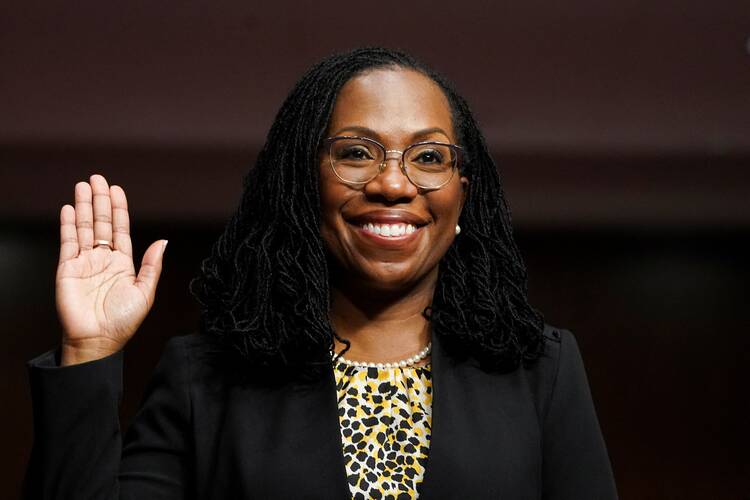 WASHINGTON (CNS) — Under gray skies March 30, a group of faith leaders assembled on the Supreme Court’s steps to show their support for Judge Ketanji Brown Jackson’s nomination to the Supreme Court and urge the Senate to quickly vote to confirm her.

The hourlong gathering—a combination rally and prayer service—primarily involved faith leaders speaking of their admiration for the judge interspersed with prayers for her and encouraging the small crowd to join in “K.B.J.” cheers.

The rally took place as Jackson was meeting with individual senators and just hours after Senator Susan Collins, Republican of Maine, announced on her website that she plans to vote to confirm Jackson. Ms. Collins said Judge Jackson has the “experience, qualifications, and integrity to serve as an associate justice.”

“We need her,” Mary Novak, executive director of Network, a Catholic social justice lobby, said at the rally about Judge Jackson. She also spoke of the grace the judge demonstrated during the confirmation hearings and said that going forward: “Network’s got your back.”

On March 28, the Senate Judiciary Committee scheduled an April 4 vote on Judge Jackson’s nomination, with the full Senate expected to vote later that week.

“We need her,” Mary Novak, executive director of Network, a Catholic social justice lobby, said at the rally about Judge Jackson. “Network’s got your back.”

It takes a simple majority of the Senate—51 votes—to confirm a Supreme Court nominee.

Senate Minority Leader Mitch McConnell, Republican of Kentucky, has announced he would oppose Judge Jackson’s confirmation as have other Republican senators.

On March 29, Network delivered a letter with more than 2,800 signatures—1,176 of them from Catholic women religious—to Senator Dick Durbin, Democrat of Illinois, chairman of the Judiciary Committee, urging the committee to confirm Judge Jackson “with bipartisan support and all deliberate speed.”

“It is long past time to have a Black woman on the nation’s highest court,” the letter said. “Having Judge Jackson on the court will enrich judicial decision making, increase public trust in our courts, and move us closer to a court that better represents the experiences of all people and families in the United States.”

More than 2,000 people also signed a similar online letter issued by Faith in Public Life, a Washington-based advocacy group, calling for the Senate to confirm Judge Jackson to the nation’s high court.

More than 2,000 people also signed a similar online letter issued by Faith in Public Life, a Washington-based advocacy group, calling for the Senate to confirm Judge Jackson to the nation’s high court.

The letter notes that when Jackson’s nomination was announced, she said she has come this far by faith. “Together in faith, we must complete our country’s long journey to equal justice. Senators, confirm Judge Jackson to the Supreme Court swiftly. Our nation has stalled for far too long.”

The rally at the Supreme Court was co-sponsored by Network, Faith in Public Life, Catholics for Choice, Center for American Progress Religion and Faith, National Council of Jewish Women and People For the American Way.

During the confirmation hearings, Judge Jackson was asked about her role as a judge and a public defender and her views on abortion, critical race theory and her own faith.

Judge Jackson, a judge on the U.S. Circuit Court of Appeals for the District of Columbia Circuit, was also asked by Republican senators about her defense of Guantanamo Bay detainees and sentences she gave in child pornography cases.

The 51-year-old nominee said that as a federal judge, she has always taken seriously her responsibility to be independent.

She also said it was “extremely humbling” to be considered for Justice Stephen Breyer’s seat on the court and added that she “could never fill his shoes,” but if she were confirmed, she hoped she would “carry on his spirit.”

Judge Jackson was asked a few times March 22 about her abortion views. Senator Dianne Feinstein, Democrat of California, asked Jackson, as she has asked the past three court nominees, if Roe v. Wade, the court’s 1973 decision legalizing abortion nationwide, was settled law. Jackson, as other nominees before her have done, agreed the court’s decision was a binding precedent.

The hourlong gathering—a combination rally and prayer service—primarily involved faith leaders speaking of their admiration for the judge interspersed with prayers for her.

Later when she was asked by Senator John Kennedy, Republican of Louisiana, if she has a personal belief on when life begins, she said she did.

“I have a religious belief that I set aside when I am ruling on cases,” she told the committee.

At the end of the March 22 questioning, Senator Marsha Blackburn, Republican of Tennessee, asked if Judge Jackson would respect the Supreme Court’s decision if it overturned Roe v. Wade later this year in its decision on a Mississippi abortion case. Judge Jackson said she would treat it as she “would any other precedent.”

Earlier that day, Senator Lindsey Graham, Republican of South Carolina, asked Judge Jackson about her faith and she responded that she is “Protestant, nondenominational.” When pressed further about how important her faith is to her, she said that it was very important but added: “There is no religious test in the Constitution under Article 6.”

She also said it’s very important to “set aside one’s personal views about things” in the role of a judge.